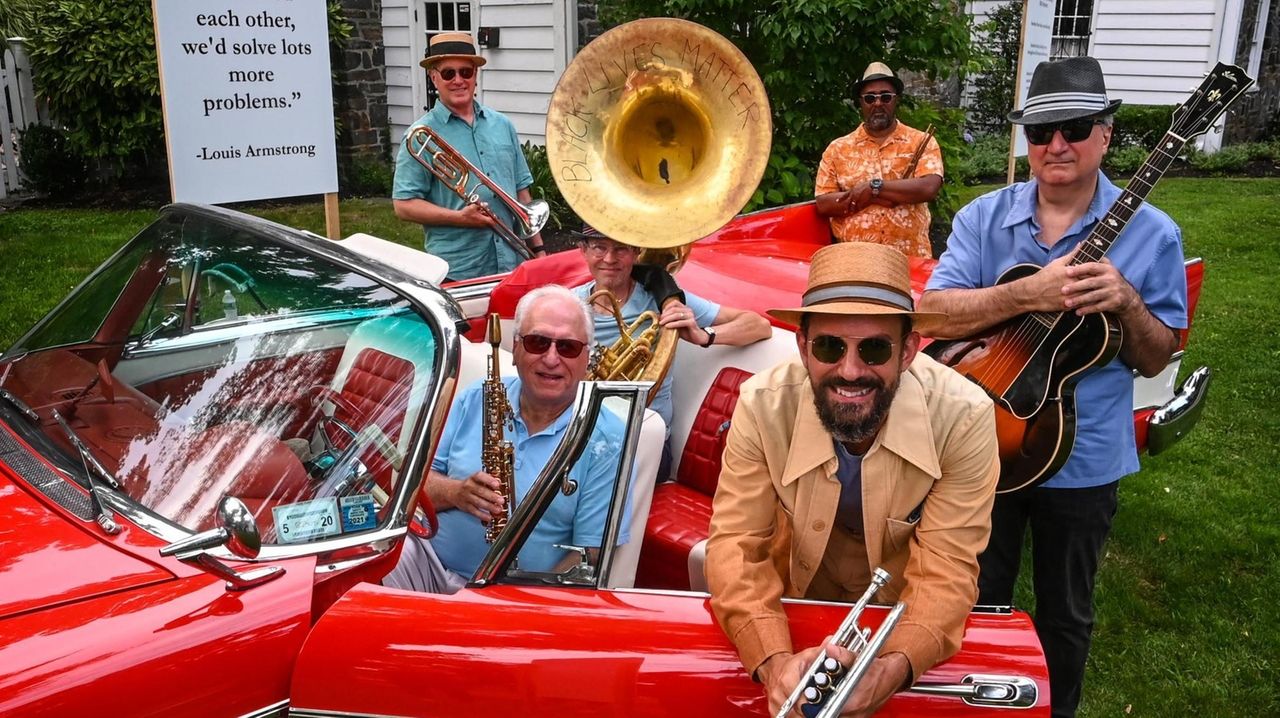 The Jazz Loft of Stony Brook launched a three-date tour of pop-up jazz performances with a six-piece New Orleans street band at various locations throughout the village via classic convertible cars. Credit: Newsday / Thomas A. Ferrara

Call it band on the run. A six-piece New Orleans-style street group has been traveling around Stony Brook village giving pop-up jazz performances at various locations, courtesy of The Jazz Loft.

“People have been telling me they miss the music,” said Thomas J. Manuel, president and founder of the Jazz Loft, a Stony Brook nonprofit organization, which focuses on jazz preservation, performance and education. “We are doing quick, socially distanced appearances throughout the town — one tune and we’re out.”

Due to the restrictions of the pandemic, these musicians can’t draw a large crowd. In order to keep active and the music flowing, the players took to the streets.

“We play distanced from each other and from whatever people are there,” said Manuel. “No one is getting in people’s faces. We just want them to hear the music.”

The Jazz Loft All Stars consist of Joe Carbone, 65, of North Babylon on soprano saxophone, Ellis B. Holmes III, 59, of Selden on marching snare drum, Steve Salerno, 59, of Huntington on acoustic guitar, Rod Borrie, 73, of Setauket on trombone, Ray Anderson, 67, of Setauket on Sousaphone and Manuel on cornet. They travel from location-to-location via two vintage cars — a 1935 Cadillac convertible and a 1957 Plymouth convertible.

“We chose convertibles in order to be as outdoors as possible,” said Manuel. “This way all of us can jump out with our instruments, stand in a circle and just play instantly.”

The three-date mini tour has been dubbed, “Operation: Spirit” and serves as a rallying call for the community.

“Since the birth of jazz, we have never had an unprecedented stop of live performances like this,” said Manuel. “Our goal is to lift people’s spirits.”

On opening night earlier last month the band broke out into “Joe Avery Blues” in the parking lot of Mirabelle at Three Village Inn taking outdoor diners by surprise.

“We play stuff that gets your feet tappin’ and your fingers clickin’,” says Carbone. “This is better than staying home.”

The group later arrived at the Stony Brook Yacht Club’s back patio which got Lynn Sabatelle, 69, of Stony Brook excited.

“This is really nice,” said Sabatelle, “especially seeing Ray Anderson, who is a very cool guy.”

As the band kicked into “Bourbon Street Parade,” Dan Hayes, 39, of Stony Brook, shouted out, “That’s my favorite song!” He was enjoying his first night out with his newborn son Henry and his wife Melissa, who said, “The baby didn’t even cry.”

Moving on to the Hercules Pavilion, the band played “Deuces Wild” where Holmes took a drum solo.

“It’s my job to keep the beat going and create that groove for everybody,” said Holmes. “I try to set a strong foundation for the rest of the band to build on.”

Danielle Ragonese, 40, of St. James was following the band since its first stop with her 17 month-old son, Rio.

“I feel like it’s been so long since I heard live music so this is quite enjoyable,” she said.

Across the street, the band performed on the lawn of Pentimento restaurant where they broke out, “No, It Ain’t My Fault.”

“I like this kind of jazz because it’s very upbeat,” says Lou Campo, 62, of Holtsville as he watched.

Restaurant owner Dennis Young added, “These guys are always amazing and we are lucky to have them in this area.”

The musicians were simply elated to be back together playing live in front of people.

“We’ve missed seeing and playing with one another,” said Salerno. “This time has been a tremendous artistic blow to all of us.”

“When the Saints Come Marching In” was the song of choice at Bliss restaurant where Suffolk County Legislator Kara Hahn was dining.

“I think what they are doing is important,” she says. “Hearing the live music gives people a nice break and a little sense of normalcy.”

Manuel felt recharged from the experience and he said he's pleased with the results.

“The music doesn’t come alive until there’s people listening,” said Manuel. “When that sound goes in the air and is received by people who are clapping along, the connection is made. That’s as close to magic as anyone could ever get.”

THE JAZZ LOFT ALL STARS