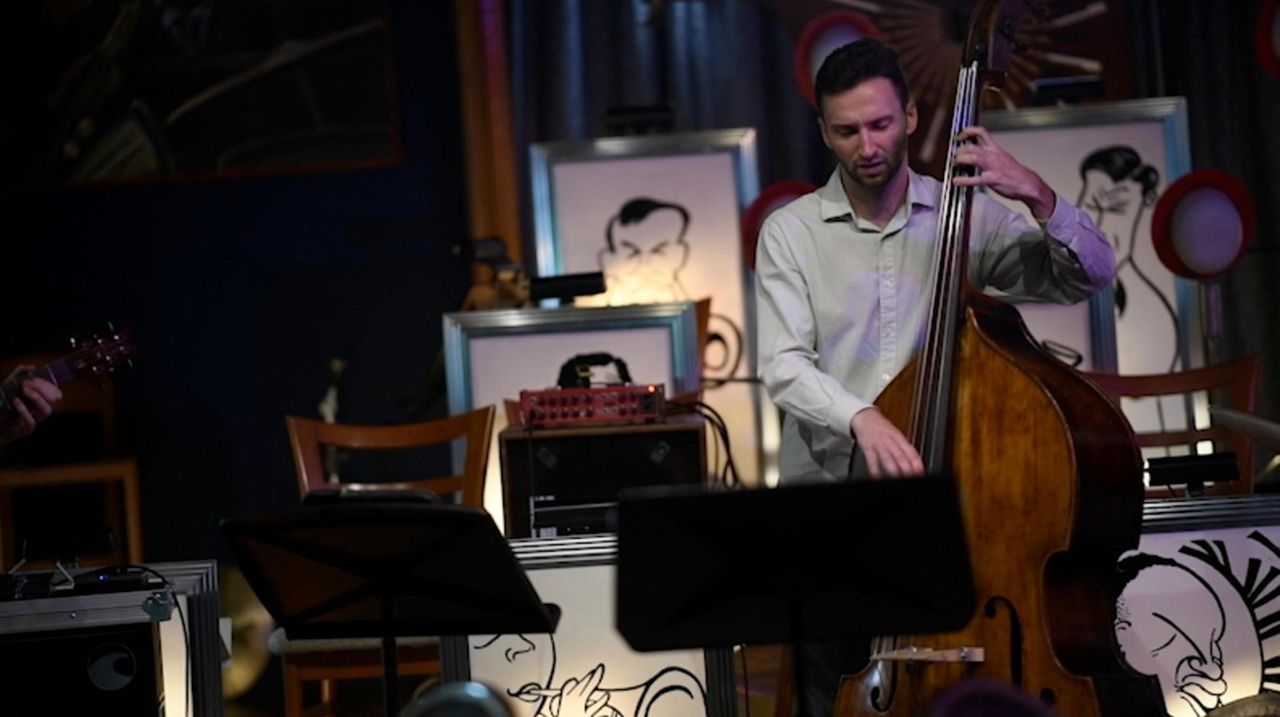 The Jazz Loft in Stony Brook offers a weekly jam session for people of all ages and abilities to perform onstage. Credit: Andrew Theodorakis

Every Wednesday night there’s a smokin’ jazz jam session going on . . . in Stony Brook? Indeed, this historic North Shore village has quietly being harboring a premiere speak-easy, The Jazz Loft.

A nonprofit organization, run by volunteers in an old firehouse, it began three years ago focusing on jazz preservation, performance and education including midweek jams, weekend concerts and an annual festival in September.

“We put on 160 performances a year,” says president and founder Thomas J. Manuel. “We have some of the same acts that are going through New York City jazz clubs like Birdland and Blue Note.”

Walking into The Jazz Loft, visitors encounter a 6,000-square-foot museum filled with 800 jazz artifacts that Manuel has gathered through the years. Vintage items on display range from Keely Smith and Louis Prima’s 1958 Grammy for Best Vocal Group to Lloyd Trotman’s 1953 stand-up acoustic bass used on Ben E. King’s recording of “Stand By Me.” In 2015, Manuel was offered a 49-year lease for $1 a year from the Ward Melville Heritage Organization to house his collection here. Since then, the space has hosted regular gigs and special events.

“This was a long shot and a big dream,” says Manuel, who is also a college music professor and trumpet player. “People might think jazz is for an older demographic. However, we have an incredibly balanced diverse crowd ranging from teenagers to octogenarians, which is cool.”

The top floor is the 90-person performance space which is bathed in blue and decorated with jazz themed art along the walls. The room has a 1920s vibe with a corner bar and cocktail tables spread across the hardwood floor. At a recent Wednesday night jam session, the band plays casually right in front of the bandstand — made from Roseland’s original dance floor — so attendees can feel the energy coming from the musicians. The first set serves as a 45-minute concert from bassist Keenan Zach’s trio with rotating players each week.

“It’s heavily improvised. We come up with the set list spontaneously,” says Zach, 31, of Coram. “We leave open spaces for each other to do something creative, and then let the music write itself.”

The trio noodles through standards like “Like Someone in Love,” “Black Orpheus” and “September in the Rain” to get the evening going.

“None of us have rehearsed, which is terrifying but exciting,” says guitarist Kieran McAuliffe, 23, of Setauket. “What comes out is something we could have never planned.”

The second set opens the floor to visiting musicians who come with their instruments hoping for a chance to sit in.

“The exciting thing is I don’t know who will come and play or what level they might be at or how many there will be,” says Zach. “Each week I strive to put together a show that creates a satisfying musical experience for the band and the audience.”

Pianist Tom Papell, 64, has been coming to the jam session for two years after being tipped off by a friend.

“This is the best jazz vibe anywhere. It’s not competitive but it’s also challenging,” says Papell, of Northport, who plays through “My Funny Valentine.” “The level of musicianship is very high, and it’s rewarding to perform with such good players.”

He trades off turns on the bench with fellow piano man Matt Godfrey, 25, of St. James who tickles the ivories on a few tunes.

“We all trust each other,” says Godfrey. “A lot of times not everybody knows how we are going to do the tune, but we come together in a moment of improvisation to cook up some jazz.”

Brendan Rivas, 18, is studying at LIU Post to become a profession musician. Since fourth grade he’s been playing the trombone and gets a solo on “Take the A Train” at the jam. Rivas, of Smithtown, says he finds the sessions very educational.

“It’s eye-opening the things you learn playing with the real cats as opposed to what you study in college,” he says. “It’s a whole different level here.”

WHEN | WHERE 7 p.m. Wednesdays at The Jazz Loft, 275 Christian Ave., Stony Brook