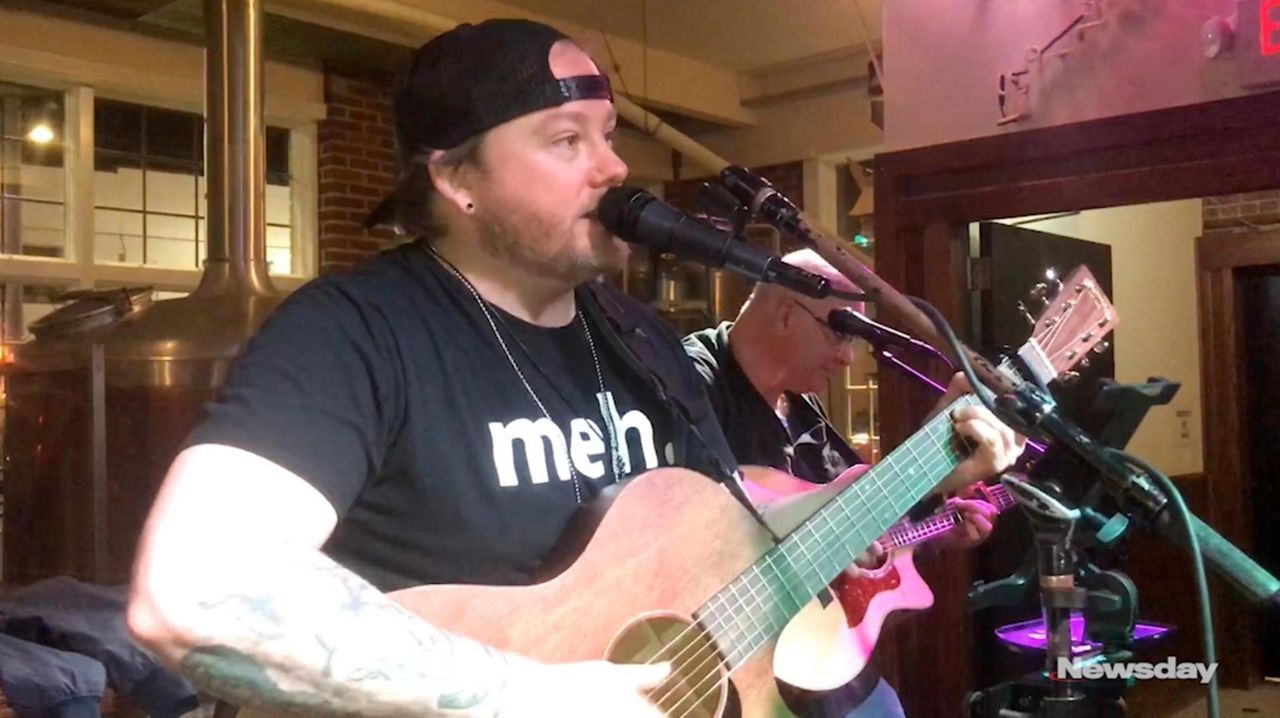 As part of singer-songwriter JD Leonard's routine, he plays cover songs, as well as his original hits, at BrickHouse Brewery in Patchogue during Friday night happy hour, getting his music out there and building his career.  Credit: Newsday / David Criblez

Singer-songwriter JD Leonard is about to go to work, but first he needs to make some moves to further his career.

“It’s important everything be done by April 17,” says Leonard, 37, of Medford, who is on his cellphone in a Patchogue parking lot with a music distribution company. “Will I be getting an email to finalize everything or should I check back in a week?”

April 17 is a big date for Leonard — he's releasing his new indie solo record, "Just Drive: The Album" and headlining at My Father's Place in Roslyn. But right now, it's time to get back to work.

Friday night happy hour is getting started at the BrickHouse Brewery in Patchogue. Leonard's the guy playing cover songs on the acoustic guitar, from Van Morrison and Prince to Eminem and Billy Joel, over the noisy din of drinks and end-of-the-week socializing.

“I feed off the crowd,” he says. “My attitude is — you tell me what to play and that exchange becomes fun.”

Leonard's a full-time musician who gigs more than 20 days per month at places like the Tap Room in Massapequa Park, Drift 82 in Patchogue and Treme in Islip. These events are Leonard’s main source of income, but not his main musical outlet. Every once in awhile, Leonard sneaks an original into his set, giving people a taste of his own music — Americana blending country, rock and soul.

“I’ve been doing this for a long time,” says Leonard, who has been playing around Long Island for more than 10 years. “There’s been good times and bad, ups and downs, but I still get to play music for a living and that’s a blessing.”

On this night Danielle Goff, 32, of Brentwood, who frequently comes to see Leonard, calls out for an original tune, “And Justice for All,” which is off the upcoming album. “I know I’m seeing him before his career explodes and that makes me proud,” she says. “I feel like I’m on the inside before he becomes a megastar.”

Matt Haszinger, 32, of Copiague has been a fan for 10 years — Leonard even played at his wedding two years ago. “To this day, my friends still say it was the best wedding they’ve ever been to,” says Haszinger. “I’ve been a fan from the first time I saw him.”

Leonard divides his time up carefully to make the maximum use of each day.

“My whole livelihood relies upon my work ethic. You have to learn to balance this lifestyle,” says Leonard. “I use the beginning of the week to allocate time to my solo career and I keep the later part of the week for the gigs that pay the bills.”

His busy season is coming — summer — when he might play three different spots in the same day.

“I’ll play a gig at Smith Point Beach in Shirley on a Saturday from 1 to 4 p.m. then pack up by 4:20 p.m. and head to Venetian Shores Beach in Lindenhurst where I’ll play 5:30 to 9:30 p.m.,” says Leonard. “I’ll pack up again and knock out a 10 p.m. to 1 a.m. set at Shandon Court in East Islip or even head into Manhattan for a late night/early morning gig from 1 to 4 a.m. at the Red Lion on Bleecker Street. Get home, sleep a bit then be at the next gig at noon the following day.”

“I loved his voice and thought his songs were fantastic. He deserves a shot,” says Byrnes, who joined Leonard’s solo band on guitar and secured some investors to help finance his album. “He has arena instincts. I can see him on a much bigger stage.”

Leonard recorded in Nashville, Tennessee, at Rascal Flatts’ studio, The Grip, with producer David Huff, who has worked on records with Kenny Chesney, Rascal Flatts, Lady Antebellum, Thomas Rhett, Faith Hill and Martina McBride. “His songs have the potential to be hits,” Huff says. “The title track, ‘Just Drive’ is so strong. It’s such a commercial tune.”

He’s opened for Michael McDonald at The Paramount in Huntington and Air Supply at NYCB Theatre at Westbury. Now, Leonard and his solo band are preparing to take the spotlight at My Father’s Place, which will serve as his album release party.

“We are looking forward to his show,” says Michael “Eppy” Epstein, owner of My Father’s Place. “JD’s songs are very sophisticated. He has all the elements needed to be successful.”

But Leonard has many gigs to go before he can focus on his own music. He arrives at Repeal in Garden City on a lazy Sunday afternoon for a duo show with Brother Dave Likhtiger, 40, of Manhasset.

“This is a more chill, low-key gig,” Leonard says. “If you want to be a working musician who plays enough to make a living, you have to know how to adapt. The vibe changes significantly from Friday night to Sunday afternoon.”

The place is pretty empty, save for a few people watching basketball at the bar while others are enjoying a quiet lunch in the background. By the end of his first set, the pub fills up, people are making requests and diners are shooting video clips of him performing.

“Passion and authenticity is infectious — it’s everything to me,” Leonard says. “As long as I can be authentic, and my passion comes through then I think I’m doing a good job.”