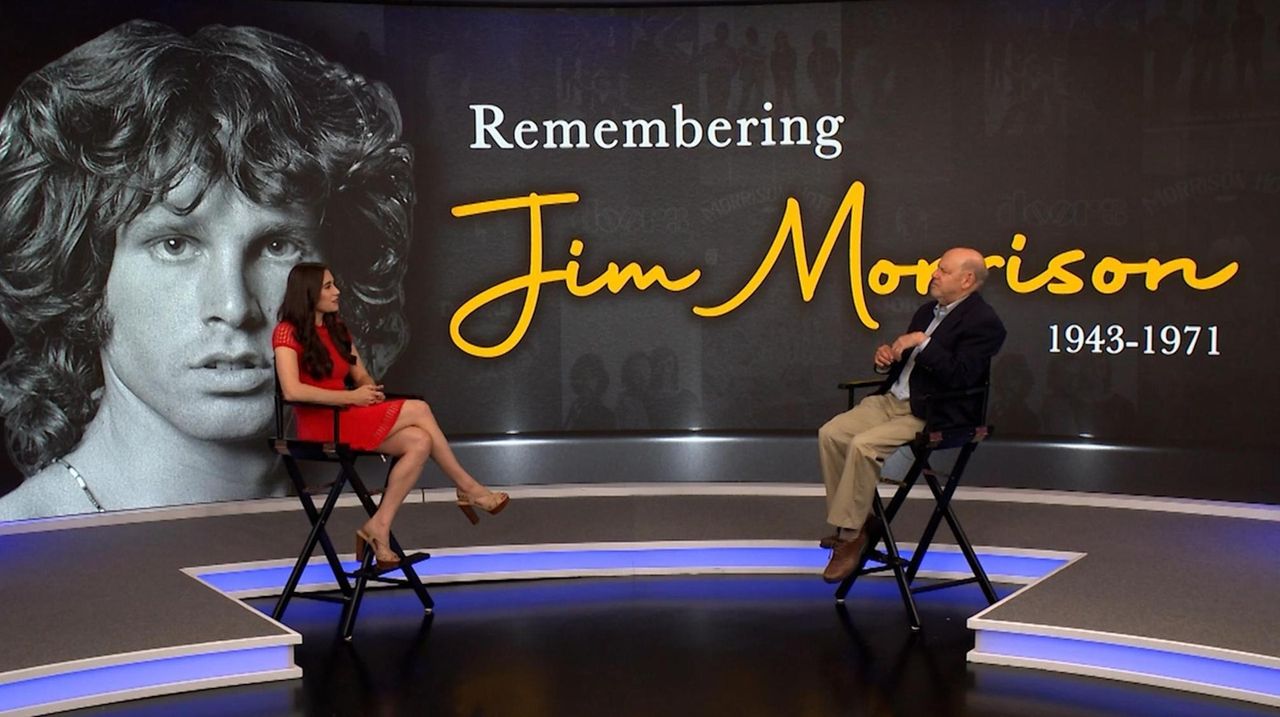 Jim Morrison of The Doors died 50 years ago at age 27. Newsday's Marissa Sarbak reports on why he still matters today. Credit: Newsday / Staff

Almost everyone finds Jim Morrison at some point in their life. Usually it comes about in your late teens deep into high school or when you first enter college. Even 50 years after his passing, The Doors' lead singer looms large in pop culture as a symbol of youthful rebellion.

"When you are young, you are always searching for something," says WBAB DJ Joe Rock, 55, of Setauket. "If you are lost, you have to hear about Jim. He’s interesting and you'll want to find out more about him, which is how he keeps appealing to the youth."

Morrison proved to be an intriguing frontman who presented a combination of beauty and intelligence with a dramatic edge.

"Jim was a good-looking, charismatic guy who had this poetic vibe," says Ira Landgarten, 72, who grew up in East Meadow and saw The Doors perform at the Eastman Theatre in Rochester on March 16, 1968. "His voice was very seductive and there was a certain level of sophistication to his lyrics."

Tying in with the 50th anniversary of Morrison’s death is a new book called, "The Collected Works of Jim Morrison" (Harper Collins). The 584-page tome focuses on poetry, journals, transcripts and lyrics from the singer’s personal library.

"I think seeing his work will let fans view him in a broader way," says Morrison’s sister Anne Morrison Chewning, who wrote the prologue. "Jim was thinking about film, poetry and screenplays. These are things he wanted to do. I think it will intrigue fans to see bits and pieces of the lyrics that came out later and how he reworked things."

Growing up as the son of a Navy officer, Morrison moved around the country every few years and developed a strong appetite for literature.

"In high school he started to read everything including 'The Complete Works of Friedrich Nietzsche'," says Chewning. "Our mom would give him money to buy clothes and he would use it to get books."

Michael Pappaceno of Bay Shore was inspired to become an English teacher because of Morrison.

"Jim had a gift for words. That’s what initially attracted me," says Pappaceno, 55. "I started keeping journals as a teenager writing poetry. He got me into James Joyce’s ‘Ulysses’ and Aldous Huxley’s ‘The Doors of Perception.’ I became very literate."

Additionally, Pappaceno developed into a serious collector of Doors memorabilia. His extensive collection consists of a rare limited edition mono version of the 1971 album, "L.A. Woman" from Argentina, 32 copyrighted photos, a first edition poetry book by Morrison and even an original Mass card from a joint memorial service for Morrison and girlfriend Pamela Courson.

"I search the world for stuff. It’s a thrill," says Pappaceno. "If it’s out there, I gotta have it."

MORE BEHIND THE DOORS

When The Doors broke on the music scene in 1967, the band's second single, "Light My Fire" went to the top of the Billboard charts. Although the song was catchy, there was more musicianship behind just the playful melody.

"The Doors were different because Jim Morrison was a poet, Robby Krieger was a blues guitarist, John Densmore was a jazz drummer and Ray Manzarek played bass on keyboards with his left hand and (traditional) keyboards with his right," says Rock. "All these elements blended together came out different from the rest of rock. They opened the door to a more progressive style of music."

Morrison’s lyrics elevated the band’s songs to give them deeper meaning.

"The Doors' music, especially the earlier albums, was born from the questions of personal discovery, enlightenment and what it all means," says Dave Brock, lead singer of Doors cover band Wild Child, who is playing The Paramount in Huntington on Sept. 25. "These are things that every generation struggles to find out in their teens. The words do not preach but ask good questions. No conclusions but suggestions."

The band developed a strong reputation for not only turning out hit albums ("Strange Days," "The Soft Parade," "Morrison Hotel," "Waiting for the Sun") but also delivering electrifying live shows. Jeff Goldman of Oceanside and his friends caught The Doors when he was 16 during a matinee at Westbury Music Fair as part of the band’s afternoon-evening doubleheader at the venue on April 19, 1968.

"We were out of our minds in rapture," recalls Goldman, 69. "When they did ‘The Unknown Soldier’ — because it was a story of Vietnam and war — the drummer hit the snare during the climax and Jim Morrison fell to the ground like he had been shot. There was nobody like him."

Art-rock band Earth Opera opened the show and had to play an extended set because Morrison was late coming to the gig. The singer took full advantage of Westbury’s stage in the round and even ventured out into the crowd during an extended version of "Light My Fire" where he shined a flashlight on people.

Apparently the band filmed the shows as fans who attended the performances witnessed cameras in the first few rows. But, no live footage has been released from the vaults. However, black and white clips of the band arriving at Westbury in a limousine made it into the Doors short film documentary, "Feast of Friends."

The Doors performed at another Long Island location a year prior, at the Action House in Island Park, a rock club that would later become Speaks. The shows, on June 16 and 17, 1967, featured opening act the Side Kicks. The band also played a gig at Stony Brook University's gym on Sept. 23, 1967 (with Tim Buckley, father of singer Jeff Buckley, opening). The show's program presented an image of Morrison surrounded by the words: "Let each become all he is capable of being."

Recalling his Doors 1968 concert experience, Landgarten says, "There was an intimacy about the show that blended performance art, poetry, jazz and rock. They had a hypnotic control over the audience. It was a well-crafted show with no lights or fireworks just pure music."

Morrison’s dramatic stage persona became bigger than life. Even his look of a billowing white shirt, tight leather pants with a prominent beat buckle and a thick head of tousled hair developed into an iconic image of the late 1960s.

"To Jim it was all a Greek drama. He was trying to reach the whole audience and pull them in," says Chewning. "Some of his stuff forced the crowd to react. He always wanted people to be bigger and break out."

But his reputation of bad behavior preceded him. Morrison had been arrested multiple times for inciting a riot, indecency, public obscenity, public drunkenness, public profanity and indecent exposure. Morrison used alcohol to help cope with his fame but it caused tension in the band.

"He was great at first, one of the guys, but as time went on his drinking made it tough to hang with him," says Doors guitarist Robby Krieger in an interview via email.

Morrison was found dead on July 3, 1971 in a bathtub by Courson at age 27 in Paris, France. The cause of his death remains a mystery but was suspected to be heart attack due to drug use. However, no autopsy was performed therefore the official determination remains cloudy.

"It was a surprise that it didn’t happen earlier," admits Krieger, 75.

With his passing, Morrison joined the infamous "27 Club" — a long growing list of musicians who died at age 27 including Brian Jones of the Rolling Stones, Jimi Hendrix, Janis Joplin, Kurt Cobain and others. He was laid to rest at Père-Lachaise Cemetery in Paris, France. To this day his grave site remains a major tourist attraction.

"The site is very spiritual in a way. There are messages from all over the world. Every day there’s always fresh flowers and candles," says Rock, who visited in the grave in September 2019. "There’s so much that surrounds it that still gets people’s attention like, is Jim really there? Did he really die? This guy has been gone all this time but he still has this major impact."

When asked if The Doors would have continued had Morrison lived, Krieger says, "We would have for sure. Before he died he called us at The Doors office and seemed like he was ready to come back …. never had a writing partner like him."

WHEN THE DOORS OPENED FOR SIMON & GARFUNKEL

On August 12, 1967, Simon & Garfunkel headlined Forest Hills Tennis Stadium. This was a big homecoming for the folk duo from Queens except one thing stood out — the support act. A young band by the name of The Doors opened the show with an unpredictable lead singer named Jim Morrison.

“It was the most incongruous double bill I’ve ever seen,” says Paige Miller, 72, who grew up in Huntington and had attended the show. “Jim Morrison was something to behold and the most sexual performer I had ever seen, quite raunchy. He broke all the rules with pleasure.”

The band started late because they had lost equipment on the flight over and had to borrow some to go on stage. But there also seemed to be tension with the audience.

“Morrison didn’t appear to have any respect for the crowd. He didn’t connect with them,” recalls Dr. Harry “Biff” Gould III, 74, who was also raised in Huntington and saw the concert with Miller, now his wife. “The music was too lengthy. ‘Light My Fire’ was 15 minutes long. I think they only played four songs but it took about an hour.”

However, looking back Dr. Gould says he is glad he saw the show.

“When I listen to Morrison’s voice now, I realize just how good he was,” says Gould. “I’m disappointed in him though. I think he could have done a whole a lot more than he had. I hope people look at him and realize this isn’t the way to rebel. There are other ways without doing yourself in.” — DAVID J. CRIBLEZ