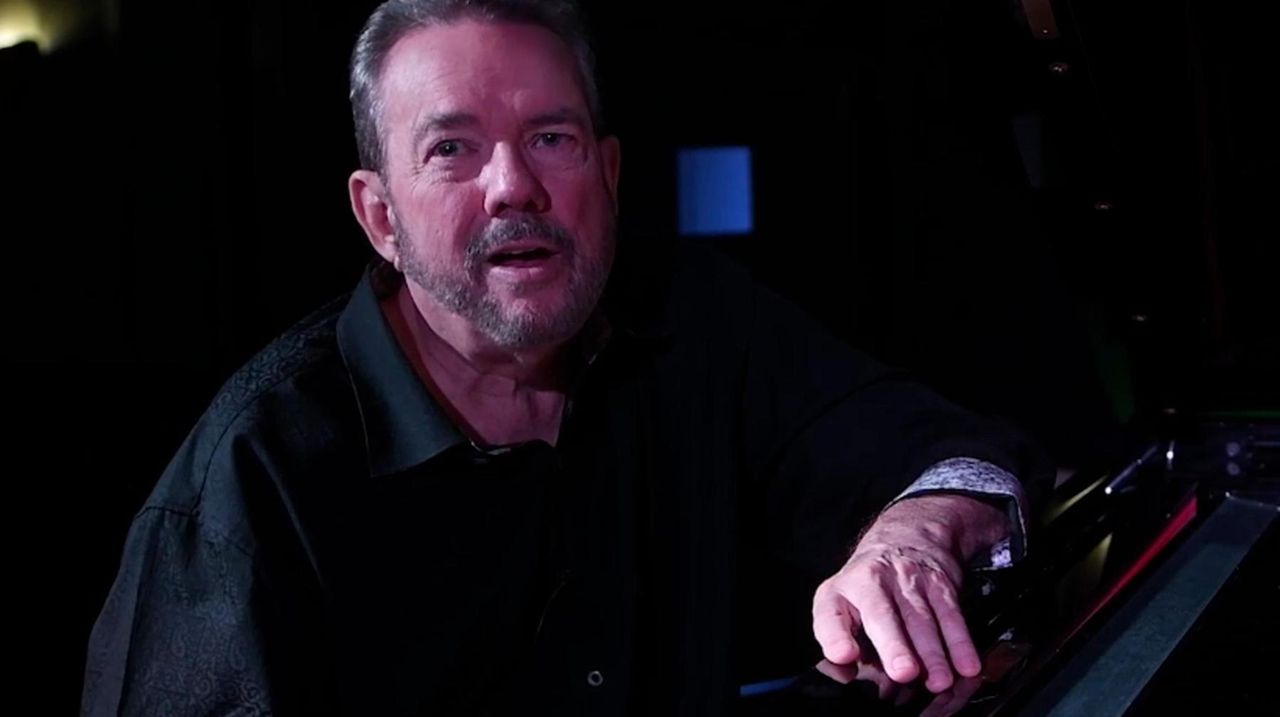 On Wednesday, Grammy-winning singer-songwriter Jimmy Webb, whose hits include "MacArthur Park," "Up, Up and Away" and "Worst That Could Happen," talked about his upcoming performance at My Father's Place in Roslyn on Sunday. The Long Islander also discussed being inducted into the Long Island Music Hall of Fame in November. Credit: Newsday / Alejandra Villa

The singer-songwriter — best known for writing classics “MacArthur Park,” “Up, Up and Away” and a string of hits for Glen Campbell, including “By the Time I Get to Phoenix” and “Wichita Lineman” — has been touring off and on throughout the year across the United States and in Australia and the United Kingdom.

“It’s been a nice run,” says Webb, calling from Ojai, California, between meetings of ASCAP, the songwriter and music publisher association where he is on the board of directors. “But I’m ready to go home and play with my cat, drive around Bayville, and look at the seagulls and the ospreys and go for walks on the beach — a few days of that.”

Though Webb, 72, proudly hails from Oklahoma and is best known for his time in Los Angeles as a songwriter in the ’70s, he has lived in Bayville for the past 14 years and says he is looking forward to playing My Father’s Place at The Roslyn Hotel on Sunday to “further embed myself into the Long Island zeitgeist.” “It’s an honor,” he says. “It was an iconic venue and the list of alumni who played there is like a who’s who of rock and roll and pop music.”

And Webb returns to Bayville with a new honor. On Nov. 8, he will be inducted into the Long Island Music Hall of Fame. “That is just totally unexpected,” he says. “I have attended a couple of the ceremonies and I was there to induct Johnny Maestro and the Brooklyn Bridge [Webb wrote their 1968 hit “Worst That Could Happen”], so I’ve been around the proceedings. But I never foresaw being inducted myself.”

The honor is simply the latest in a long line of career surprises Webb could not have predicted. Like publishing a well-received memoir, “The Cake and the Rain,” last year. Like writing a classical music piece, “Nocturne for Lefty,” which debuted in 2016. Or hearing Rihanna sing his “Do What You Gotta Do” as part of Kanye West’s hit “Famous.”

But maybe the most unexpected twist to Webb’s career is also the most complicated. Following the death of his friend and collaborator Campbell last year, after a long, public battle with Alzheimer’s disease, Webb now finds himself performing more of Campbell’s music than ever before, even songs that Webb didn’t write for him.

“It’s tinged with a kind of bittersweet joy,” says Webb, who says the loss of Campbell is still too painful for him to discuss. “I love doing his music because it keeps Glen’s spirit alive. And not to sound too weird about it, I feel Glen around during those performances. I have to ride herd on my emotions when I’m singing because it’s just over a year since we lost him and the sense of loss is still very acute and it’s very fresh. I can see his face and hear his voice, when I’m doing my lame attempts of doing ‘Wichita Lineman.’ But all in all, it’s a positive experience.”

Webb says he feels the need to perform more now because it’s about more than just him.

“As long as I’m alive he’ll never be forgotten,” says Webb, who has been performing some shows with Campbell’s daughter, Ashley. “I will always play Glen Campbell music. I will keep that candle lit. We lost a tremendous talent. And we only scratched the surface of what he was capable of achieving. . . . I believe in the Greek idea that as long as someone is saying your name, you remain alive. I am keeping his legacy alive. But I also perform because it keeps me alive.”

Webb says touring is tough, but the performances make it worthwhile. “Sometimes the traveling is almost unbearable,” he says. “But that work is still healthy in the long run. I’m going to keep doing it til I can’t physically do it any more.”

And Webb says he enjoys performing with newer artists. “At the CMAs, I performed with Little Big Town and we just did this transcendent version of ‘Wichita Lineman,’ which they’ve been doing all summer on their tour. . . . It keeps me young to be around this new generation. I learn things about what’s going on. It’s a conduit to the real world.”

And Webb says he has plenty of projects that he still wants to finish, including a sequel to his memoir and several more albums.

In addition to a new solo album of originals due next year, Jimmy Webb is also working on a series of albums filled with instrumental interpretations of his favorite songs.

“They don’t pay me as much when I sing,” jokes Webb, adding, “I absolutely love to play the piano, unfettered by any lyrics.”

The first installment of his “Slipcover” albums will be an eclectic collection of his favorite rock songs, including Warren Zevon’s “Accidentally a Martyr,” Randy Newman’s “Texas Girl at the Funeral of Her Father,” Joni Mitchell’s “A Case of You” and Billy Joel’s “Lullabye (Goodnight, My Angel).”

“It’s going to be very emotional,” he says. “It’s going to be music that’s really almost in my DNA. I really want to do the best possible job I can for these guys I’ve regarded as friends and who I think are the great composers of our generation.”

Webb says he has plans for several other albums in this series, including an album-length tribute to country-music pianist Floyd Cramer and “Hymnology,” his favorite songs from growing up in the Baptist church.

“We’ll see how they go,” Webb says. “There seems to be a voracious appetite for piano music out there right now.” — GLENN GAMBOA

Notable inductees in the LI Music Hall of FameBilly Joel and Mariah Carey are givens, but do you know who else has earned a place in the Long Island Music Hall of Fame? Here are 35 big names inducted since the first biennial ceremony was held in 2006. This year's gala is set for Nov. 8 at The Space at Westbury. See more than 100 notable Long IslandersProminent people who have called Long Island home.