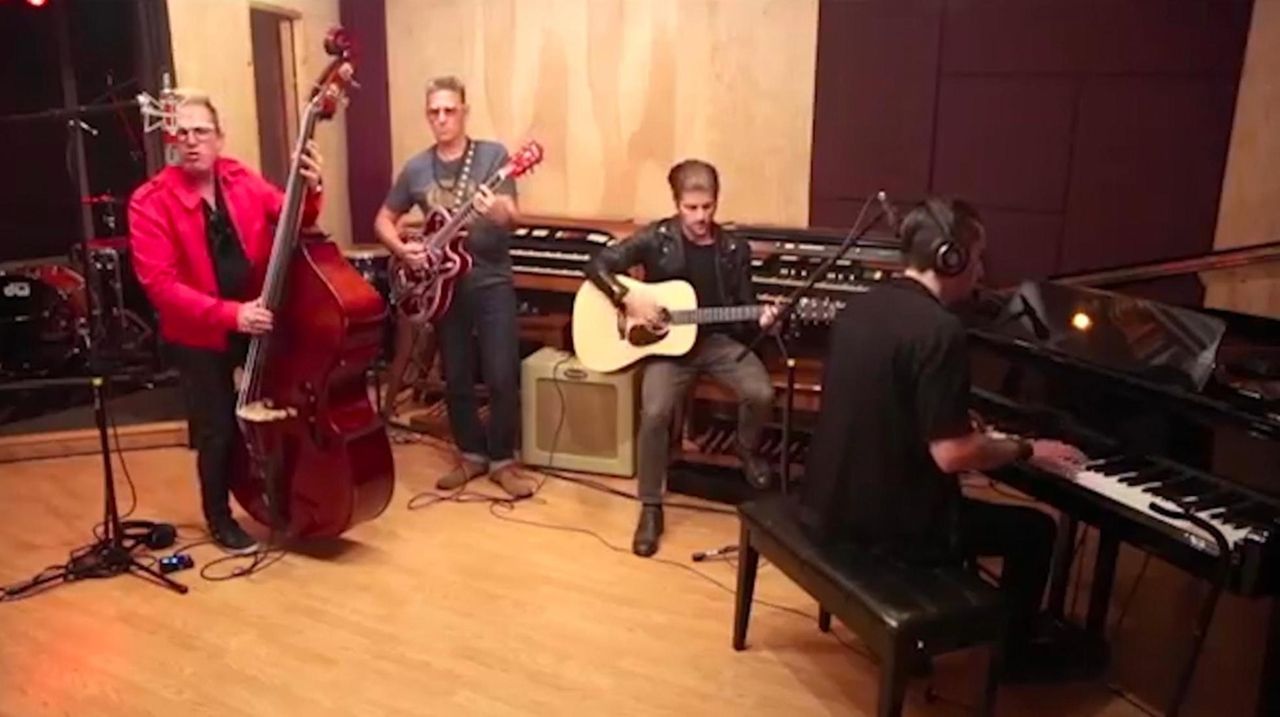 Rockabilly bassist Lee Rocker had no choice but to be a musician because it’s in his blood. Growing up in Massapequa, his father Stanley Drucker was principal clarinetist for the New York Philharmonic and his mother Naomi was a music professor at Hofstra University. "The rule we had growing up is you had to play an instrument," says Rocker, 59.

By age 18, Rocker formed a ‘50s style rockabilly revival trio with his Long Island buddies vocalist/guitarist Brian Setzer and drummer Slim Jim Phantom called the Stray Cats in 1979. The group went from a bar band to one of the hottest live acts in the world by 1982 selling millions of albums and appearing all over MTV with hits like "Rock This Town," "Stray Cat Strut" and "(She’s) Sexy + 17."

Through the years, Rocker played in yet another successful trio Phantom, Rocker & Slick and even maintained a solo career. Meanwhile he still performed and recorded with the Stray Cats, which celebrated its 40th anniversary with a new album and tour in 2019.

Newsday’s David J. Criblez recently spoke with Rocker about the origin of his new solo album, "Gather Round," reuniting with his old band and his plans to get back on the stage this year.

What sparked the inspiration for the new album?

This past year was very introspective in a way as we were all in lockdown with our loved ones so I started to write. My wife and I got in our Airstream and drove from Southern California across the country to New York, where I live part of the year. I stayed in New York for a while and even got to visit my folks in Massapequa. It felt great to come back to Long Island, hit up All-American and Krisch’s ice cream parlor. Then we drove back to California. This whole album was a product of this time. I saw some truly amazing sights on that trip — the good, the bad and the ugly. When I got back after being gone for five weeks, I went into the recording studio with my engineer Mike Troolines and put the songs together piece-by-piece.

You have a song on the new album called "Graceland Auction." What did Elvis Presley mean to you growing up?

I love Elvis. As a kid I’d see pictures of him in the newspaper, watch him in the movies and hear him on the radio. I thought he was so cool. He was almost like a living superhero. As a teenager, I closely paid attention to his music and it just sucked me in.

The title track, "Gather Round" sounds like a party. Was that the intent?

That song surprised me how joyful it came out. It’s an expression of optimism and forgetting about what’s going on outside. This is a happy, fun record with a few moments of seriousness. I want to put a smile on people’s face. It’s got a lot of energy mixed with cool, fun rock and roll.

In 2019, you reunited with the Stray Cats. What was the vibe like in the band?

The vibe was great. I’m so glad we got to do that album ["40"] and tour. We’ve been doing the Stray Cats sporadically now for 40 years. These are guys I grew up with and we went to school together. We know each other in every way. Once we hit the stage, it’s really comfortable because we become one unit.

How would you characterize the energy in the Stray Cats?

It’s a serious intensity when the three of us get together and play. It’s very free … like the three of us are having a conversation with each other. There’s not a lot of bands like that. We are a live band, that’s our biggest strength. Our specialty is tearing the house down. What sets us apart is we are a three-ring circus. We always set up the three of us across the stage. Some nights I’ll be bleeding from my fingertips because I dig in really hard. A Stray Cats concert is a muscular workout for me.

Will the Stray Cats do more in the future?

I don’t know but I wouldn’t close the book on it.

What drew you to play the stand-up bass instead of the electric bass?

At age 7, I started playing cello then at age 13 I started getting into blues and rockabilly. The records I loved didn’t have electric bass, but rather that thunderous upright slap bass. It’s the motor that drives this music. It was an easy transition from the cello. The upright bass is special. It feels like an extension of me. There’s a physical presence to it as you are standing next to an instrument that is bigger or the same size as you. For me, it just clicked.

When do you foresee getting back to playing live?

My solo band and I are booking concerts for the last half of this year so we can get back to doing what we do in August-September. I can’t wait to get on stage again. This is the longest I’ve gone without playing live on stage since I’m 13 years-old. I’m sure it’s going to be an emotional moment. I’ll have to take a deep breath.