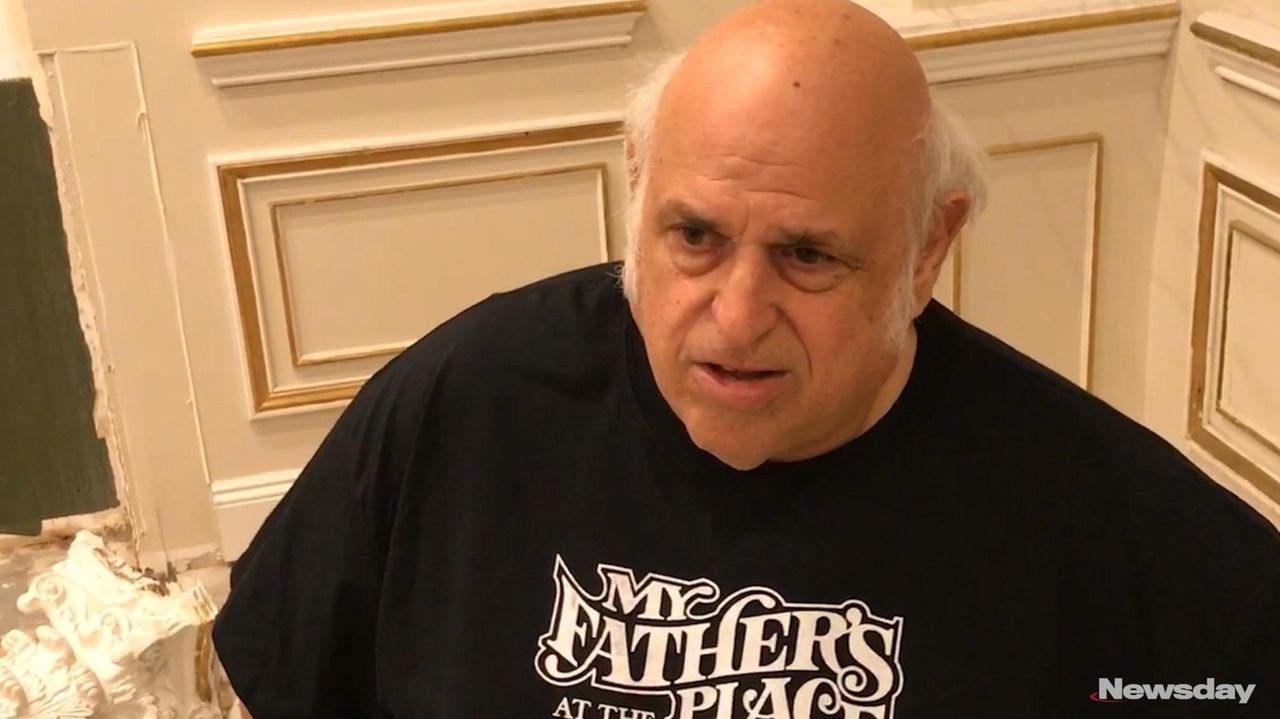 Michael "Eppy" Epstein, co-founder of My Father's Place, talks about tribute bands in the middle of construction at the new My Father's Place at The Roslyn Hotel on April 16. Credit: Newsday / Glenn Gamboa

It wasn’t that long ago that Taking Back Sunday and Brand New led a thriving Long Island music scene that drew all sorts of record labels to Farmingdale and Amityville to sign new acts to deals. But, in recent years, musicians are fleeing the area for Brooklyn or Nashville or Los Angeles because fewer and fewer places here will regularly host local bands playing original music, while the market for tribute bands is booming.

“That’s why we had to move here,” says Faber, sitting in the Manhattan office of his record label.

“We wanted no part of that,” adds Sunflower Bean’s guitarist Nick Kivlen, who still lives in Glenwood Landing when he’s not on tour. The band’s strategy turned out to be right, as their “Twentytwo in Blue” album hit the United Kingdom’s Top 40 and drew rave reviews. Though Sunflower Bean, like Hicksville’s Lemon Twigs, are among a handful of Long Island artists landing record deals recently, they have played more shows in England than they have on Long Island, more shows in Switzerland than in Suffolk County.

Why tribute bands are booming on Long Island

“The old Long Island scene doesn’t seem to exist anymore, in terms of the people coming out to shows,” says Taking Back Sunday guitarist John Nolan. “The old venues aren’t there. It’s kind of a different thing now.”

Even the underground circuit — the VFW halls and restaurant basements — that pushed Taking Back Sunday into the international spotlight, landing them a string of Top 3 albums and rock hits, is also diminished.

And some think all of this is directly tied to the rise of tribute bands.

When James Skidmore, president of the Greater Patchogue Chamber of Commerce, held a meeting of musicians for an upcoming CD project of local music that he hopes to give away to area visitors, he never dreamed it would turn into an argument. But it did.

Original music bands complained that the popularity of tribute bands was making it harder for them to find paying gigs. Tribute bands argued that they should be considered for inclusion on area CDs or for concert series like anyone else.

“There was plenty of tension,” Skidmore says. “It was a difference of opinion on what music should be considered.”

The argument got the attention of Jim Faith, who produces Long Island’s biggest music festival, the Great South Bay Music Festival in Patchogue, and other events each year. Though that festival is overwhelmingly filled with original bands — including this year’s headliners such as The Dickey Betts Band, Umphrey’s McGee, Sublime With Rome, The Front Bottoms and Long Island bands like Envy on the Coast — Faith plans to add a handful of tribute bands this year because he knows they will draw a crowd.

He says he believes there is a middle ground that promoters and musicians can find to support both the fans and the scene. Faith has organized a panel discussion — The State of the Long Island Music Scene or “Tribute Bands Are Taking All Our Gigs” — at The Space at Westbury on May 24 to look for those solutions.

However, Michael “Eppy” Epstein, who co-founded the legendary My Father’s Place in Roslyn, doesn’t think there should be compromise. He didn’t allow bands booked at the club, which helped launch the careers of Bruce Springsteen, Bob Marley, the Ramones and U2 in the '70s and '80s, to play any covers. (He made an exception for Prince, who rented the club. But even then, Epstein only allowed Prince to play two covers in his set.) That policy will not change when My Father’s Place at The Roslyn Hotel opens in June.

“There will not be any cover bands at night,” says Epstein, though there may be the occasional “Beatles Brunch” or other tributes for weekend lunch crowds. “I think it’s perverted. I think it’s a marketing perversion. As long as more and more venues and promoters are using these tribute bands and cover bands, they are not focusing on the work at hand, which is to develop new music.”

Epstein argues that even though tribute bands may bring people in now, it harms the business in the future. “How are you going to become a fan of something new if there isn’t anything?” he says. “We’re going to end up singing campfire songs again.”

“If you push out the artists and you don’t care about what they need or how to help them, your city is not going to be the mecca for creative arts that it once was,” she says. “That’s why everyone is moving to L.A.”