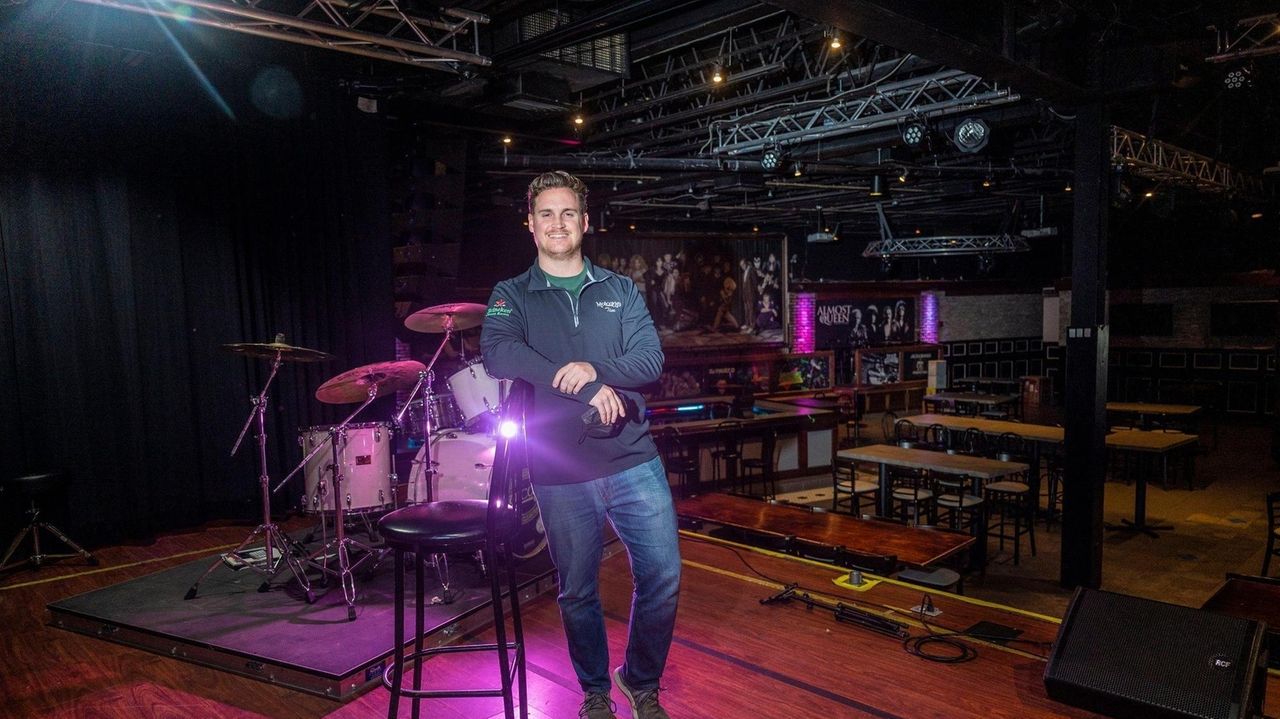 After the most recent reopening guidelines by Gov. Andrew M. Cuomo, music venues like Mulcahy's Pub & Concert Hall, in Wantagh, are hopeful that things will be getting back to normal soon. Mulcahy's director of promotions, Tim Murray, feels the venue is on "on track to reopen" by mid-summer. Credit: Newsday / Alejandra Villa Loarca

Gov. Andrew M. Cuomo went into great detail about reopening Broadway theaters and ballparks at his news conference this week, but Long Island music venue owners say they are confused about where they stand.

"Everything is so vague," says Kevin Sheehan, owner of KJ Farrell’s in Bellmore, The Warehouse in Amityville and Prohibition in Massapequa Park. "What you can do and what you can’t do changes every day."

Cuomo on Wednesday addressed separating vaccinated and non-vaccinated people at Yankees and Mets games. However, music venue owners don’t know what their directive is from the governor.

Joe Fortuna, co-owner of The Nutty Irishman and 317 Main Street in Farmingdale, adds: "Do we ID people for the vaccination card or for a negative test? I have no idea. That would be a nightmare."

Occupancy rising to 33% as of May 19 may not help these venues.

But it’s not only music venue owners who are frustrated. So are patrons.

"We have to continuously ask them to sit down," Sheehan said. "Half of them don’t believe this is real and don’t believe we should be wearing masks and the other half is kind of tired of the whole thing."

In fact, Fortuna has hired security just to police the crowd to maintain COVID-19 restrictions.

"Some people will get up and dance, but we have security to monitor that because we still get weekly checks from the SLA [State Liquor Authority]," Fortuna said. "People get frustrated and they are like, ‘Don’t tell me what to do.’ They have to understand I’m not telling them what to do, but I’m also not risking my license because they want to dance. I feel bad. Do you think I want to tell people not to have a good time? I’m in the entertainment business. People pay me to have a good time."

Business for the local venues has been down for more than a year. The Nutty Irishman has lost about 75% of its revenue due to the pandemic and 89 North Music Venue in Patchogue hasn’t been open since March 14, 2020.

"We are stretched very thin for money. We are depending on the SVOG [Shuttered Venue Operators Grant]," said Dan Welsch, owner of 89 North Music Venue. "You can’t just throw the doors open. There’s a lot of expense firing the place back up."

Murray adds, "The grant applications didn’t come around until April 8th, then the website crashed and it didn’t reopen until April 26th. They are saying the end of May for the money to arrive. It’s been a very long journey."

But the summer season traditionally tends to be slow for indoor live music venues on Long Island.

"Everybody is outside," Welsch said. "Our busy season is October 1st to May 1st."

Additionally, booking national acts is a problem without occupancy being at 100%.

"Other states like Florida are at 100% and the national acts are not going to come to New York if they can just play down there," Murray said. "It’s impossible to book them if we’re not open at 100%."

Many say they feel the time has come to fully open and move forward.

"I think all the restrictions are going to have to come off soon," Welsch said. "You can’t pack people into a club and tell them they can’t dance and they have to stay 6 feet apart. That doesn’t work."