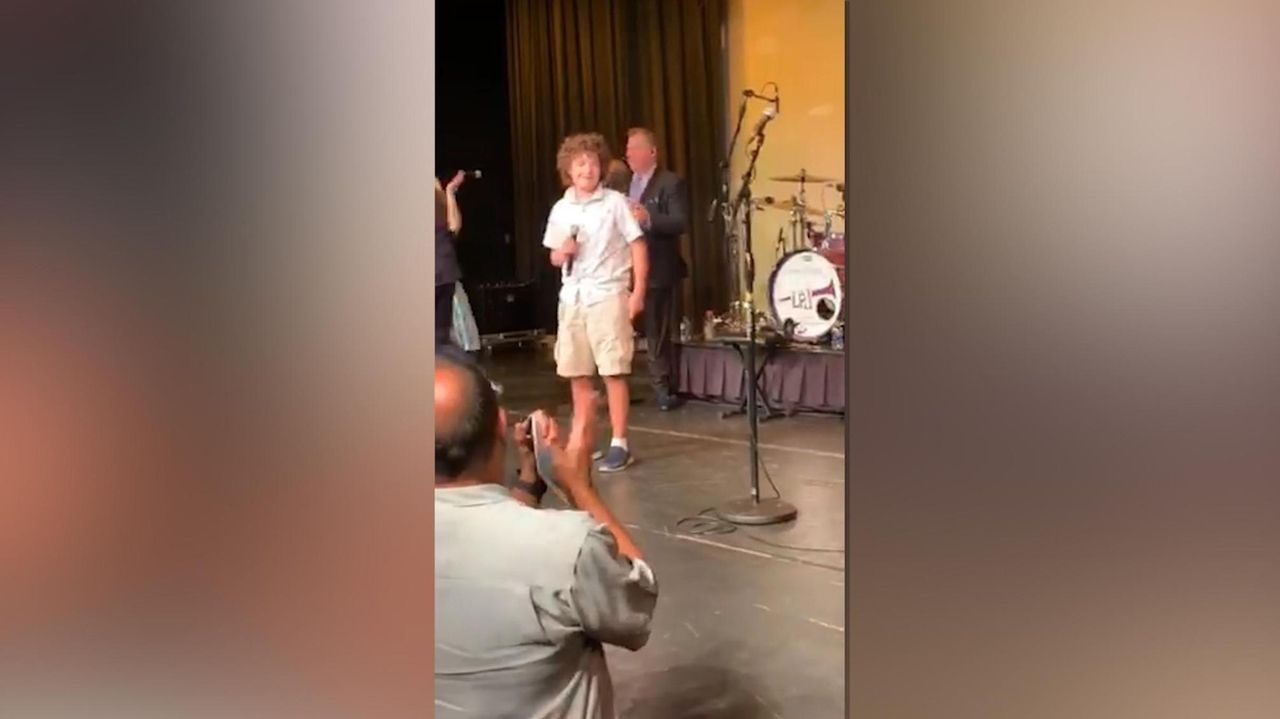 Glen Cove's Michael Renga, a frequent musical-theater performer on Long Island, was called up impromptu by Prima Jr., son of the late swing-band legend Louis Prima, after the bandleader saw a video of the boy sent to him by mom Denise Renga.

"My child is stuck in, like, 1953," she said cheerfully. "Everything is about Frank Sinatra, Sammy Davis Jr., Deano [Dean Martin], the whole Rat Pack. But Louis Prima is his hero," and Michael had sung his "Buona Sera" at the fifth-grade concert at Connolly Elementary School in May.

Prima Jr. responded admiringly about the young singer, who moves on to Finley Middle School this fall. "We kept in contact over the last few months," said Denise Renga, 48, a saleswoman at Rallye Lexus in Glen Cove. When Prima Jr. informed her he would be playing the Boulton Center, she knew Michael would love to attend. "My son was the youngest person there by about 50 years!" she quipped.

A few songs into the show, she recalled, Prima Jr. began relating anecdotes to the audience. "And then he says, 'I received an email from a lovely lady about her 11-year-old son.' I'm dying, Michael's dying, my in-laws, we had no idea. He asked Michael to come up onstage."

"When he said come on up I was slightly doubtful," Michael Renga said. "I thought he was inviting me up to wave to everybody. Then he whispered to me 'Pennies from Heaven,' " the 1936 standard covered by Louis Prima in 1957. "I just said, 'Let's do this' and went right into it."

Renga was not nervous, he said. "I knew exactly what to do. I know the song exactly like the back of my hand. I knew every word, I knew when to come in. I've sung Louis Prima songs before, and my key is pretty similar to his. I feel like a piece of Louis Prima lives inside me."

A video supplied to Newsday by his mother shows the young singer belting an up-tempo version of the tune with complete confidence, even exchanging bebop scat with a saxophonist and dancing along to the band. The audience gives him a standing ovation.

Though he has performed with groups including Jazz Hands Children's Theatre of Glenwood Landing, and had a recent gig with a jazz ensemble at the Glen Cove restaurant La Bussola, the youngster has set his sights on a career as an astrophysicist. He spent a week studying genetics at the DNA Learning Center camp in Cold Spring Harbor this summer, and parents Denise and Michael, 43, a history teacher at Carle Place High School, took him to tour the Massachusetts Institute of Technology's Department of Earth, Atmospheric and Planetary Sciences.

Still, the young singer averred, "I couldn't believe what was going on" as he sang with Prima Jr.'s band. "It was a magical night."

'Gunpowder Milkshake': Flawed, but fun action movie
7:31
'The Buzz': Victoria Konefal talks about 'Days of Our Lives'
Robin Roberts: 'Jeopardy!' stressful but wonderful
How 'Ted Lasso' captured the attention of soccer players around the world
LI 'Survivor' champ to compete in MTV's newest 'Challenge'
Here's when 19 of your favorite TV shows will be returning
Didn’t find what you were looking for?