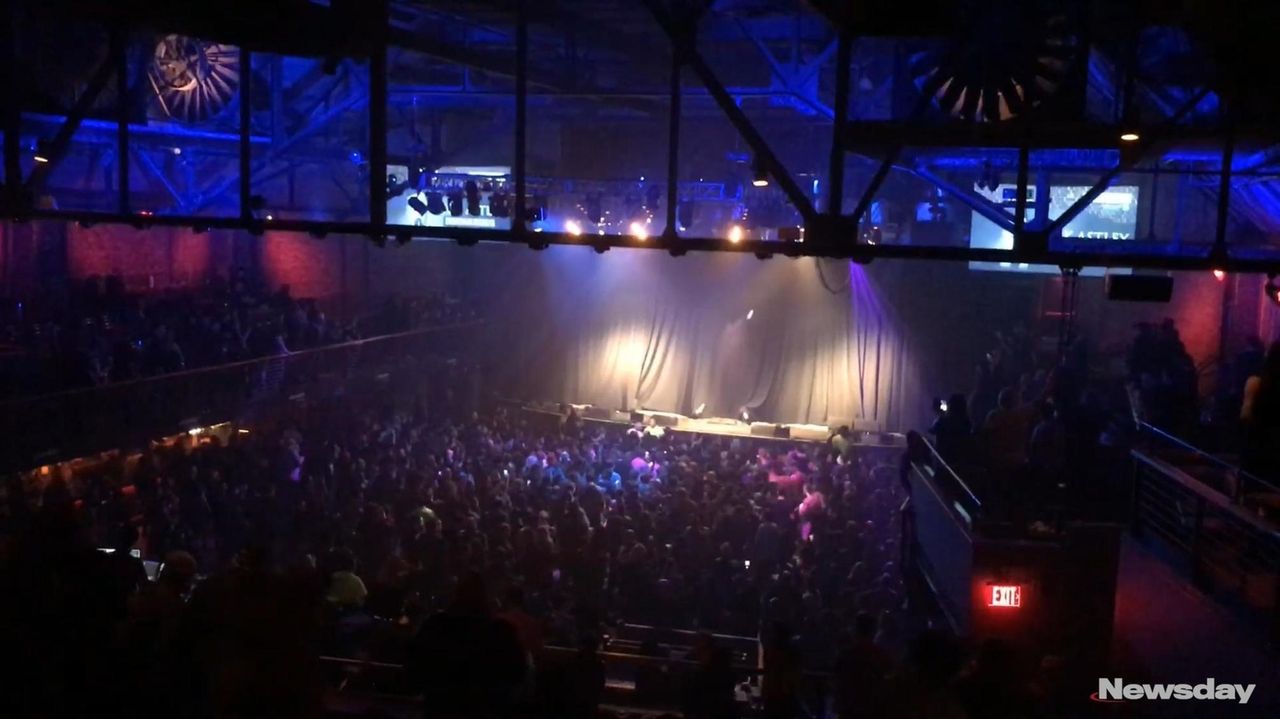 The crowd at the Marilyn Manson concert at The Paramount in Huntington grew angry in response to the musician's performance on Feb. 15, 2018. Credit: Newsday / David J. Criblez

Marilyn Manson is currently touring to support his latest album, “Heaven Upside Down,” but Thursday night he turned The Paramount in Huntington ugly when he delivered a short, lackluster show causing fans to lash out.

“I want a refund! It was horrible,” said Trisha Bernardo, 32, of Levittown, as she exited. “He couldn’t even talk.”

Manson, 49, whose real name is Brian Warner, was originally supposed to play The Paramount on Oct. 3, 2017, but postponed the show to Feb. 15 after he broke his right leg in two places. The accident took place on Sept. 30, 2017, at Hammerstein Ballroom when a set piece of two oversized guns fell on him.

When he appeared at The Paramount, Manson emerged in a cast and sang from a wheelchair ushered in by men in scrubs, making his medical issue part of the act. While he quickly dispensed of the wheelchair, the cast remained, causing him to lumber about the stage.

Manson performed “The Reflecting God,” “Deep Six” and “This is the New [expletive]” — then things began to go south. He started chastising the crowd to show him more love if they wanted to hear more songs.

“Maybe he needed some hugs or TLC, but this is New York and he’s not going to get that here,” said Claudio Alvarez, 36, of West Babylon. “He’s a professional who has got to do what he’s got to do. I love the guy, but this was too much.”

Even the band seemed confused by Manson’s actions as several songs were started and stopped. Manson had his back to the crowd for most of the set and became indifferent. At one point he got frustrated and disappeared from the stage.

“He was too messed up and couldn’t perform,” said Victoria Kaufmann, 21, of Farmingdale. “It was disappointing.”

The crowd started getting rowdy by booing, tossing plastic cups and yelling out angry phrases. Manson came back and started to mindlessly jam on guitar along with the band for a long stretch of time almost to aggravate his fans then abruptly left for good after a little over an hour on stage causing the crowd to chant, “REFUND! REFUND! REFUND!”

“You can’t even call this a show,” says Sean Walz, 28, of West Babylon as he left the venue. “I’ve been a fan since I was 5 years old. I grew up listening to him, but he’s dead to me at this point.”

A spokesman for the Paramount declined comment. Manson’s representative had not responded to Newsday’s request for comment as of Friday afternoon.

20 songs that name-drop Long IslandFrom Lana Del Rey's "National Anthem" to LL Cool J's "After School," here's a list of songs that give a shoutout to Long Island.