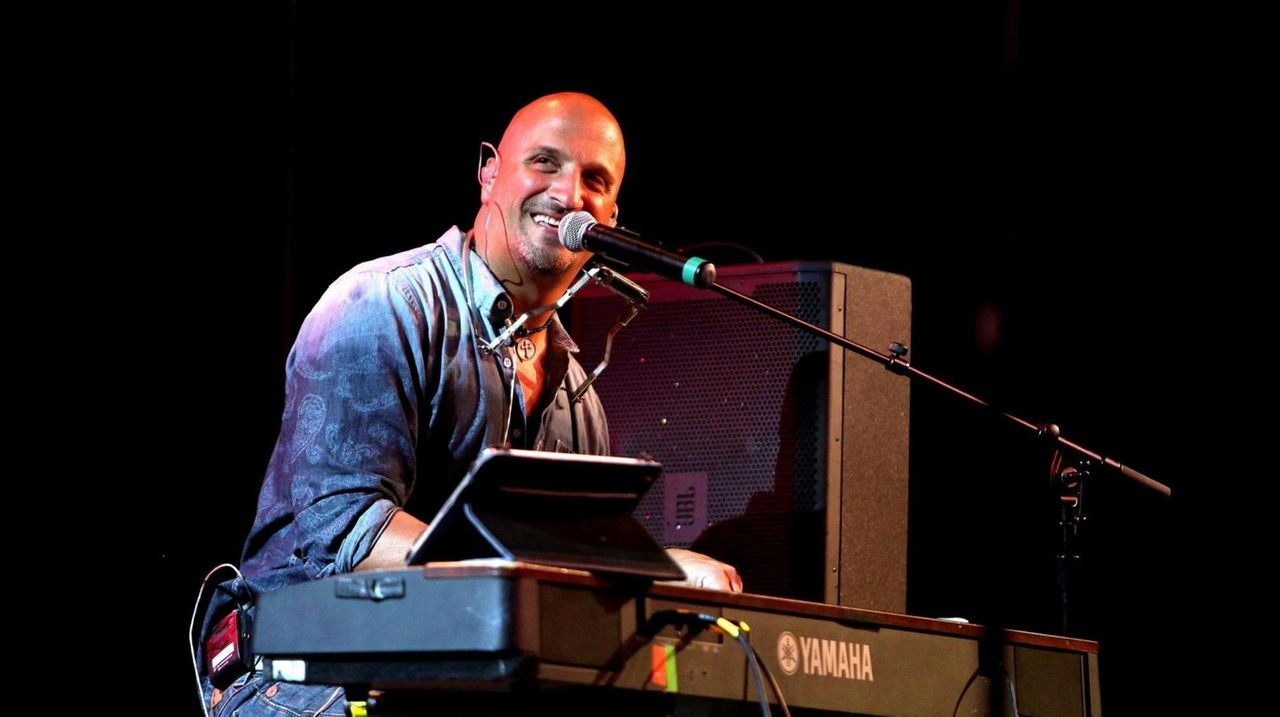 Michael DelGuidice, formerly of Miller Place, discusses the impact of his bi-weekly live streaming series, “Live on the Porch” in connecting with his fans. Credit: Newsday / David J. Criblez

Michael DelGuidice likes a challenge. After gaining success with his Billy Joel tribute band Big Shot followed by performing in the Piano Man’s actual live band, the Miller Place native is now singing behind the drum kit in his new music outfit, From the Cans Band.

"I’m not happy unless I’m pushing myself to get better in every possible way," says DelGuidice, 50. "How am I even supposed to breathe to sing a note when I’m already out of breath playing the drums? It’s the excitement of mastering that."

"It’s purely a classic rock show with me singing from the drums. Every song is an epic tune," says DelGuidice. "This opens up other avenues for different gigs. It will keep things interesting with a fresh new kick."

DelGuidice has been playing drums since age 8 and is happy to be returning to the instrument.

"The drums drive everything. It’s all about keeping time and having a good feel," he says. "Drumming is important to the core of who I am as a musician, it always has been. The internal clock that I’m creating on the drums comes out when I play my other instruments and accompany myself."

During quarantine, DelGuidice offered fans a biweekly livestreaming show on Facebook Live called "Live on the Porch," where he performs Wednesdays and Saturdays from his home when he’s not touring.

"It was just me going outside literally on the porch in front of the house with my dog and my guitar," he says. "It started as a way to really interact with fans to see the comments and talk to people directly."

His views grew into the thousands as people were craving live music during the pandemic shutdown. DelGuidice takes requests in the moment via posts that fans type in while performing on his acoustic guitar or piano.

"It seemed to be a reciprocal thing between myself and the fans. They really needed to hear music and feel connected while I needed to perform and have that feeling of an audience," he says. "I’m not scripted at all, which adds to the excitement because anything can happen."

Through "Live on the Porch," DelGuidice says he bonded with his audience in a way that’s more intimate than an average gig.

"When you are in a real room playing, you don’t hear the thoughts of the people in the crowd," he says. "Performing this way [livestreaming on Facebook], you know what they are asking, thinking and feeling every moment. You can really connect on a much deeper level."

Many of DelGuidice’s original songs became popular requests during his "Live on the Porch" shows such as "Mona Lisa" and "Where Do the Heroes Go?" He’s set to drop a new solo album, "Mask Production" later this year.

"I’d say 60-70% of the requests I get now are for original music. It’s made a huge difference for me," he says. "People have heard pretty much everything that’s going to be on the new album before it even comes out through ‘Live on the Porch’ and they are ready for it."

Meanwhile, Big Shot has gigs booked all summer long. But even that show is getting freshened up a bit.

Although he currently lives on the west coast of Florida, DelGuidice still considers Long Island his home.

"It’s bittersweet when I come back. I get to see friends I don’t regularly see anymore," he says. "It’s my roots and what I grew up with."

One venue that has been a mainstay on his performance roster for 26 years is Mulcahy’s Pub and Concert Hall in Wantagh where Big Shot will return to the stage June 12.

"Mike DelGuidice and Big Shot at Mulcahy’s has become a classic night on Long Island," says Tim Murray, Mulcahy’s director of promotions. "Mike is like family to us."

In 2010, the venue officially named its stage after DelGuidice.

"The stage dedication at Mulcahy’s was a beautiful gesture by a venue that’s been so important to my growth as a musician," says DelGuidice. "It was a true honor."

NOT YOUR AVERAGE JOEL

Michael DelGuidice grew up idolizing Billy Joel. Today he performs guitar and background vocals in his band and it’s not something he takes for granted.

“All the hopes you had as a child and everything you imagined your hero to be, Billy has been to me. He’s a true example of a person who puts others first,” says DelGuidice. “He took care of his whole crew and band throughout COVID. I don’t know many other artists that would do such a thing. He kept us alive. I’m forever indebted to him.”

Together on stage, DelGuidice’s background vocals get mixed with the Rock & Roll Hall of Famer recreating the double tracked vocals on Joel’s older albums.

“The vocal blending between us kind of came naturally. It’s just something that’s understood,” he says. “While most people are grabbing the harmony, a lot of times I am grabbing the melody.”

Joel even gave DelGuidice a spotlight moment in his show where the Piano Man surrenders the mic to DelGuidice who performs an Italian aria.

“Billy heard me do ‘Nessun Dorma’ on a video from my house on YouTube. Then in the middle of a show in Washington, D.C., he started playing it and looked over at me as if to say, ‘Well, go ahead — sing it.’ So I went for it,” says DelGuidice. “I got a horrible spasm in my stomach after the high note. But everybody seemed very happy with it. It has remained in the set ever since.” — DAVID J. CRIBLEZ

This summer Long Islanders will have multiple chances to see Michael DelGuidice perform live. Here are some of his upcoming local gigs:

Mike DelGuidice’s From The Cans Band