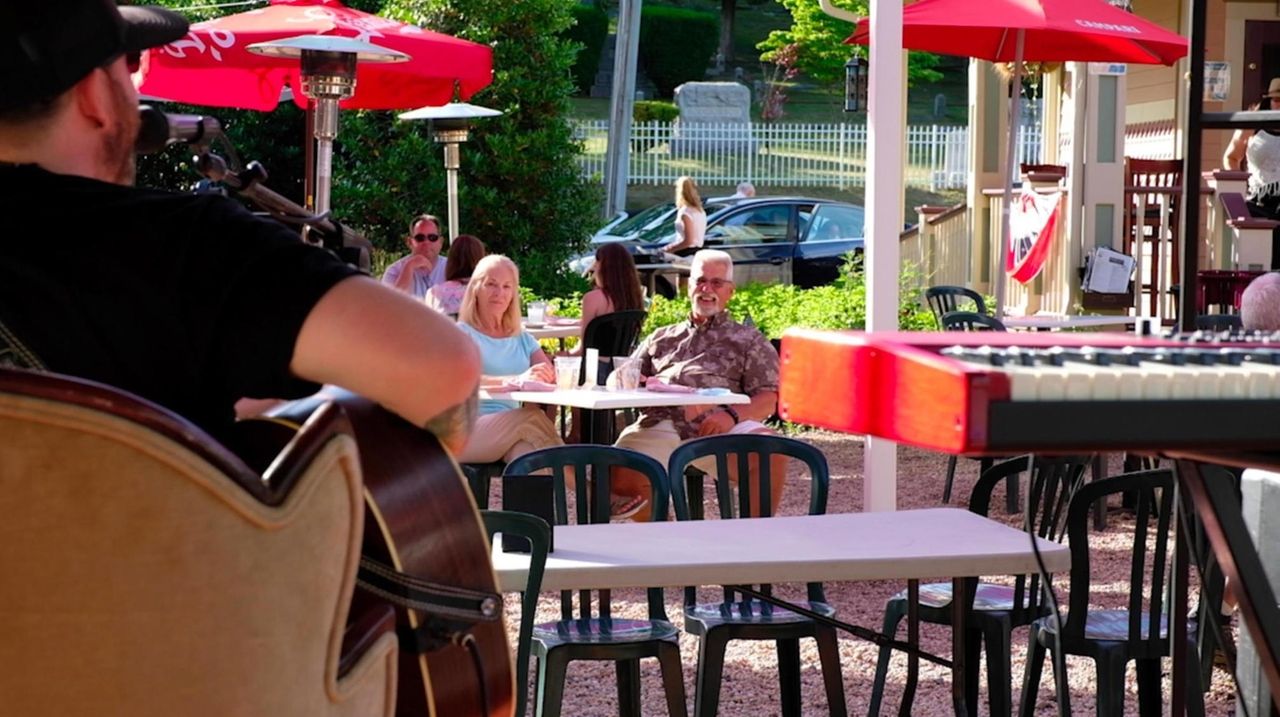 The Garden Grill in Smithtown was granted a permit by the Town of Smithtown to be able to expand to offer outdoor dining and music to their customers. Credit: Jeff Bachner

For those in need of live music, head outdoors where local restaurants and bars are providing fresh air entertainment due to the COVID-19 pandemic. Here are five places on Long Island that are kickin’ out the jams:

Feel like a burger, brew and some tunes? Live music happens out on the patio Wednesday-Saturday 6-9 p.m. and Sunday 5-8 p.m. on a first come, first served basis.

“We have people calling all day asking when the music starts,” says general manager Selina Piscitelli. “It draws people in and we’re known for it.”

Guests can choose from 11 styles of burgers and wash it down with a Five Points Rum Punch ($11) in a mason jar.

Singer/songwriter Nico Padden, who grew up in Farmingdale, recently played.

“The experience was a little surreal,” she says. “I haven’t played a gig in three months. It was a pleasure to perform for real live humans. My tip jar was absolutely stuffed at the end of the night, which felt good.”

“We redesigned the patio. Normally we can hold 60 but we reduced it to 30 for social distancing,” says bartender/manager Chad Smith, who also hosts artists on Sundays and Thursdays. “There’s even a bar window so people don’t have to come inside unless they are using the restroom in which case they have to wear a mask. We are doing everything we can to be as safe as possible.”

Enjoy seafood buckets of lobster ($29), snow crab legs ($29) or shrimp ($28) served with clams & mussels. You can even get them spiced up with chorizo, tomatoes and jalapeno.

Maria Rose of Merrick ventured on her first gig out of quarantine at Portside earlier this month.

“Playing outdoors you get more energy from the audience,” she says. “They are fully engaged in the music. It was one of the biggest crowds I’ve played for.”

There may not be music at the Paramount in Huntington but the venue’s art bar Spotlight next door is delivering live music along with gourmet burgers and craft cocktails at a dozen outdoor tables daily from 4-8 p.m.

“We restructured things when we heard outdoor dining is going to be big,” says manager James Visalli. “Times are changing so we are trying to be with it.”

Vocalist/guitarist Brian Ripps of Rockville Centre was the first to kick off Spotlight’s grand re-opening by mixing cover songs with his originals.

“Just to hear a round of applause is something I’ve been looking forward to for quite some time,” says Ripps.

Live music is what KJ Farrell’s in Bellmore is known for and their backyard patio, which holds 40-50 seats, has become a hotspot showcasing artists from Tuesday-Saturday from 7-10 p.m. (reservations are suggested).

“The first song we did was ‘Thank You’ by Led Zeppelin to show our appreciation to the crowd,” says singer/guitarist Kenny Forgione of Merrick. “It was the warmest reception we ever got. I got chills when they were clapping. I didn’t expect that.”

The patio at Garden Grill in Smithtown has been retooled holding 100 people socially distanced at over 6-feet apart with canopies for shade and even an outside bar. Music is offered Wednesday through Saturday from 5:30-9:30 p.m. and Sunday 1-8 p.m. in the fresh air.

“Our guests are loving the outdoors,” says co-owner Fred Marsilio. “The music is played at a volume where you can sit at a table and talk to the people you haven’t been with for awhile.”

Order snacks from the bar menu like flatbreads, prime rib paninis and fish & chips or full entrees such as filet mignon and mediteranean salmon served on china plates. Thursday night is Lobster Fest where full 1 ¼ lobsters come with an ear of corn for $22.

“Everybody seemed so happy to be out of the house, I know I was,” he says. “I can’t tell you how much this was needed.”