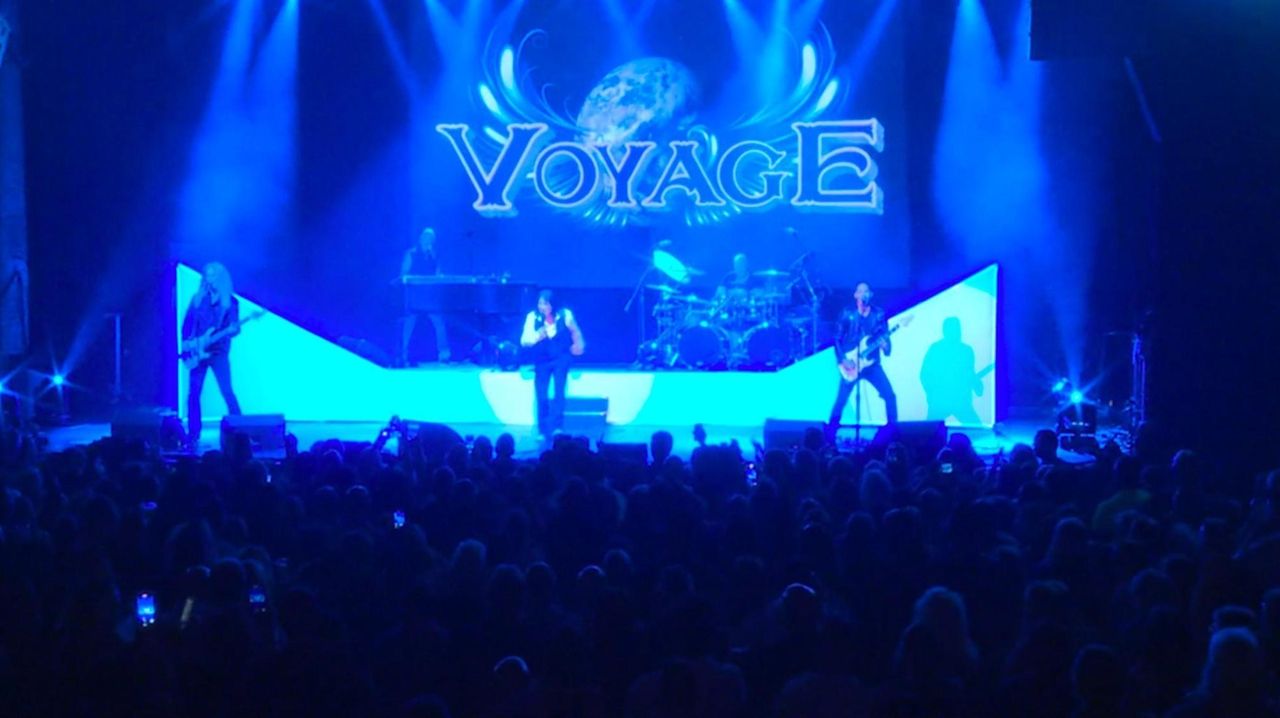 It’s 6:36 p.m. on a recent Friday night in Huntington and New York Avenue is bustling. Restaurants are packed and bars are overflowing all in anticipation for the event flashing on the marquee hanging above The Paramount. Tonight comedian Jim Breuer, who grew up in Valley Stream, takes the stage for the first time since February 2020 due to the pandemic.

"I had the greatest childhood ever growing up on Long Island," Breuer announces to the welcoming crowd. "My parents didn’t have any money. There were no vacations growing up blue collar. Vacation was your father taking out the sprinkler going, ‘You can play in this but not on the grass cause I just put seed down. Go on the cement!’ "

People are laughing in their seats and at the bar in what feels like a classic LI moment. This is the vibe that The Paramount has delivered for the past decade as the venue will celebrate its 10th anniversary on Tuesday when Joan Jett & The Blackhearts take the stage.

Before The Paramount opened in the fall of 2011, the venue was known as the IMAC — Inter-Media Arts Center, a 500-seat concert hall from 1983-2009 that featured such artists as Herbie Hancock, Philip Glass, Ani DiFranco, Richie Havens, Dr. John, Phoebe Snow and Keb’ Mo’. However, the building itself is more than a century old and served as both a vaudeville house and movie theater before IMAC's existence.

"When the IMAC first left, people were concerned as to what was going to go there," says Debby Wong of Huntington, who worked as a model in an IMAC fashion show. "It was the heart of Huntington back in the day."

"We saw that the IMAC closed so we came together as a team to put a plan together," says Ubertini. "It’s our town so we felt we almost had a duty to do something."

The foursome designed the kind of venue they wanted for Long Island concertgoers.

"The idea was to create this energy where you were part of the art whether you were seated, standing or in the back at the bar," says Ubertini. "You’re not a voyeur like at other stadiums, arenas or clubs. Here you are part of the action."

The seating was offered in a variety of ways allowing attendees to have their choice.

"You get every kind of concert experience you want," says Paul Sinclair, lead singer of Led Zeppelin tribute band Get the Led Out which returns on Dec. 9 and 10. "You can sit in the stadium seating in the back or be on the floor in the mix right in front of the band. You can choose to go VIP style on the side or just watch the show from the bar while having a drink. That’s what creates a sense of electricity and keeps people engaged, which makes the room come alive."

"The place has an aura about it," says actor Chazz Palminteri, who will bring his one-man show, "A Bronx Tale" to the venue for the 11th time on Nov. 14. "There’s not a bad seat in the house."

Many artists enjoy the way they could reach their fans at The Paramount because of the close proximity of the room.

"You can play big festivals, concert halls and arenas but sometimes you don’t feel as if you are connecting with everyone because they are so far away," says new wave pop star Howard Jones, who will play his sixth show at the venue on February 18. "At The Paramount you can look people right in the eyes and have that contact with them even though the venue holds a good amount of people."

In terms of booking the room, The Paramount didn’t want to be considered one-dimensional.

"We wanted to get the biggest acts of the industry as well as have diversification," says Doyle. "Our goal was to be able to do everything from boxing to children’s programming to legacy acts to current bands to talent from TikTok."

In addition to music, The Paramount became a hub for boxing on Long Island early on with Joe DeGuardia’s STAR Boxing, which has become a mainstay attraction at the venue.

"A lot of our fighters go from The Paramount to Madison Square Garden and some of the biggest venues in the world," says Joe DeGuardia, President/CEO of Star Boxing. "Fighting at The Paramount has prepared them for the bigger fights because the atmosphere there is more vibrant than at a championship bout. Chris Algieri of Huntington is the first boxer we developed there and he went on to be a junior welterweight champion."

"This venue is probably one of my all-time favorites in the whole country," says Breuer, who just filmed his latest comedy special there and has done an extended residency. "The laughter in that room comes right at you. I explode every time I’m in that place."

Fellow LI comedian Kevin James, who also plays the venue often, agrees, "It has a great hometown feel, where you can really connect with an audience. The crowds are incredible!"

Throughout the years many entertainment legends have performed at The Paramount including Don Henley, Rod Stewart, Pat Benatar, John Fogerty, Elvis Costello and B.B. King. Some even made surprise appearances.

Ed Sheeran had a radio promotion event at The Paramount on July 5, 2014 and liked the room so much he asked the owners if he could play a concert that night.

"The show sold out in 11 minutes," recalls Condron. "He tweeted it out and you could literally hear kids running down the street. It was quite an experience."

Perhaps the most memorable moment was when the Piano Man himself took the stage.

"Billy Joel playing the venue was otherworldly," says Ubertini. "Everybody lost their mind."

Michael DelGuidice, lead singer and piano player for Joel tribute band Big Shot which regularly plays The Paramount and is set to appear on Oct. 30, will never forget Oct. 16, 2013 because it was the first time he ever publicly performed in Joel’s band.

"The Paramount is where Billy hired me therefore it’s a special place," says DelGuidice, who has been a member of Joel’s band for eight years. "He asked me to join the band right on the stage. I was completely blown away."

Initially DelGuidice was asked to sit in for Joel on vocals as the band rehearsed at The Paramount for its European tour. Then he was added to the band singing background harmonies and playing guitar. After rehearsing for a week, Joel decided to do an impromptu gig.

"You can only imagine the kind of excitement," says DelGuidice, 50, who grew up in Miller Place. "It was nuts."

Many people enjoy the convenience of The Paramount noting that the venue is accessible to residents of both Nassau and Suffolk.

"It’s centrally located right off Route 110," says Mike Finnegan, 63, of New Hyde Park, who has attended multiple shows, including Joe Walsh, Jeff Beck plus Ray Manzarek and Robby Krieger of The Doors. "You can see major acts there without trekking to Manhattan."

In addition to delivering hundreds of performances a year, the venue also boosts the local economy.

"The Paramount has been a great asset to the Town of Huntington," says Town Supervisor Chad A. Lupinacci. "It is definitely an economic engine that brings people to the area to visit local bars and restaurants. Basically, it’s the epicenter of the downtown making Huntington the place to be."

INSIDE THE FOUNDER’S ROOM

Deep inside The Paramount lies another venue, a secret members only club called The Founder’s Room, a 1920s themed speakeasy, which is a world all its own.

“It’s unlike anything I’ve ever seen,” says Al Isaacs, 51, of Levittown. “It takes the idea of VIP treatment to a whole new level. They set the bar very high.”

Among the old jugs, barrels and moonshine distiller, there are two bars, seven flat screens and various themed rooms to lounge in while enjoying a seasonal food menu. The Teddy Room features leather chairs, a bearskin rug and antlers on the wall while the Young Frankenstein Room is hidden behind a bookcase with lab knick-knacks, big chains and weapons on the wall. Then there's the Shawshank Room, which is literally inside a jail cell.