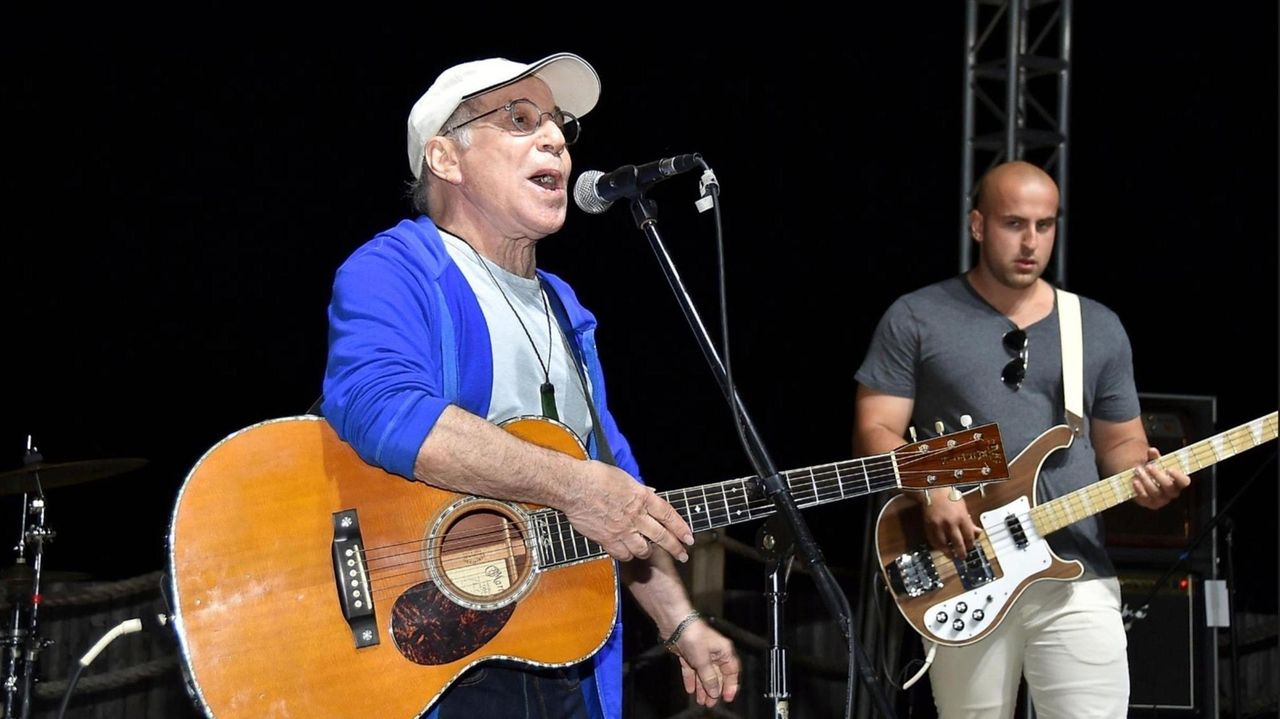 Paul Simon performed “You Can Call Me Al” during a surprise performance at the Montauk Music Festival Rocks the Lighthouse concert on the lighthouse lawn Saturday night. Credit: Newsday / Vera Chinese

A community fundraiser for the Montauk Point Lighthouse was illuminated by serious star power Saturday with a surprise performance by music legend Paul Simon.

The singer-songwriter, 76, who owns a Montauk home just a few miles west of the lighthouse, took the stage for a four-song set along with local band The Montauk Project and other musicians who performed at the Montauk Music Festival Rocks the Lighthouse concert on the lighthouse lawn.

The 12-time Grammy Award-winning artist, who announced his retirement from touring earlier this year but agreed to the Montauk show, previously performed at the Back at the Ranch fundraiser series in the 1990s. The events, held at Deep Hollow Ranch in Montauk, helped fund a revetment project to bolster the shoreline surrounding the historic lighthouse.

Simon’s performance at the concert, where acts Jessica Lynn, Tuatha Dea and Montauk’s Kate Usher and the Sturdy Souls also performed, was not announced beforehand. Word-of-mouth traveled fast through the beach town, though, with pre-concert sales surging 24 hours before the event to the maximum 500 tickets, lighthouse keeper and Montauk Historical Society board member Joe Gaviola said.

Organizers said they admitted at least 3,000 people to the show, many of whom purchased their tickets at the gate.

“He drew all of that in a day,” Gaviola said, adding that the historical society, which owns the lighthouse, purposely did not make the announcement sooner. “Paul wanted this to be a low-key event and to keep it local.”

Fundraising totals were not immediately tallied, but Gaviola said he was thrilled with the turnout. The lighthouse, which was built in 1796 and is a National Historic Landmark, relies on revenue from visitor admissions and fundraisers to keep the proverbial light on.

Most concertgoers were aware of the evening’s special guests, though others were shocked to hear Simon’s voice sing “Late in the Evening,” his first song of the night, over the sound system. He followed with “50 Ways to Leave Your Lover,” “Me and Julio Down by the Schoolyard” and “You Can Call Me Al.”

Friends Jen Jamet, 29, of Montauk and Liz Heimerle, 27, a Smithtown native now living in Weston, Connecticut, were in town for Heimerle’s bachelorette party. They and their friends were already scheduled to go to the concert, but said the night was made all the more special by the surprise performance, which they learned of beforehand.

“We thought it was so much cooler,” said Heimerle, who is planning a September wedding in Albany. “We get to see an awesome concert and be in a really beautiful place.”

Eleanor Klepper, 51, a Tappan resident who spends weekends in Montauk aboard her boat with her husband, Chris, had no idea he’d be there.

“Oh my gosh, it was great. All of sudden we’re standing there and I said, ‘That’s not him,’” said Klepper, who said she was listening to tunes by Simon and Garfunkel, the musician’s original band, aboard her boat this afternoon. “It was a great night already. That made it over the top.”