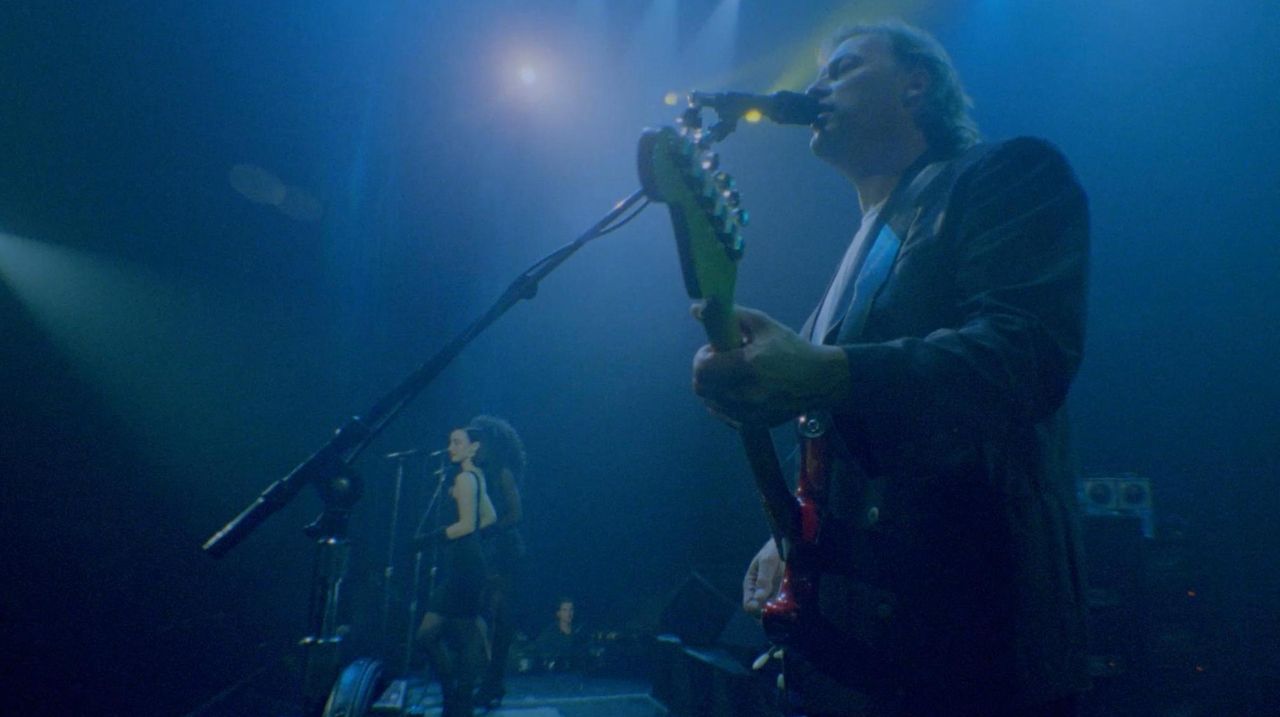 Pink Floyd’s “Learning to Fly” from the band’s “Delicate Sound of Thunder” live album and concert film was recorded and shot at Nassau Coliseum in August 1988. Credit: Pink Floyd (1987) LTD

Pink Floyd may be from England but Long Island occupies a prominent place in this progressive classic rock band's history. The group staged two of its biggest concert events at Nassau Coliseum in Uniondale during the 1980s. One is getting the full box set treatment on Friday, Nov. 20 when the band’s Long Island shows from August 1988 are documented on "Delicate Sound of Thunder." The band released a double live album and VHS home video of the same name 32 years ago. However, Floyd fans have been waiting for the re-mastered audio release of the full 23-song set complete with accompanying concert film on DVD and Blu-ray.

"Pink Floyd was always ahead of the curve. No one had the stage technology like they had," says Lance Elder, former Director of Operations at Nassau Coliseum, who worked directly with the band. "The band put speakers under the first level of seating with sub-basses, which really gave the show some heavy sound. They even had lighting pods over the crowd that went up and down throughout the course of the show. The fans couldn’t believe what they were seeing or hearing."

When Pink Floyd released its 80-minute double concept album, "The Wall" in late 1979, the band decided to put on a massive stage production on the east and west coasts in lieu of doing a full tour of America. Forty years ago, Floyd brought that show to Nassau Coliseum on Feb. 24-28, 1980 after a seven-night sold-out run at the Los Angeles Memorial Sports Arena.

However, this was no ordinary rock concert. The show involved giant puppets, an airplane flying over the crowd, animated film projections and the band performing as a 100-foot wall was built at the front of the stage.

"This was unlike anything I’ve seen before or since," says former WPLJ DJ Jimmy Fink, who was in the crowd. "It was simply the greatest show I ever witnessed."

Tickets were $15, which was considered expensive at the time. However that didn’t stop them from selling out rapidly.

"We were used to paying $7.50 to see the Marshall Tucker Band and these seats were double that," says Ken Falk, 56, originally from Glen Head, who caught the second night (Feb. 25). "But, it was worth it."

People flew in from all over to see the show, even drawing celebrities like Andy Warhol, Stevie Wonder and Diane Keaton.

"The show was breathtaking, almost like a piece of theater," says Robert Mitchell, 56, of Elmont who bought his tickets at Ticketron inside A&S in Hempstead. "A wall was built across the stage with bricks being brought out with each song. They’d break loose a couple of bricks so the crowd could see what’s going on. It was a phenomenal undertaking and full of shock value."

By intermission, the wall was solidly built and the crowd was puzzled.

"Once the wall went up, I was confused thinking, ‘How are they going to do anything from here?’ " says Marian Mastrorilli, 59, of Huntington, who caught the final night (Feb. 28). "Then a little part of the wall would descend and there would be a scenario in there like a little living room set. The films they played on the wall were trippy and groundbreaking for the time. The whole night was just surreal."

One of the biggest moments was when guitarist David Gilmour performed his now-classic song, "Comfortably Numb."

"Gilmour appeared on top of the wall with a giant spotlight behind him," says Tom Burke, 63, of Lynbrook, who saw the third dhow (Feb. 26). "His shadow just covered the entire audience. It was amazing."

Floyd strictly played "The Wall" album top to bottom without any encores or catalog songs.

"When I came out of the show I couldn’t talk for 20 minutes because it was so powerful," says Garry Garnet, 63, of Hauppauge, who was first online to get tickets. "I had the chills from beginning to end."

After not touring in America for many years, Pink Floyd returned with a new album, "A Momentary Lapse of Reason" and a two-year worldwide tour this time without bassist/vocalist Roger Waters. Midway through the band decided to record a live album and shoot a concert film at Nassau Coliseum, August 19-23, 1988. The five shows completely sold out with 71,862 tickets raising $1,796,550 at $25 a ticket.

"The band had a good experience with us in 1980. They knew us and they knew the building would work for them," says Elder, who has retired to East Northport. "It was appealing to them because we were slow in the month of August and they could have time to come in and set up. It was a huge operation."

The band initially planned to do four dates but added a fifth to capture extra material.

"On that last show, they used 14 cameras," says Elder. "I’ve never done anything that big. Even sporting events never had that many."

The last show was a good luck charm for Paul Gunst, 51, formerly of Bohemia, whose then-girlfriend scored him a ticket for the tacked-on show after he missed "The Wall."

"I was supposed to see ‘The Wall’ as a kid with my older siblings but my dad wouldn’t let it happen because I was 11. I cried my eyes out. Nobody knew it was going to be the last tour with Roger Waters," says Gunst. "But, I didn’t care that Waters wasn’t in the band anymore. I just was glad I got a chance to see some form of Pink Floyd live."

Rob Borra, 51, of Shoreham worked as a union security guard at Nassau Coliseum wearing the old orange shirt and blue jeans uniform. As a result, he saw all five shows.

"I worked three shows then saw two as a fan," he says. "In fact, I worked two double shifts because David Gilmour requested to have someone be on stage overnight to guard all the equipment. He said, ‘If they don’t have a pot of coffee for you I’ll bring it myself.’ I sat on stage with a coffee pot admiring their whole set up. It was beautiful."

Although there was no wall, there were still plenty of opticals as part of Floyd’s live show.

"They had tons of lights and lasers, which were incredible to watch along with this giant round screen above the stage with all these images," remembers Jay A. Hansel, 54, originally from Sayville. "Pink Floyd’s visuals always fully expressed the vibe of their music."

For Scott Merritt, 47, formerly of Greenlawn, the key moment on Floyd’s last show, which was his first-ever rock concert, was the band’s opening song, "Shine On You Crazy Diamond."

"The lights went down, I heard those notes and it was like a gut punch," says Merritt. "It’s a live music dragon that I’ve been trying to chase since. Nothing compares."

Andrew P. Gozinsky, 53, of Old Bethpage recently watched the 1988 concert film with his son Sam during the spring quarantine recalling the show he attended in his early 20s.

"It was like reliving it all over again," says Gozinsky, who stretches each morning to Floyd music. "That was one of the finest concert productions I’ve ever seen. Having Pink Floyd come to Long Island was an honor. When they played the Coliseum, I felt like they were in my own backyard."

OPENING FOR 'THE WALL'

In early 1980, comedian/actor/writer/voice-over artist Gary Yudman of Southampton received a call that would change his life.

Originally Yudman treated it like a regular gig and went on stage to perform his material. Then he got called into the band’s dressing room where bassist/vocalist Roger Waters decided to make him part of the production.

“Roger showed me the script for the show. It said, ‘Compère [British version of emcee] talks to the crowd and infuriates them by droning on and on.’ He wanted the crowd and the band to be at each other,” says Yudman. “He said to draw out some regulations. I’d say things like, ‘Please no explosions, they’ll be enough explosions in your mind. I think the band is ready to go….aaaaaand not quite yet.’ This really stirred up the audience.”

Waters then instructed Yudman to return to the stage after guitarist David Gilmour performed “Comfortably Numb” looking like he had aged 100 years.

“I evoked a zombie,” he says. “They dressed me up in a gray suit and gray hair with robotic eyes.”

In addition to his appearance, Yudman had also altered his verbal presentation.

“He talked real slow and distorted trying to play with people’s heads,” says Tim Casey, 61, of New Hyde Park, who was in the crowd. “It was quite funny.”

The band loved Yudman’s performance so much they brought him overseas where he opened six nights at Earls Court in England August 4-9, 1980 plus five more on June 13-17, 1981.

“In Europe the audiences got angry but with a little laughter behind it,” he says. “However, the audience had the fever on Long Island.” -- DAVID J. CRIBLEZ