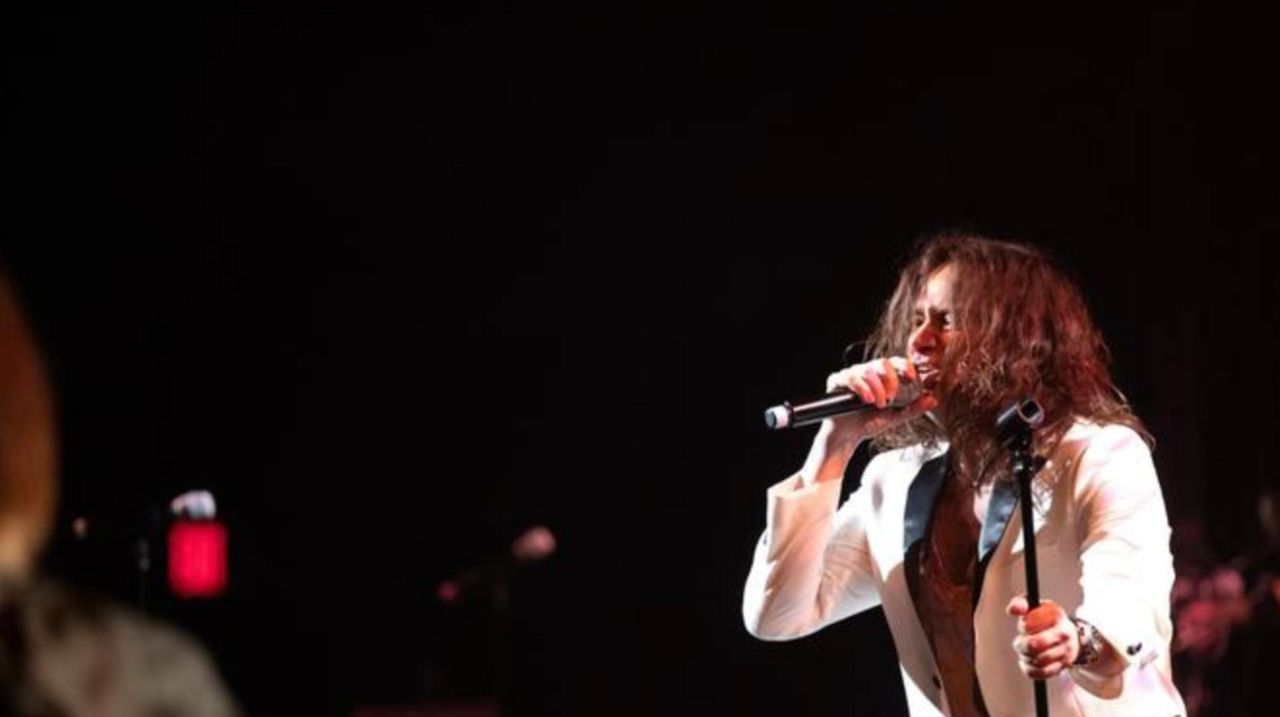 Newsday reporter Marissa Sarbak talked to a cast of four Broadway singers and members of the band Wonderous Stories as they get ready to perform at Tilles Center for the virtual concert celebrating the 50th anniversary of "Who's Next." Credit: Kendall Rodriguez

The stage at LIU Post’s Tilles Center in Brookville has been dark for a year due to the pandemic. However on March 10 the performing arts center came alive for the filming of "Reflections of ‘Who’s Next,’ " a crowd-less virtual concert celebrating the 50th anniversary of The Who’s classic 1971 album. The program will be available to stream on April 30, May 1 and 2 via tillescenter.org.

"If you are a die-hard Who fan looking for the music to be performed just like [Who lead singer] Roger Daltrey and [Who guitarist/songwriter] Pete Townshend then this may not be the show for you," says producer Gary Hygom of The Rock Project, who presented the concert. "However, if you are a lover of the music itself and are willing to explore its possibilities while celebrating the meaning of the material, then you’ll enjoy it. The heart of The Rock Project is to expand on the music in ways that cover bands don’t. We are looking to push the boundaries."

"What we’ve done is a lot different from what you typically see with other streaming shows. Many people are performing from their homes," says Sargent. "However, we were able to get all our musicians on stage with our sound guys, lighting technicians and stage managers all in one place safely with masks and social distancing. You had to be prepared to go with the flow and bring your A game."

The cast came together quickly with limited rehearsals. Everyone was learning the material separately and the show was pulled together on site in a few days.

"In our business, you get used to meeting people fast, working together intimately and then parting ways," says Wartella. "In this case, all of our musical styles matched up and our creative ideals were on the same page."

Gordon adds, "There were no divas, no egos. We were a circle of light ready to explode."

After a year in lockdown, the cast was anxious to return to the stage and start performing.

"It felt overwhelming because it’s been so long. But, I was really grateful," says Wartella. "To not sing for so long has been really hard on my creative soul. I was soaking up every minute."

Maroulis agrees, "To come together under these conditions and in this short time frame was wild. It was all about grip it and rip it."

Everyone involved strictly followed COVID-19 protocols in order to make the event happen.

"Tilles was the safest place to do this. The stage is big, which gave us the chance to spread out and the backstage dressing rooms are huge. Plus, everyone was double masked offstage," says director Stephen DeAngelis. "Every time a microphone was used, between a break the mic heads were taken off, cleaned and sanitized. No one touched those mics except the person they were intended for."

However, playing for an empty venue and trying to reach the home viewer through the camera took some getting used to.

"I literally pretended there was a live audience of 2,000 people in front of us," says Wartella. "That helped make the energy happen so people at home would get that vibe through the screen."

Sargent claims, "Each of us tried to find moments to look into the camera and connect with the viewing audience. We walked the fine line of doing a performance for the screen or for an imaginary live audience."

Wonderous Stories, which surrounded the singers on stage, has been playing The Who’s music for decades. In fact, they previously participated in a concert version of the rock opera, "Tommy" at the Patchogue Theatre in 2019 with Sargent, Gordon and Wartella. These Broadway singers, who are used to playing with an orchestra in a pit, enjoyed having the band on stage with them.

"This is more immersive," says Maroulis. "You can feel them on your back. It allows us to create a world from a blank stage."

Gordon adds, "With an orchestra, you are not connected, but band musicians listen to you. You have to keep up with an orchestra whereas a band will stay with you. It makes a big difference."

The first half of the show is "Who’s Next" performed in its running order followed by a greatest hits set showcasing Townshend’s versatile writing.

"Townshend gives the singer an opportunity to display their emotions in the same way a musical theater composer would," says DeAngelis. "Each song is narrative and character driven. He writes that way by instinct."

The songs from "Who’s Next" were originally part of a sci-fi rock opera called, "Lifehouse." However, the project went bust.

"Nobody understood what Townshend was trying to say. He almost had a nervous breakdown," explains musical director/keyboardist Tommy Williams of Wonderous Stories. "The Who decided to record the best songs and forget about the story. It’s the album that laid the blueprint for what The Who would become in the ‘70s."

STREAMS TO LIVE ON

Hygom says he feels streaming shows are here to stay even beyond the pandemic. But, he plans to follow up this stream with a "Who’s Next" tour when live shows resume.

"Streams are going to be a way for the audience to test the waters. They’ll be thinking, ‘Do I like this? Is this something I want to see live?’ " says Hygom. "A tour for this show is currently in discussion. However, it may not be until the first quarter of 2022. If it does happen, we’d like to kick it off at Tilles Center."

REFLECTIONS OF “WHO’S NEXT”

WHEN/WHERE Streaming starts at 8 p.m. on April 30 through May 2

The Who’s 5th studio album, “Who’s Next” (released August 14, 1971), features some of the band’s most iconic songs. Here are some tracks that are highlighted in the show from the triple-platinum record:

“Goin’ Mobile” Sung by Michael Wartella, the tune has a futuristic quality to it. “Pete Townshend was ahead of his time back then,” says director Stephen DeAngelis. “He was writing about virtual reality before there was virtual reality. It was only at best science fiction.”

“Bargain” — This spiritual song is presented as a duet between Wartella and Lana Gordon. “People assume it’s about a romantic partner saying I’d give up anything I had to be closer to you,” says Wartella. “However, Townshend wrote that song about God and the universe.”

“Won’t Get Fooled Again” — This massive FM radio staple ("Meet the new boss/same as the old boss") tackled by Justin Matthew Sargent, features Who singer Roger Daltrey’s famous mid-song scream. “No one should ever try to do Roger Daltrey. My goal was to make it uniquely me,” says Sargent. “I wanted to have this unbridled animalistic scream but also keep it a bit theatrical by ending with a nice fat vibrato.”

“Gettin’ in Tune” — Singer Lana Gordon took on this well-known Who album track with great trepidation. “It was the most challenging one because it sat low in my voice,” says Gordon. “There was something about that song that made me get out of my comfort zone. But, it really spoke to me. I viewed it in a spiritual sense like getting in tune with yourself. Especially during this time when things have been shut down for artists.” — DAVID J. CRIBLEZ