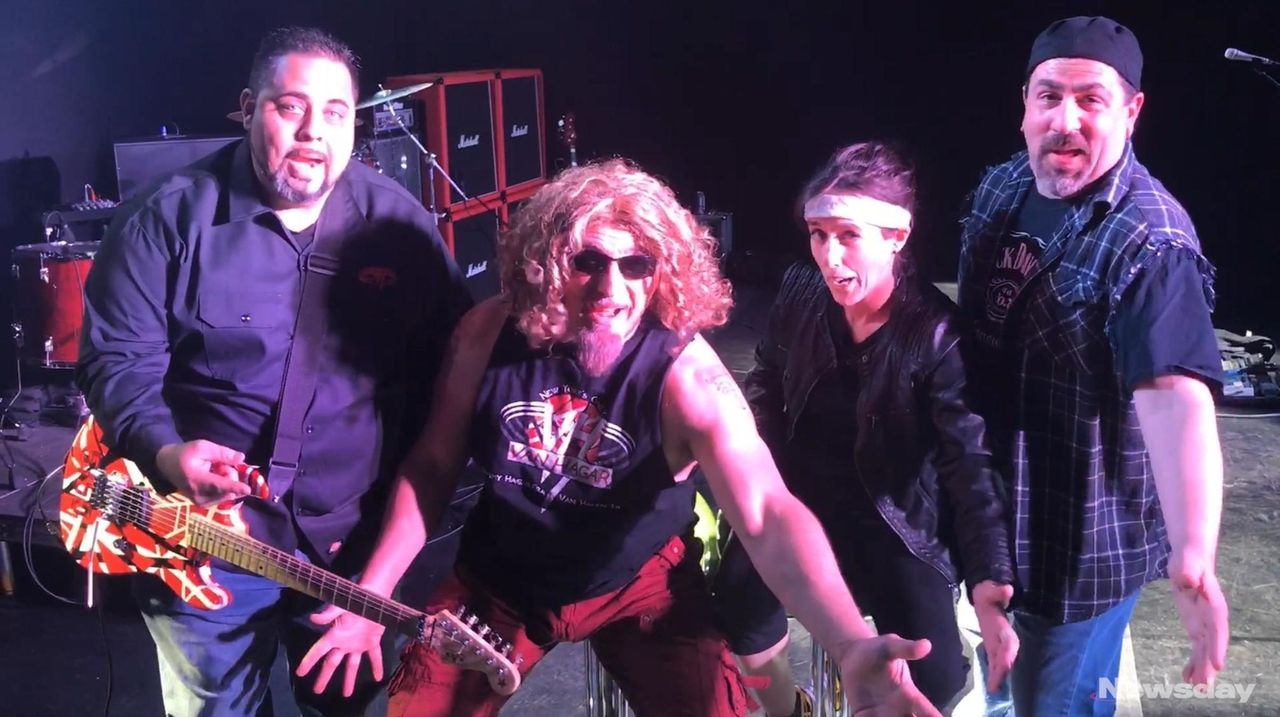 Late January is not a prime month to draw a crowd, but on this particularly cold night there’s a line around the block at The Paramount in Huntington for a sold-out show featuring Voyage. Although the name might not be familiar, the songs played are, because Voyage is a Journey tribute band.

“People are responding because Journey has a great body of music with incredible melodies,” says lead singer Hugo Valenti of Islip who sounds and looks strikingly like former Journey frontman Steve Perry. “The songs are bona fide classics and I get to play rock star for a night.”

The show was so popular that The Paramount put tickets for a July 27 date on sale the same night and people were lining up to purchase them after the show.

“Some of these acts are so close to the real thing that for the experience and price it really can’t be beat,” says Adam Ellis, The Paramount’s director of marketing.

Tribute bands have been popular for decades but within the past year their presence has increased dramatically across America, but especially on Long Island. Many fans view them as an affordable option when they want to go out to see live music.

“Concert ticket prices are out of control. People have families, homes, and kids going to college, therefore every dollar counts,” says Jim Chinnici, 44, of Baldwin, who plays bassist Nikki Sixx in the Mötley Crüe tribute band Theatre of Pain and lead vocalist Bret Michaels in Fallen Angel, a Poison tribute. “Once you get through the night you wind up spending $400 to $500. A lot of people don’t have that kind of money lying around.”

Tickets to a tribute band show typically range from $10 to $25 and some bills include two acts per night.

“For $20 to $30, you came come out, see a killer band with quality musicians, get some drinks and have a great time without taking out a loan on your house,” says Rick Cappiello, booking manager of Mulcahy’s in Wantagh, where tribute bands are the main draw. “It could cost you that just to get into New York City.”

Heading west to the Big Apple is another hurdle concertgoers face when seeking live entertainment.

“The city is a daunting thing. You really have to work yourself up to attack it,” says Dan Welsch, managing partner of 89 North in Patchogue, whose concert roster is one-third tribute bands. “You have to think, where are we going to park? How much is it going to cost? What’s the best route? Should we take the train?”

Tribute bands typically have early start times and play at local venues that are accessible by car.

“As you get older you don’t want to venture into the city. This is a good alternative, plus it’s a more relaxed atmosphere,” says Rhiannon Cassone, 25, of Valley Stream, who recently came out to Mulcahy’s to see boy-band tribute Larger Than Life. “You don’t have to worry about missing that last train or else you’ll get stuck at Penn Station in the early morning hours.”

Tribute bands are not just a cost factor for the fans but also for the venues.

“Some tribute acts play for a flat fee. Others will play for a cut of the door,” says Welsch. “Whereas national acts are risky because they get a hefty guarantee. Whether there’s one person or a 1,000 people in the crowd, you still have to pay them that number.”

CLINGING TO THE FAMILIAR

Tribute bands on Long Island typical draw people ranging in age from their mid-20s to early 70s, depending on the act. Either way, the concept is based on pure nostalgia.

Meanwhile at The Space in Westbury, Jimmy Cannizzaro, 56, who grew up in Valley Stream, came to hear Godfrey Townsend put his spin on Eric Clapton.

“People want to hear the old songs because it brings them back to a place and time,” he says. “Sometimes you can go see the original artist and they won’t even play the songs the way you grew up hearing them on the radio. But the tribute bands do it like the record and that’s cool.”

In recent years, such artists as David Bowie, George Michael, Prince, Tom Petty, Glenn Frey (Eagles), Gregg Allman (The Allman Brothers Band) and others have died. Many tribute bands serve as a way for fans to continue to connect with their music in a live setting.

Mike Epstein, 55, of Smithtown takes on the role of Tom Petty in Refugee, a tribute to Tom Petty and the Heartbreakers. Because Petty was a perfectionist, Epstein says he feels a strong sense of responsibility representing his catalog.

“You have to dig deep, study the material and get it right. There are so many little nuances that make a difference,” he says. “We don’t take personal liberties; we break each song down and play it note for note.”

Some bands dress up like the artists they are portraying but mostly it’s about sonic duplication. One of the more popular groups is Led Zeppelin tribute band Get the Led Out, who tend to play multiple nights in Long Island theaters such as The Paramount and The Space at Westbury.

“Their popularity climbs exponentially every time they come,” says Jeff Siegel, general manager of The Space at Westbury. “When they started playing here they’d sell 400 tickets. Now they sell out every time because they deliver.”

For all these reasons, the future looks bright for tribute bands. Moreover, tributes are even being made to bands like Huey Lewis and the News (Back in Time) and are getting as specific as a Sammy Hagar-era tribute to Van Halen called Van Hagar.

“I don’t see it slowing down at all. If anything, it’s speeding up,” says The Paramount’s Ellis. “There’s room to grow because the demand is certainly there.”

Darion Mancini, 45, of Mount Sinai was about to launch a recording career in 2000 and backed out of her label offer after experiencing some of the ugliness of the music business.

“I’m a family person and I wasn’t about to lose my dignity,” she says. “I witnessed a taste of #MeToo before the movement took place.”

Still wanting to sing, Mancini began doing some covers at her gigs and came upon a revelation.

“Whenever we’d do a Pat Benatar song, waiters would stop serving drinks and people would stop talking,” she says. “We realized that we had something.”

She put together Fire & Ice — a tribute to the music of Lindenhurst-raised Benatar.

“I had to put my original music on the back burner,” says Mancini. “The tribute band idea was a way to get in the door of clubs.”

For the past 15 years, Mancini has been performing sets of Benatar classics like “Treat Me Right,” “Love Is a Battlefield,” “Hit Me With Your Best Shot” and “All Fired Up” at casinos, festivals, Napper Tandy’s in Smithtown, Epcot Center’s “Sounds Like Summer” concert series at Disney World, and the Jones Beach bandshell.

In 2009, Mancini went to see Benatar perform at NYCB Theatre at Westbury and sent a note to her via the tour manager. Sure enough, Mancini was invited backstage.

“Pat was very gracious. She said she saw the Jones Beach bandshell video and thought I did a great job,” Mancini says. “Her family, who still live in Lindenhurst, started coming out to my shows. They are just sweet, beautiful people.”

Although she’s a tribute act, Mancini makes a point not to dress up like Benatar but rather deliver each song as herself.

“She knows I don’t want to be her. Nobody could be Pat Benatar. She’s amazing,” says Mancini. “I simply do my best singing her music, to celebrate the most incredible woman in rock.” — David J. Criblez

Catch a tribute band show at one of these local venues.

THE SPACE AT WESTBURY

May 19 The Fab Faux (Beatles tribute)