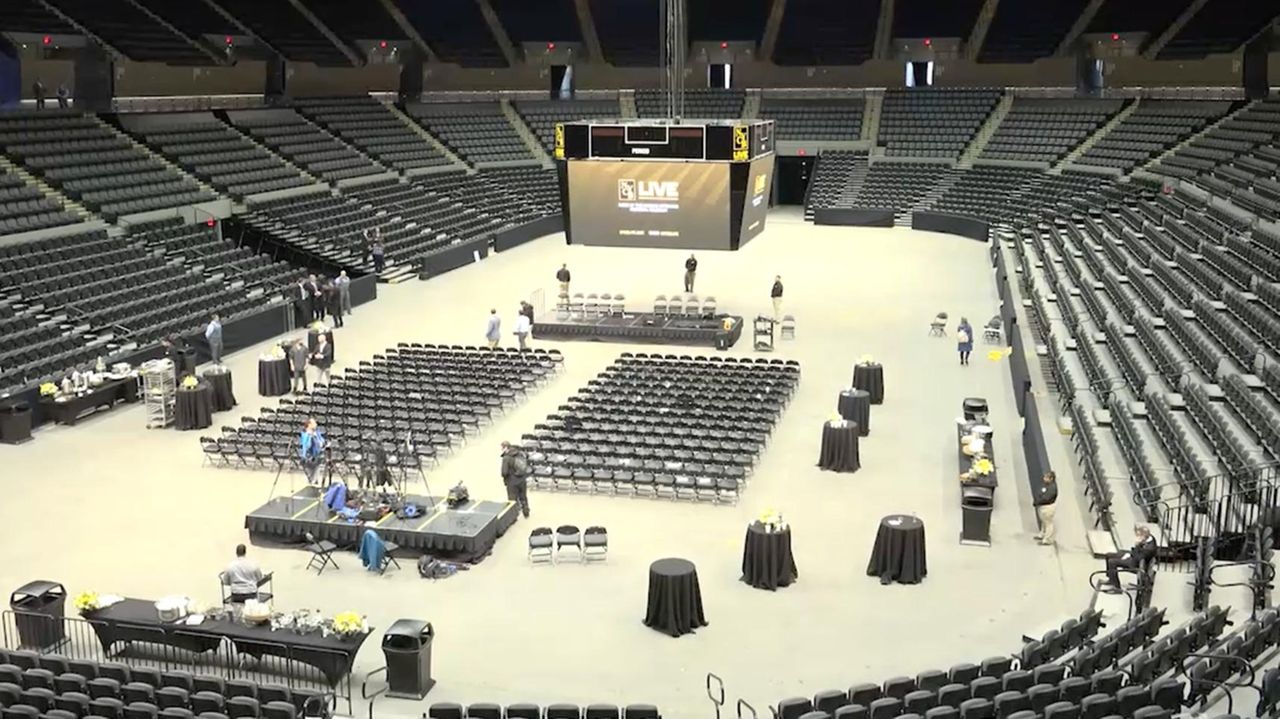 A transformed Nassau Coliseum was unveiled Friday after an 18-month renovation that modernized the arena with state-of-the-art upgrades designed to attract headline performers and a new generation of fans.

Ratner, executive chairman of Forest City Ratner Co., called the Coliseum an “iconic” venue that “would rival the Eiffel Tower” in Paris.

“The arena is a jewel on the outside and a dream living room on the inside,” Ratner said in a news conference.

Parking fee only gripe for fans at new Coliseum

“This Hub is more than just a sports and entertainment destination,” Mangano said. “It has the ability to be an economic engine.”

A new, wider outer concourse is paved with terrazzo rather than red quarry tiles, while a new interior walkway has been constructed to reduce congestion.

There also are new bathrooms and remodeled concession stands that include items from Long Island vendors.

But few reminders of the arena’s 45-year history remain.

A handful of photos of past concerts by artists including Prince and the Rolling Stones dot the main concourse and the backstage area. Four framed photographs of the New York Islanders — one for each consecutive Stanley Cup from 1980-1984 — are on the walls of the building’s lower level.

Otherwise, the building is stripped of the Islanders’ blue and orange colors, and the team’s former locker rooms are painted brown.

Brett Yormark, chief executive of Brooklyn Sports & Entertainment, parent company of the lead developer, Nassau Events Center, said the arena has been restored “to its former glory. . . . We have made Long Island’s new entertainment home a world-class destination with a first-class experience.”

Past efforts to rebuild or replace the Coliseum were unsuccessful.

In 2004, former Islanders majority owner Charles Wang proposed a privately funded, $3.7 billion development known as the Lighthouse Project. But the project, which included a renovated arena, 2,300 units of housing, a billion square feet of office space and a luxury hotel, was rejected by the Town of Hempstead as too dense for the community.

Mangano, a Republican who took office in 2010, proposed a public referendum on whether to spend up to $400 million in taxpayer dollars to rebuild the arena. Voters in August 2011 rejected Mangano’s proposal overwhelmingly.

The following year, Wang announced that the Islanders would move to the Barclays Center in Brooklyn.

In 2013, Mangano issued a request for proposals for developers of the Coliseum and its surrounding property, selecting Ratner’s bid. “We made lemonade out of lemons,” Mangano said.

Ratner’s lease calls for Nassau Events Center to pay Nassau 8 percent of all annual revenue generated by the Coliseum, including tickets and concessions, and 12.75 percent of parking. The deal guarantees Nassau a minimum of $4.4 million in the first year and $334 million over the next 49 years.

Mangano will hold his State of the County address at the arena Monday night, and Billy Joel will perform the first concert at the new Coliseum on Wednesday.

Local officials and dignitaries cut the ribbon at the opening ceremony of the Nassau Veterans Memorial Coliseum https://t.co/erxLk58vTp pic.twitter.com/nrC7fzakS2

The Long Island Nets, the NBA Development League team for the Brooklyn Nets, will play at the Coliseum beginning this fall. Yormark said the venue will also host boxing, bull riding and college basketball [Nassau Events Center has bid on the NCAA men’s basketball tournament beginning in 2019].

The Coliseum will have its national TV debut on July 22 with a UFC match broadcast live on Fox.