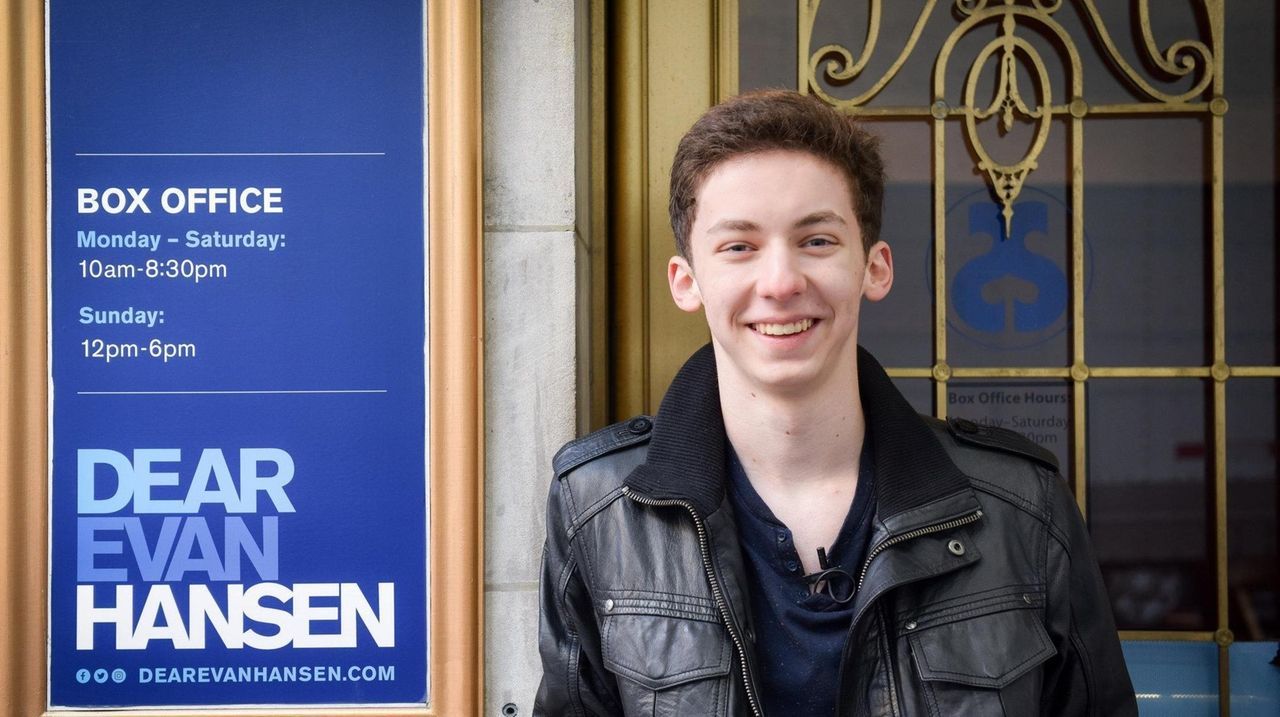 Andrew Barth Feldman spoke on Jan. 15 about being the first teenager to take on the leading role in the Tony Award-winning musical "Dear Evan Hansen." Credit: David Handschuh; Feldman family

It may have been icy cold outside, but inside the Music Box Theatre the hot Broadway musical “Dear Evan Hansen” was even hotter, with the audience fired up and leaping to its feet as the show’s newest star, Andrew Barth Feldman — a 16-year-old high school junior from Woodmere — took his first bow at the curtain call on Wednesday night.

His Broadway debut marks the first time an actual teen has starred in the teenage title role of the Tony Award-winning musical.

“The audience was completely electric,” Feldman said, in an email after the performance. “I had so many people from every point in my life in the audience, and they were VERY vocal. Naturally I was freaking out all day, so it was good to finally step out onto the stage.”

The audience cheered as Feldman took his place onstage in the dark, before the lights even went up.

But then, he noted, the nervous energy subsided a few minutes into the first scene, when Lisa Brescia, who plays Evan’s mother, joined him onstage. “Once I wasn’t alone and had someone to connect with, I was really able to drop into Evan’s very reactionary nature,” Feldman continued. “Gradually, the nerves and adrenaline started to wear off and I was able to really focus on what I was giving the audience.”

Among those in the nearly sold-out, 1,025-seat house were some 400 friends and relatives.

"It's insane to see one of my best friends up there," said Sammi Schneider, 15, a classmate of Feldman's, at intermission.

No doubt, he felt somewhat similarly. "I'm going to do this very quickly — it's soooo cold," Feldman said to a throng of cheering fans, post-show, at the stage door. Bundled in a parka for the arctic freeze (temps were hitting 9 degrees), he started briskly signing autographs.

His performance was not only a victory but also an endurance test for his mom. Barbra Feldman is an administrator at Lawrence Woodmere Academy, where her son is a student. “I’m just holding my breath until his first moment on stage,” she said before the show.

“Dear Evan Hansen,” which won six Tony Awards in 2017, including best musical and best actor in a musical for Ben Platt (2012's "Pitch Perfect" and the 2015 sequel), tells the story of an anxious high school student as he struggles to come to terms with the suicide of a classmate. Universal Pictures announced late last fall it had acquired movie rights for the show and Platt, 25, is reportedly in talks to star in the film.

For Andrew Barth Feldman, taking on this role at a relatively young age is tough, given its emotional and vocal challenges. But his mother said he’s up to the task, though she added that this is all a far cry from the first time the young actor ever stepped on a stage.

Back when he was just 3 years old, Feldman appeared in a nursery school performance at Temple Emanu-El (now part of Temple Am Echad) in Lynbrook — and was petrified. He was unable to stand in the lineup of little performers, and was given a chair to sit behind the children.

“He was adorable, but never in a million years did we think that his most comfortable place would be onstage,” said his mother.

“As a teacher, it's incredibly meaningful to see Andrew achieve his dream,” Partee said before the show. “Understanding how hard he has worked for this and then seeing him step into this role feels like fitting the last piece of a puzzle into its place. I feel Andrew is exactly where he should be, and I am beyond proud of him.”

LI teen takes the lead in Broadway's 'Dear Evan Hansen'A star will be born this month when 16-year-old Andrew Barth Feldman takes on his dream role in the Tony-winning smash.

'The Bachelor' star Colton Underwood comes out as gay
'Dad Stop Embarrassing Me!': Jamie Foxx's '90s throwback
Amy Schumer's Hulu comedy adds Michael Cera
'The Talk' returns with a show 'unlike any other we've had before'
Luke Bryan tests positive, sidelined from 'Idol'
'Thunder Force': Melissa McCarthy isn't so super in Netflix comedy
Didn’t find what you were looking for?