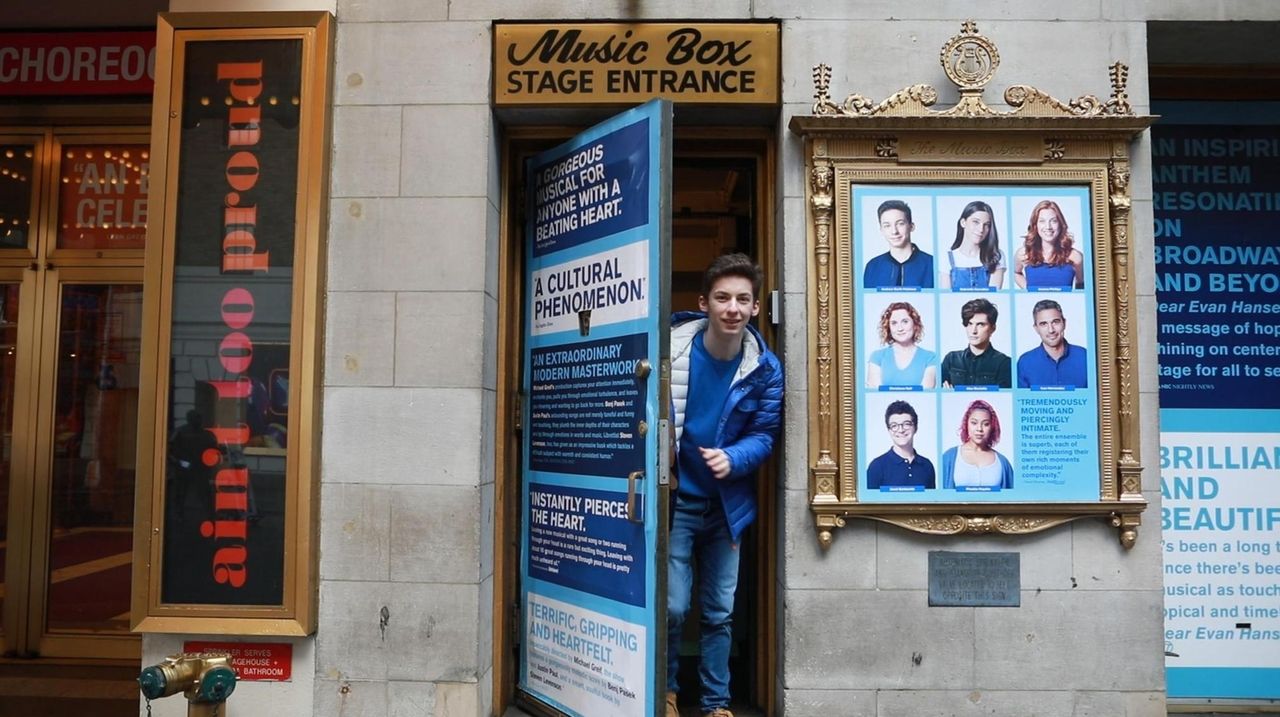 Woodmere teen Andrew Barth Feldman, who became a star last year in "Dear Evan Hansen," will leave the show on Jan. 26 before starting school at Harvard in the fall.  Credit: Newsday / Shelby Knowles

Ask anyone who knows Andrew Barth Feldman — the Woodmere teen turned Broadway star of the megahit “Dear Evan Hansen” — and they’ll tell you the same thing: You haven’t heard the last from him.

Though if you were hoping to catch him onstage at the Music Box Theatre in his star-making role, the clock is ticking. He’ll don Evan’s signature striped shirt and cast for the last time on Jan. 26, nearly a year to the day of his electric Broadway debut.

“It’s certainly been a long year,” says Feldman. “There’s been so much change.”

That change — some of it expected, some of it excruciating — is an understatement. But he utters those words with what sounds like equal parts gratitude and a quiet candor, He spent this past fall in a neck-wrenching volley, looking back at events he couldn’t have predicted, and looking forward — like many fellow 17-year-olds — focused on college application essays. In Feldman's case, he was writing his, and studying for the SATs, in between performances to packed houses and autographs at the stage door. Now, finally, he’s trying to stay in the present

“I’m really just trying to soak up every single moment I have on the stage,” he says.

“Dear Evan Hansen,” with music and lyrics by Benj Pasek and Justin Paul, and a book by Steven Levenson, tells the story of an anxious high school student enmeshed in a web of deception and mistaken identity in the aftermath of a classmate’s suicide. It won six Tony Awards in 2017, including best musical and best actor in a musical for Ben Platt, previously known for the "Pitch Perfect" film franchise.

Last year, at 16, Feldman was the first actual teen to take on the vocally and emotionally challenging role. Then a junior at Lawrence Woodmere Academy, he’d been plucked from obscurity in 2018 after winning at the Jimmy Awards, a national high school musical-theater competition. “Hansen” producer and West Hempstead native Stacey Mindich was in the audience.

“I just knew he’d be Evan,” says Mindich. “But I didn’t realize it would be so quickly.”

Evan, while a challenging role, seemed like a good fit. Aside from the sibling issue (Evan is an only child, Feldman has an older sister), the character and actor were similar. Like Evan, Feldman’s parents were divorced and he was raised by a single mom.

After training with a vocal coach for several months, Feldman debuted to a packed house, including his beloved high school theater teacher, Tasha Partee, and his mother, Barbra Feldman. Beaming with pride, his mom that night recounted how this was a far cry from his first stage appearance, in a nursery school performance at age 3, when he was so petrified he was given a chair to sit behind the lineup of little performers.

“He was adorable,” she recalled, “but never in a million years did we think that his most comfortable place would be onstage.”

New life for an 'old soul'

With Feldman's Broadway debut came a rush of fame, and brushes with stars. Lin-Manuel Miranda now follows him on Twitter. At a Broadway fundraiser, Feldman was photographed flanked by Jeff Daniels, Kelli O’Hara and Bryan Cranston. And one of his idols, Neil Patrick Harris, stopped backstage, and the two have kept in touch. “We just grabbed lunch the other day,” Feldman says, with enthusiasm.

Such distractions can be tough for any performer, but Feldman seems to have taken it in stride.

“He’s an old soul in a young body,” says Mindich.

Still, he had a lot to learn about what it takes to be a Broadway star. “You may have energy after a show,” Mindich explains, “but you can’t do all the press you want to do. You can’t sign every autograph. You can’t hang out with the cast. You actually have to go home. You need to get your sleep.”

“At the beginning, it was difficult to produce tears,” he recalls. “That’s sort of an expectation with this role. It’s still not easy for me but it’s something I don’t really worry about as much.”

He learned, like many a young actor, that less is more. Delivering the lines — simply, honestly — proved more powerful than amped-up drama or histrionics. “As long as I’m connected and feeling what Evan is feeling, then you’ll see the pain and heartache he’s going through. Tears aren’t the only way to show that kind of sadness.”

That he knows intimately.

If this all sounds like a dream come true, it was, until last summer, when Barbra Feldman, who he describes in his Playbill bio as his “superhero mother,” died suddenly after a five-week battle with cancer.

“When she passed, all I wanted was to get back to the show,” he says. He’d hoped to lose himself in work, but Mindich said no and take time off. He listened, and when he eventually returned, he found it to be therapeutic.

“Some nights, it’s very difficult,” he admits. “But … I feel her with me every night. Even if somewhere in act two I start to get very internal, then we get to ‘So Big, So Small,’ ” he says, referring to a number Evan’s mother sings about her love for her son. For Feldman, the moment brings real healing and catharsis. “That’s my recovery right there. [The show] has been a really great outlet for all the emotion I felt after all of it.”

Feldman now lives with his aunt and uncle and two cousins, who he grew up with and considers his brothers. For a long time, he’d planned to graduate high school and attend an acting conservatory.

“I was really, really determined, but my mom always discouraged it,” he recalls.

A Lawrence Woodmere Academy alum herself, his mother had gone on to get a law degree at Hofstra. She lobbied for a broader, liberal-arts education.

Feldman took the advice. He recently learned he’s been accepted to Harvard for next fall.

After his final bow at the Music Box Theatre, Feldman's time — for the first time in nearly 18 months — will be his own. Having studied with a tutor all last year, Feldman has enough credits to graduate high school. He won’t return to high school, though he plans to march with his class at graduation this spring,

Till then, he’ll keep busy, first producing a charity fundraiser for autism Feb. 9 and March 1 at the Manhattan club Feinstein's/54 Below. He’ll also serve as assistant director alongside Partee for Lawrence Woodmere Academy's upcoming musical “The Addams Family.”

“Andrew has always been a wonderful role model for others, and it does my heart a world of good to know he gets to be that for so many people, especially young people, on a larger scale now — that his reach is ever further and expanding,” says Partee. “His experience has given him all the more to share with others, and he does so with such an open heart.”

“If anyone has taught anyone,’ she says with a sense of maternal pride, “it’s been Andrew who’s taught me — about work ethic, and about realizing your dreams in the most graceful, kind way.”

At Harvard, he plans to concentrate on theater. Above all, he wants to be a storyteller, but there’s much to learn — writing, directing, dramaturgy.

“That was the decision — after all of this, I should have some normalcy and open up to other things,” he says.

His mom, no doubt, would approve.

“I think she’d be really … really happy,” he says, pausing a moment. “This is what she wanted for me.”

MEET THE NEXT EVAN HANSEN

After his final performance, Andrew Barth Feldman will pass the reins to recording artist Jordan Fisher, who will take on the title role in Broadway’s “Dear Evan Hansen” starting Jan. 28.

Fisher, 24, made his Broadway debut in 2016 in the cast of “Hamilton.” He is known for the Disney series “Liv and Maddie,” Fox’s “Rent: Live" and for winning the 25th season of ABC’s “Dancing With the Stars.”