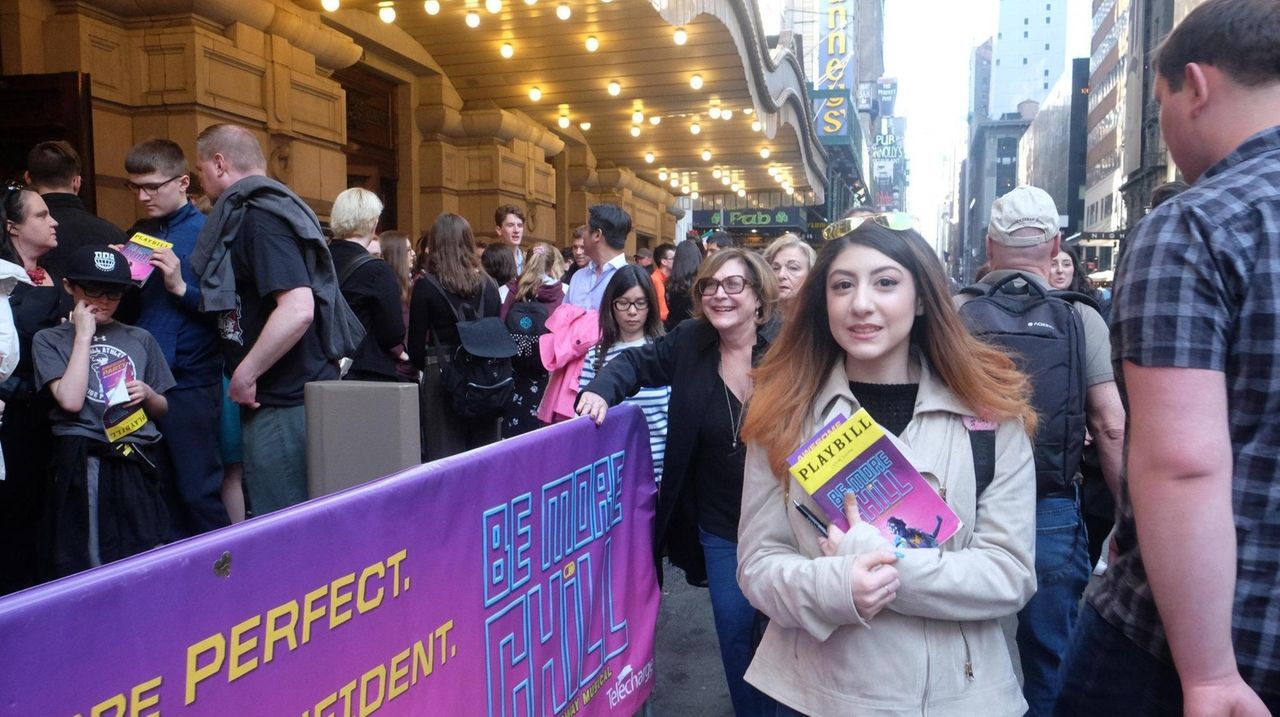 Newsday theater critic Barbara Schuler was joined by 17-year-old Gigi Manta of Hauppauge on April 6 at the Lyceum Theater to see "Be More Chill," where they were treated to a backstage tour and a meet-and-greet with the cast and crew. Credit: Todd Maisel

Or so the old saying goes.

So we thought it would be an interesting experiment if our four critics — Rafer Guzman (movies), Glenn Gamboa (music), Barbara Schuler (Broadway) and Verne Gay (TV) could all take a guest (someone who was not a professional critic, but wasn’t shy about expressing his or her opinions) with a passion for the same type of entertainment to attend an event with them, in effect becoming critics themselves.

After the event the two would compare notes and see just how much they agreed — or disagreed — on what they had just seen.

Gigi Manta, a 17-year-old senior at Hauppauge High School, was first introduced to the music of "Be More Chill" when she was looking for a song to perform in her musical theater class. She settled on "I Love Play Rehearsal," but soon discovered the rest of the score (written by Garden City native Joe Iconis) online, as did thousands of others. So Manta, who plans to pursue a theater education degree after she graduates, was thrilled when we asked her to be our guest reviewer at a recent performance. Here's an edited recap of our discussion about the show.

Schuler: When I reviewed the show after it opened in March, I wrote about how the creators really understood their demographics. I'm interested in your general impression of the show. Why does it appeal so strongly to young people?

Manta: Honestly, it exceeded my expectations. Ever since I discovered the music last year and revealed it to my friends, we would listen to the music … we would belt our hearts out to "The Smartphone Hour" especially. Seeing the songs actually performed on a Broadway stage was a magical feeling, especially knowing the background of how the show got to Broadway. Not once did this production lose my attention. Walking into the theater, you could tell the show was going to be everything you hoped for and more just by looking at the type of people in the audience. I think every single element came together beautifully — the lights, sound, costumes, props. They all brought the story of "Be More Chill" to life.

Do you feel like the show accurately represents kids in high school? I mean, I know no one's taking pills from Japan with quantum computers in them, but all the meanness, the bullying, the search for belonging?

The show is so important to my generation … it speaks to those who are in the same position as the character Jeremy [played by Will Roland, who grew up in Locust Valley], kids too afraid to speak out. High school is an amazing place to find yourself and pursue your interests, but that comes with the pressure to fit in and not being accepted.

I thought the performances were great. You? Did anyone especially move you?

I can say that I enjoyed every single one of their performances. The amount of talent on that stage was insane. It's a stacked house of powerhouse voices. Hearing the cue for "Play Rehearsal" made me nearly jump out of my seat … Christine [Stephanie Hsu] is one of my dream roles. The Squip [Jason Tam] was phenomenal, he killed every single moment, George Salazar … I knew he was good but I didn't know he was that good. Every opportunity he got to develop the character of Michael, he took it. And Will Roland, I adore him. When Will's on stage your eyes go immediately to him … for a character who doesn't have any self-confidence, his presence on stage is alluring. You could just tell the whole cast was having fun on stage and it made me want to go up there with them.

We all know that this is a story born on the internet after kids fell in love with the score. Did you have a favorite song?

I love opening numbers, the way they introduce characters, so "More Than Survive" definitely caught my eye. And one of my favorites is "Two Player Game." It's techy and it just shows their friendship.

And what about all those slick technical elements? It's a busy show, some critics thought a bit distracting. At times you almost feel like you're embedded in a computer game.

Sometimes it's hard to incorporate technology … but I think "Be More Chill" used every technical aspect you could think of and made it look easy. They introduced new instruments to me and the lights also added so much to the production.

You were so excited when we were leaving the show — and that's before you got to meet Will Roland and George Salazar backstage. What message did you leave with?

I think "Be More Chill" has a heartfelt message of listening to your inner voices rather than those surrounding you. You can only be the best you by fighting your own battles, which Jeremy kind of came to terms with at the end of the show. In reality, we can't all receive a Squip, which is why it's important to be in tune with who you really are. The show was also beneficial for the theater world because it's drawing so many young kids who ultimately will be in charge of keeping theater and Broadway shows alive. So I thought the show is kind of the spark we need to prove that Broadway isn't dying.

Everyone's a Critic: Gay, guest critic talk 'Game of Thrones'Newsday TV critic Verne Gay and Newsday reader and "Game of Thrones" superfan Bonifacio Diaz had plenty to say about last Sunday's episode. Everyone's a Critic: Gamboa, guest critique LI showWe often hear from readers disagreeing vehemently with what our critics said. Now, they get to be the critics. Everyone's a Critic: Guzmán, guest reviewer face offNewsday movie critic Rafer Guzman and Newsday reader Patricia Flynn attended a screening of "The Best of Enemies" together. Did they agree or disagree on the movie? Find out what they thought.

Harry, Meghan to delve into tough royal split with Oprah
TCM Picks: 'Robin Hood,' 'Woman of the Year'
'Coming 2 America': Lazy, charmless sequel
Miss Universe to air live from Florida in May
Chris Harrison wants to stay on as 'Bachelor' host
'King of Queens' cast to reunite for virtual benefit
Didn’t find what you were looking for?