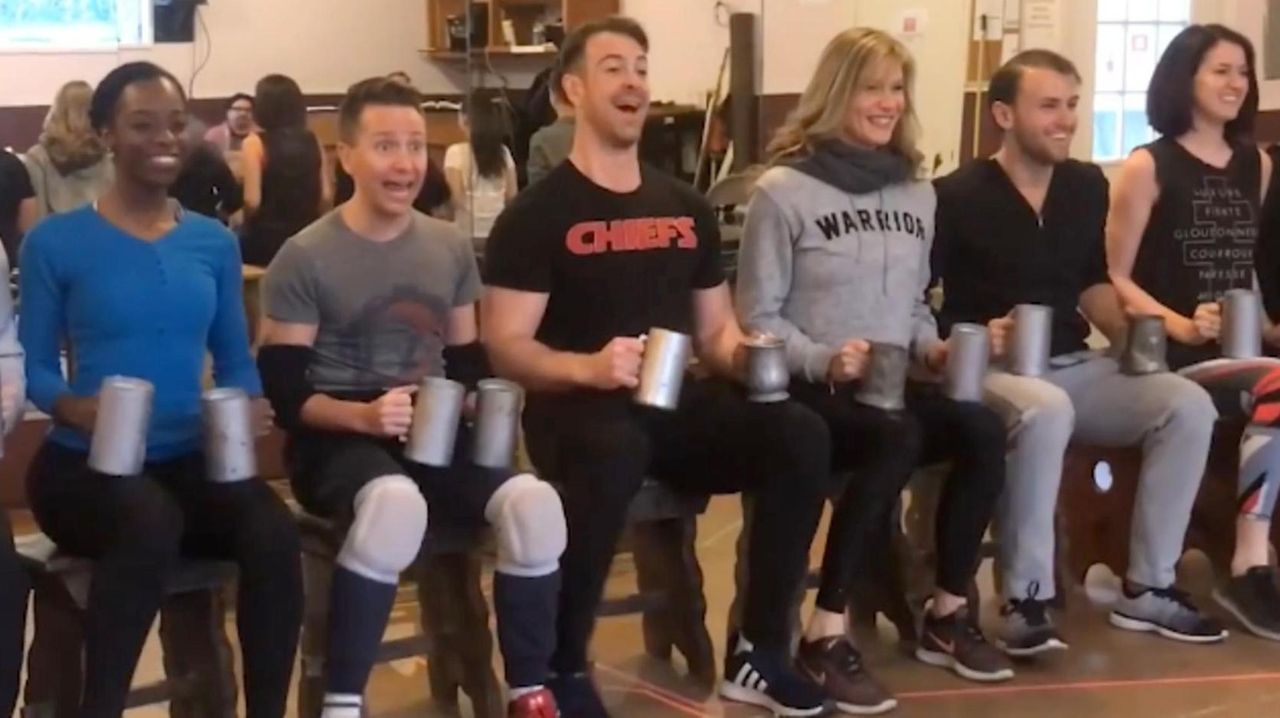 Gateway Playhouse prepares for the opening of "Beauty and the Beast" at Patchogue Theatre, Dec. 14, 2018. See behind the scenes activity, including dance rehearsals, makeup and costuming.  Credit: Newsday / David Criblez

“Five, six, seven, eight,” snaps choreographer Debbie Roshe as a cast of dancers move about the wooden floor marked with spike tape switching from a soft-shoe step to a tango to a can-can kickline led by a man with a pair of candlesticks for hands. The number is “Be Our Guest,” which serves as the Act 1 showstopper of The Gateway’s production of Disney’s “Beauty and the Beast” opening at Patchogue Theatre on Friday.

“This piece is basically eight dance numbers in one,” says Roshe. “Performing it requires over-the-top energy.”

The candle-handed man is Jonathan Hadley, who plays Lumiere, a French servant who was turned into a candelabra when a curse was placed upon the Beast’s castle. He has his dance steps down, but he’s still working onthe song lyrics. “Every kid coming to this show is going to know every word so I want to make sure I’m word-perfect otherwise they’ll say, ‘Hey, you said that wrong!’ ” says Hadley. “This is almost like Shakespeare. People follow along word for word.”

There’s a fluidity to this cast that makes each scene move seamlessly. Perhaps it’s because 21 of them are living under one roof on Gateway’s five-acre property in Bellport where they rehearse, rest and recreate.

“When a cast works together, eats together and lives together, they grow close. The more the cast gels offstage, the more it shows on stage,” says director Joe Minutillo. “When you have problems offstage, it bleeds right through. This cast in particular seems to be very tight.”

For example, at 8 a.m. each morning Emily Behny and Loren Christopher, who play Belle and the Beast, work out together at a gym in Patchogue. The actors have developed a strong rapport in the few weeks they’ve known each other.

“When you see someone as a person and not just a colleague from an artistic standpoint, some great colors can come from that,” says Christopher.

These two leads have portrayed their roles several times. Christopher was Gateway’s Beast in its 2013 production as well as reprising the role in Florida during the summer of 2017. Behny played Belle on the national Broadway tour from 2011 to 2012 for more than 500 performances.

“Like many young girls, I grew up watching the animated film and loved Belle. She was my favorite,” says Behny. “Belle has the characteristics of the person I hope to be — selfless, kind, strong-willed, unmoving, articulate and a dreamer. She is who I want to be when I grow up.”

Christopher has the physically taxing job of becoming a creature with large costume pieces and facial prosthetics. However, the transformation starts from within.

“You really have to feel like a Beast on the inside and that starts to carry through your body, voice and expressions,” he says. “Once they add the layers on top — wig, horns and prosthetics — it becomes a full body experience. You have to speak with everything.”

Makeup designer Ricky Vitus is the person who turns Christopher into the Beast, a process that takes all of 90 minutes.

“This is a different Beast from what you normally see,” says Vitus. “He’s a more realistic version than the cartoon.”

“We are using human hair,” says Upshur. “He’ll be more of a honey blonde giving the character a natural feel.”

Most of the show’s comedy comes from the duo of Gaston, the macho pursuer of Belle’s affection, and his flunky LeFou, who he flips around on stage and even uses as a barbell at one point. This is old hat to Joe Hager and Courter Simmons, who have played their roles multiple times before, as well as together for Gateway in 2013.

“It’s very comfortable because we know each other already,” says Simmons, who is playing LeFou for the seventh time. “He’s physically picking me up and throwing me around. Because we trust each other it makes that part a lot easier.”

“We have a prearranged repertoire to give the director with multiple choices,” adds Hager, who is on his fourth portrayal of Gaston. “It helps us get stuff done that much faster.”

In an old barn on the property, a production meeting irons out many details.

Prop master Mitch Domer is altering the top of Lumiere’s candlestick hands. “We didn’t want a flashing LED feel, but more of a flicker movement,” says Domer, who molded a Christmas ornament to replicate the cartoon flame.

Meanwhile technical director Brandon Cheney announces that the stage at Patchogue Theatre needs to be extended by three feet.

“It’s not quite big enough to hold all the scenery,” says Cheney. “We are building an extension over the orchestra, but it won’t affect the house seats.”

Backstage during the show, the costume team says it is set to help each cast member get in and out of costume.

“You have to be prepared for anything and everything,” says wardrobe supervisor Jordan Saylor. “It’s a lot of organization on the front end and then a big adrenaline rush kicks in. It’s very much like a dance using the same process every time, ‘Right leg, left leg, pants up, shirt on.’ It’s all very rehearsed and in the moment.”

The day before Thanksgiving, an actor cast as Mrs. Potts had to drop out of the show, leaving casting director Michael Baker with a hole to fill just days before rehearsals began.

“It was a bit of a nail-biter ,” Baker recalls. “You are never done casting until the final curtain because you just don’t know what could happen. But the show must go on.”

DISNEY’S ‘BEAUTY AND THE BEAST’