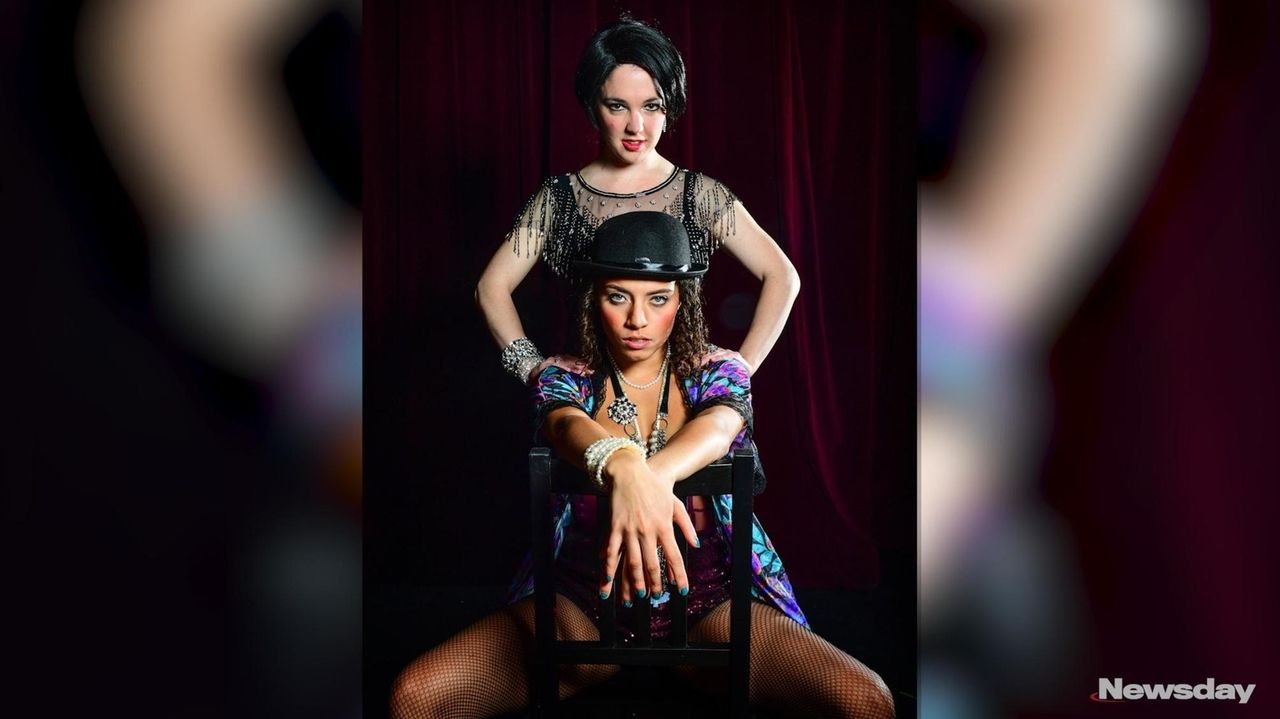 "Cabaret" is being performed in two locations on Long Island this year. On Tuesday, April 17, the two women playing Sally Bowles, made famous in the 1972 film by Liza Minelli, Angelica Adams from the Merrick Theatre and Center for the Arts, and Nicole Intravia from the Broadhollow Theater Company, took a moment from rehearsals to strut their stuff. Credit: Newsday / Thomas A. Ferrara

Life is a “Cabaret,” times two, this weekend with regional theater productions of the classic musical set during 1930s Nazi Germany running concurrently at Merrick Theatre & Center for the Arts and the Bayway Arts Center in East Islip.

For the two actresses who will sally forth as Sally Bowles, the free-spirited chanteuse who belts out showstopping numbers in and around the Kit Kat Club, the show’s titular cabaret, it will be a challenge to make audiences forget Liza Minnelli’s Academy Award-winning turn in the 1972 film adaptation. Here’s how each intends to put her own spin on the role.

When did you make your stage debut?

I was 4 and I sang the “Mickey Mouse Club” theme song for a nursery school graduation.

What other roles have you played on Long Island?

I’m most known for playing Mimi in “Rent” in 2012 at Plaza Theatrical Productions in Lynbrook.

How does a Long Islander get into the character of a quirky 1930s Berlin cabaret performer?

I’m actually pulling a lot from my own life. I traveled through England for three months in college and I went to Germany and Paris.

How does it feel performing in Liza Minnelli’s shadow?

I don’t think I’m anything like Liza Minnelli. Musical theater is a personal art, and Sally Bowles can be played by Liza Minnelli and by a 23-year-old multiracial Long Islander like me.

What is your favorite number from the show?

“Mein Herr.” She [Sally] had just been fired and there’s a fire inside her at that moment that really shows through.

How does playing Sally take you out of your comfort zone?

The hardest part for me is her abortion and her decision to stay at the cabaret and choose a fantasy over real life. I feel like it’s the farthest from my life.

What is your musical dream role?

What other parts have you played on Long Island?

Claudia, Guido’s muse in “Nine” at Broadhollow in 2012, and Jeannie in “Fat Pig” last year at Carriage House Players.

How did you get inside Sally’s head?

As an actor we become used to following our impulses and being uninhibited and putting yourself out there. I also spent a few years working at a bar in Times Square, and some of the experiences there were educational.

How do you intend to make the character your own?

I read an article recently that Sally is supposed to be untalented and flighty, and I kind of disagree with that. I’m trying to take it back to that classic Sally. She knows who she is, and there’s an innocence there.

What’s your most challenging song in the show?

My real life fiance, Tom Brown, is playing Cliff, Sally’s love interest, so getting to sing “Maybe This Time” to him makes me cry. It’s hard to get through it, looking at him and singing about this thing that everybody faces, will I find someone?

How does the story of “Cabaret” resonate with contemporary audiences?

The basic idea of the show is, is it better to pay attention to what’s going on and be involved, or should you just try to enjoy life while you’re here? And I think that’s an eternal theme.

What is your dream role in a musical?

Lucy, the prostitute in “Jekyll & Hyde” who gets killed by Hyde. She’s got some great numbers, such as “Bring on the Men.”