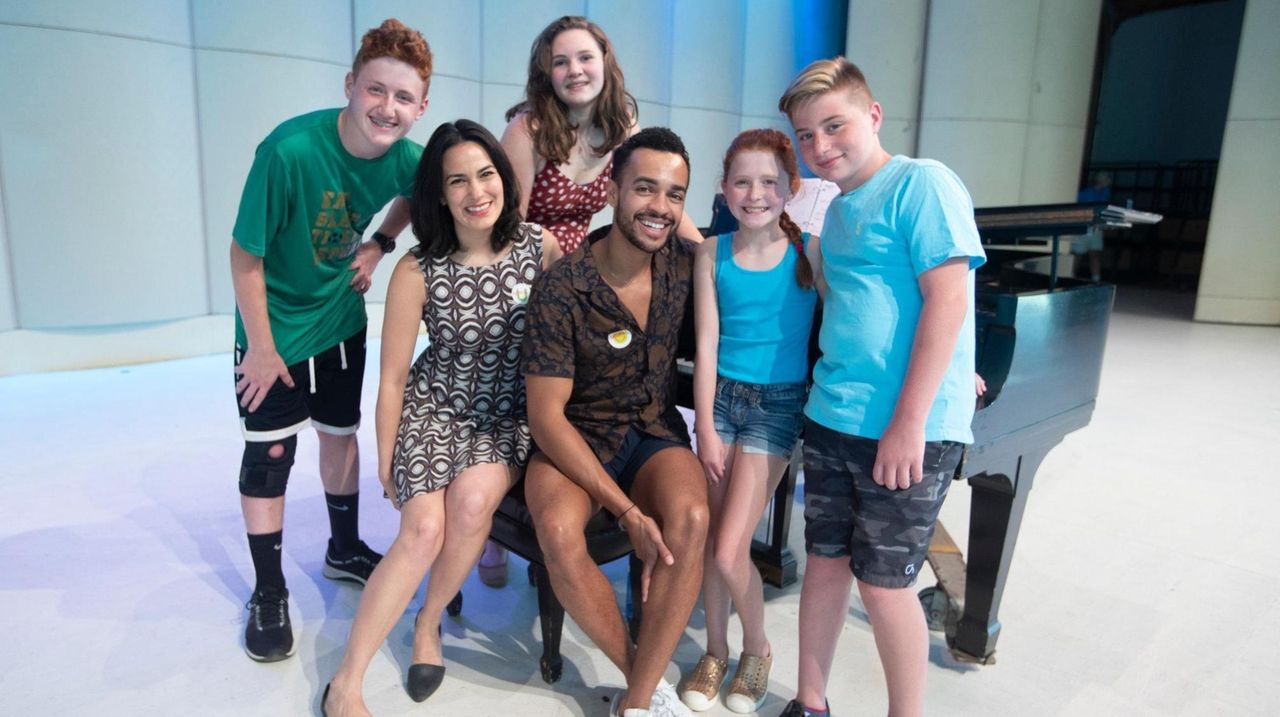 Noah J. Ricketts and Alyssa Fox of Broadway's "Frozen" visited Usdan Summer Camp for the Arts in Wheatley Heights on Monday, where they met the young actors who will take on their roles in camp productions. Credit: Randee Daddona

Kristoff, meet Kristoff. Elsa, Elsa. Two stars of Broadway's "Frozen" visited Usdan Summer Camp for the Arts Monday in Wheatley Heights, where they met the young actors who will take on their roles in camp productions.

Noah J. Ricketts, Broadway's Kristoff, and Alyssa Fox, the Elsa standby, entertained the campers with a short concert of hits from "Wicked," "Waitress," "Hamilton" and "Frozen." Accompanying them was Long Islander Mat Eisenstein, the show's assistant conductor and keyboard player who is a Usdan alum (along with Natalie Portman, Mariah Carey and Seth Rudetsky, to name a few). Though it was their one day off for the week, they stayed around for a talkback with the two casts who will do "Frozen Jr." at the camp next week, answering questions about every aspect of their road to Broadway.

Ricketts told the campers about his seven auditions before landing a role and shared a story about getting the theater bug when he broke his wrist and his parents sent him to Broadway Boot Camp. "It feels pretty amazing to give back to these young people," he said, offering some advice to the young Kristoffs: Maxwell Friedman, 15, of Commack, and Nicholas Spataro, 11, of Hicksville. "Make sure you have a whole lot of heart," he told them. "Kristoff has a tough exterior on the outside, but his interior is filled with love."

Discussing the challenges she's faced, Fox talked about the travails of being a standby, especially having to go on mid-show as she's done several times, including once when she had six minutes from being summoned from her dressing room (Caissie Levy had taken ill) to singing "Let It Go." Fox, who's been with the show since the Denver tryouts, urged the young Elsas — Emma Butler, 15, of East Patchogue, and Mae Curiale, 11, of Sea Cliff — to focus on the relationship with their character's sister, Anna. "Really concentrate on the connection of the sisters," she said, "there's a strong bond there and that's what the show is all about." Love, she said, "doesn't have to be romantic love."

As for general theatrical advice, Ricketts warned that it's a long road. "The fun is in the journey," he said. "Don't expect the end result right away."