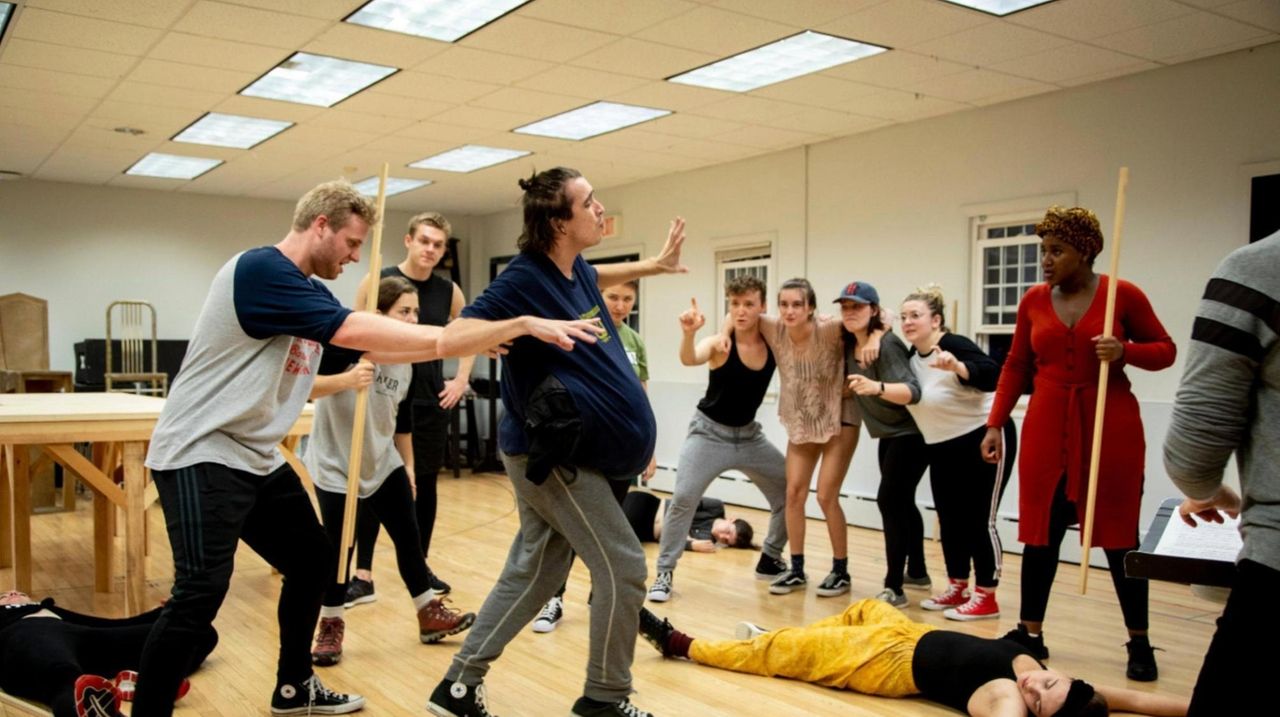 Less concerned with the bottom line at the box office, some local universities are taking chances on offbeat plays. On Tuesday, Sept. 25, LIU Post staff spoke about the play they're working on, "Ubu Roi." And on Wednesday, Sept. 26, JJ O'Neill talked about the play he's directing at Adelphi, "Anton in Show Business." Credit: Newsday / Yeong-Ung Yang

Sometimes another production of "Annie" or "The Odd Couple" just doesn't cut it. But it's easy to expand your theatrical horizons. Several intriguing, out-of-the box productions are running in the next couple of weeks at local universities, with gentle ticket prices and performances from talented young actors who could very well be on Broadway in a few years.

University theater departments can take risks that more commercial theaters wouldn't dare, in part "because we are not tied by the restraints of the industry in terms of commercial viability," says Maria Porter, director of undergraduate studies at LIU Post in Greenvale, where the drama department's production of "Ubu Roi" runs Oct. 5 to 14.  "It's incumbent upon universities to take those risks and do productions that wouldn't be done in a commercial arena," Porter says.

The work by Alfred Jarry, first performed in Paris in 1896, is a "precursor to absurdist theater," says Melanie Armer, the New York professional who's directing the show. She describes the five-act comedy as a simple story of a man who wants to become king, murders to make that happen, gets tired of it all and moves on. It's timely, she says, especially considering Jarry's exploration of fascism. "We are in a place in our current political climate where fascism is in question again," she says, adding that the play deals with issues that "students are grappling with as they come of age and begin to participate in elections," as well as "what it means to take leadership, what it means to be part of a community."

Timeliness and a balance are among the factors university theater faculties consider when creating a season. Of course "we think about what people are going to want to see," says Royston Coppenger, theater department chair at Hofstra University in Hempstead. But at every school educating the students gets top billing. Over the four years, a student will be in the program, says Coppenger, "we try to present as many different kinds of drama as we can." Still he says, everyone in the department has "our favorite obscure play that we would love to see done," which brings us to "Dream of Common Language," running Oct. 5 to 14.

The relatively contemporary piece, written in the early 1990s by Heather McDonald, is of the moment in that it "grapples with the issue of women in art by telling the story of a group of painters in the 19th century," explains Coppenger. "The men are getting all the attention and the women, who are equally talented and motivated, are relegated to the roles of wives and lovers." Timely, yes, says Coppenger, but it also has characters that are age appropriate for the students, useful "because that's what they'll be auditioning for once they get out of college.''

Playing to the strengths of the students is also a consideration, one reason the theater department at Adelphi University in Garden City is doing "Anton in Show Business," running Oct. 2 to 7. Department chair Nicholas Petron is frank: The play "has a lot of women, and we have a lot of women in our department, as many theater departments do." Still, he notes a different kind or relevance. "Given the current political turmoil," he says, "we thought it might be interesting to start with a raucous comedy."

The play, written by Jane Martin and first performed in 2000 at the Humana Festival in Louisville, Kentucky, ''just struck a nerve," says Petron. It's about a bunch of professional actors doing Chekhov in Texas, "so you have a collision of realities there," he says. "It pokes great fun at the theater and film and television."

On a deeper level, though, Petron notes that a university theater department has the responsibility to "address issues that provoke discussion and hopefully change the minds of some people  . . . part of our mission is to inform and educate." But, he adds, we also strive to entertain, and an academic institution has great freedom in that regard. Being at a university, "we do not have the pressure to make every show a sellout."

Dream of a Common Language