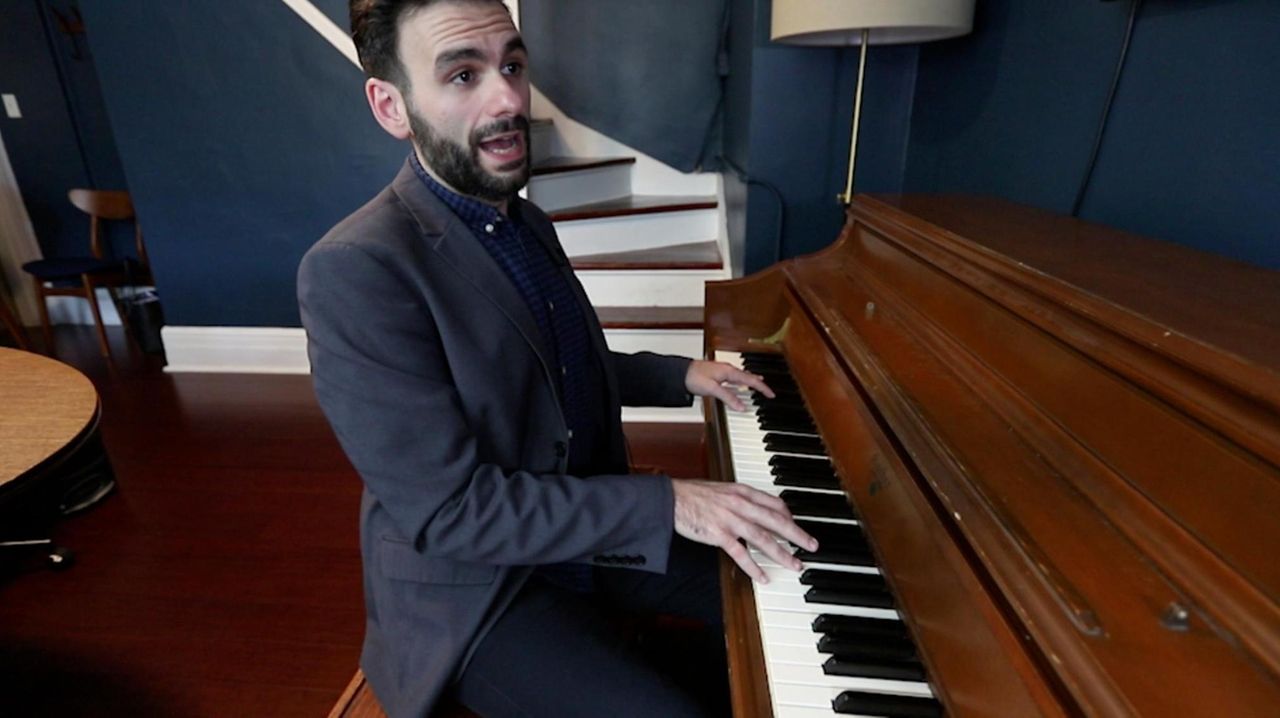 Make way for another piano man, Long Island. That would be Joe Iconis, the songwriter and social-media star of “Be More Chill” fame, who is never happier than when he’s sitting at a piano -- composing, performing or just ruminating on what has brought him to this place.

The Garden City native, who describes himself as a “musical theater nerd,” has long said he turned to songwriting because he was terrified of being on stage. Still, since the sixth grade he wanted to be a Broadway composer, which he became earlier this year when “Chill” opened at the Lyceum Theatre. Now, as that show nears what its fanatical fans consider an extraordinarily premature closing date on Aug. 11, Iconis has just opened a new show, “Broadway Bounty Hunter,” off-Broadway at the Greenwich House Theater.

It’s a radical departure from the youth-oriented “Chill,” which focuses on a teenage misfit who thinks a pill containing a Japanese supercomputer will make him popular. “Bounty Hunter” goes in an entirely different direction, says Iconis, speaking in the theater lobby on the afternoon of the first preview. It’s about a musical theater actress in her 60s, a “woman of a certain age” (T-shirts printed with the slogan are sure to be hot sellers), down on her luck and feeling the results of a sexist, ageist society. She can’t get a job, is about to be thrown out of her apartment and is grieving for her ex-husband.

While “they couldn’t be more different on paper,” Iconis says, at the heart of both shows is “a celebration of people who feel marginalized, who feel different, people who feel society is not giving them their due.“ The shows, he says, try to “elevate the stories of people who aren’t normally the subjects of big musical comedies.”

Iconis and his writing partners, Jason SweetTooth Williams and Lance Rubin, wrote the show for Annie Golden, an actress they’ve worked with for years, who also plays the mostly mute Norma in “Orange Is the New Black." Through a series of events, the character (named Annie Golden, of all things) gets wrapped up in the world of bounty hunting, ending up in South America on the trail of a drug lord. “The whole thing is told in the style of exploitation, martial arts films of the '70s,” says Iconis,  “so it has this sort of soul-funk, R&B vibe.”

“It just doesn’t sound like anything else. It’s a completely original musical,” says lead producer Jennifer Tepper, who’s been working with Iconis since discovering his music while doing an internship at New York University. “I thought it was the best thing I’d ever heard.”

She’s participated in every Iconis show since 2009, caught up in what he lovingly calls his family. “He surrounds himself with artists that create this fabric together,” says Tepper, adding that it is a large part of what captured “Be More Chill” fans. “It was the energy of people who worked together for so long.”

For her part, Golden is embracing this leading role, though at a June media event she quickly acknowledged she is more about “process than promotion.” Having worked with Iconis since 2005, when she performed in his NYU thesis musical “The Black Suits,” Golden says what makes the songwriter special is that he “knows whose shoulders he stands upon.” He’s done his research, she says, noting that back in the day, composers like Rodgers and Hammerstein and Cole Porter wrote shows for specific actors. “He honors that legacy,” says Golden.

It’s one he’s been devoted to since he was a child, says his mother, Lucille Iconis, of Garden City, recalling how a piano inherited from her parents set the young Joe on his chosen path. “He always loved anything to do with musical theater,” she says. “He’d see shows and talk about the scenery, the lights, things kids wouldn’t talk about.” Now, she’s in awe of her son’s success. “I’m just so proud of his determination, his grit.”

As superintendent of the Massapequa Schools, Lucille Iconis has seen firsthand how “Be More Chill” speaks to young people. “It’s such a powerful message,” she says about the show, which earned her son his first Tony nomination for the score. “All of us have felt out of place in middle school, high school. He’s given voice and credibility to these things.”

Joe’s dad, Arthur Iconis, reveals that he often stands incognito outside the Lyceum stage door and talks to parents about what the show means to their kids. “It’s been such a long road, and he’s worked so hard to get to where he is,” says the proud dad. “It’s very gratifying to see the accolades come his way.”

And they are not likely to stop. Iconis has two more shows in the pipeline. He’s been working for years on “The Untitled, Unauthorized Hunter S. Thompson Musical,” about the complicated writer who Iconis says helped invent “gonzo journalism,” noting we still feel its ramifications today. “I don’t think there’d be Twitter without Hunter S. Thompson,” he says, adding that the show may find a home on the West Coast in the near future. There’s also “Love and Hate Nation,” a romance about two girls in a juvie hall that’s set to play Two River Theater in Red Bank, New Jersey (where “Chill” got its start) this fall.

Along the way, Iconis has gotten more comfortable with his public persona. He’s a social media superstar (if you want to upgrade your Twitter presence, post a photo of Iconis and watch your followers skyrocket). He regularly sits at the piano to perform a cabaret act called “Joe Iconis and Family” at places like Feinstein's/54 Below, where on a late May night colleagues Krysta Rodriquez, George Salazar and Golden joined him to perform songs from upcoming shows, along with delightful numbers like “The Whiskey Song” and “Velociraptor.”

And lately, as “Chill” winds down, he’s instigated Wednesday evening events called “The Post Show Hang,” when he drags his keyboard onstage at the Lyceum and appears to be having the time of his life playing for guest performers that have included Telly Leung, Taylor Trensch, Alice Ripley and the original cast of “Black Suits.” “We started it because we wanted something that would kind of keep the show in the conversation," he says, "and it’s done that and then some.”

Which makes you wonder if Iconis is still quite so terrified of performing. He hedges the question, saying only that it started as a necessity. “I had songs and I wanted people to hear them . . . I just kind of forced myself to do it.” Confessing to rock star fantasies, he still says he’s more of “made entertainer” than a “born entertainer.”

Will we ever see him in one of his own musicals? Could happen, he says, but it would have to involve the piano. “I don’t think I’m very good if I don’t have the piano to use as a performance enhancer.”

“I’ve been a fan of Annie Golden since I was a kid,” says Joe Iconis, but he skipped sending flowers. Instead, he wrote her a musical.

“She’s my favorite type of actress,” he says of the woman on whose shoulders rests his latest work “Broadway Bounty Hunter.” “There’s no putting her in a box — she’s a singer, she’s a rocker, she’s an actor . . . she’s kind of done it all.”

Golden, who says the show “makes me feel forever young,” happily fesses up to her rocker roots (she calls herself a “downtown diva”), but she leaves it to Iconis to get more specific about her resume. He first became aware of her, he remembers, listening to the cast album of Stephen Sondheim’s “Assassins” (she played Squeaky Fromme). The more I got into musical theater, he says, "the more I kept picking out these amazing Annie Golden performances.” He was especially drawn to her portrayal of Audrey in “Little Shop of Horrors,” the first show he ever saw and still one of his faves. She was the last Audrey that Howard Ashman ever put in to the show, he explains, “so that became a huge inspiration for me.”

She’s had a wild career, says Iconis, from the time she was lead singer for the '70s punk band The Shirts. Milos Forman discovered her singing at CBGB and cast her in the 1979 movie “Hair,” which, says Iconis, “is how she got into acting in the first place.”

The first Iconis work Golden performed in was “Black Suits,” the musical he wrote as his thesis project at NYU (which, no surprise, had a part he considered perfect for Golden). He shared that with the casting director and, serendipity, she happened to know Golden. After hearing some of the songs, Golden agreed to do the show. The two have been working together ever since.

But now the pressure’s on, with Golden having to carry this new work by someone she clearly holds dear. “To sing Joe Iconis’ music, that’s a challenge,” she says. “You better rise to the occasion.”