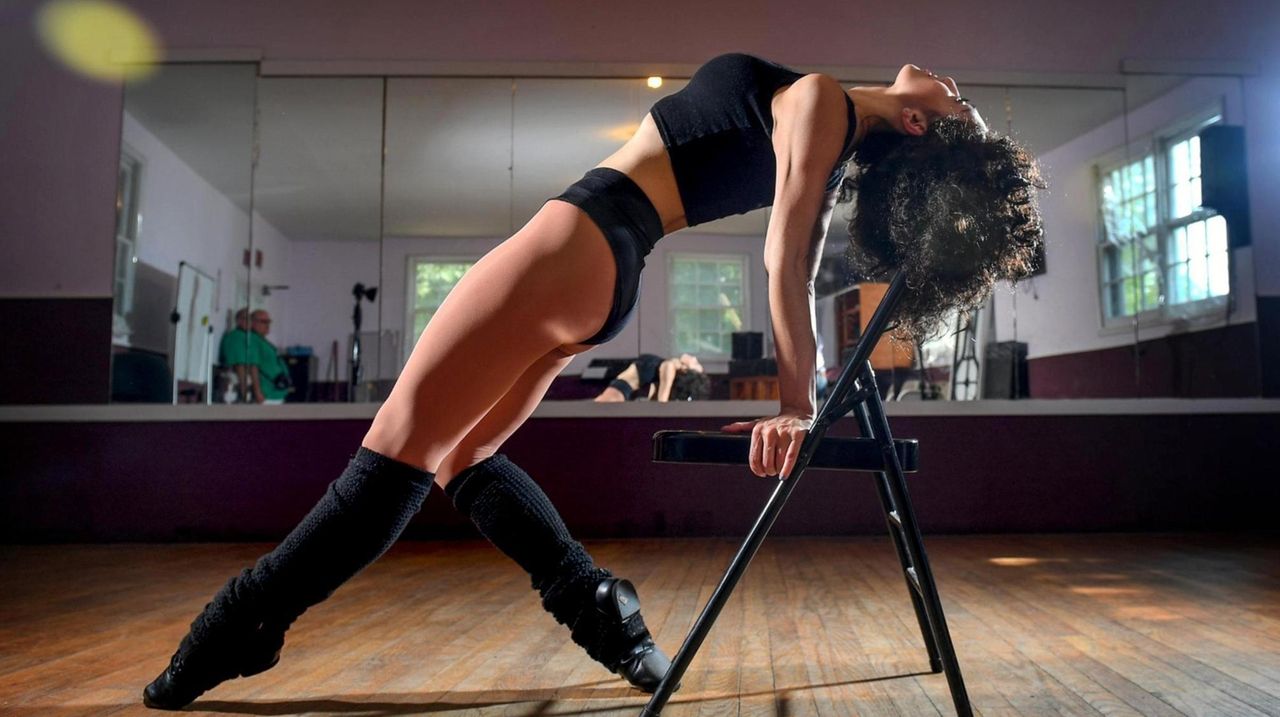 Julia Macchio, the 26-year-old daughter of "Karate Kid" Ralph Macchio, rehearsed Wednesday for her role as Alex in Gateway's production of "Flashdance -- The Musical," to be staged at the Patchogue Theatre, Aug. 29-Sept. 15, 2018. Credit: Newsday / David J. Criblez

For actress Julia Macchio returning to the Patchogue Theatre to star in Gateway Playhouse’s  stage version of the hit 1983 film “Flashdance” can be summed up in a song title — “What a Feeling.” The 26-year-old, who grew up in Suffolk County, performed there as a child in dance competitions via the Long Island Academy of Dance.

“I’m Long Island born and raised. This has always been my home,” she says. “Walking onto that stage as a professional is unreal.”

As the daughter of actor Ralph Macchio (“The Karate Kid”), she is no stranger to ’80s nostalgia.

“People come to see a show like this because they love the movie and simply want to relive that ’80s feeling,” she says. “They want the leg warmers, the punch-kicks and to hear the songs they know. You have to give that to them, but also find new things to keep it fresh.”

This is not Macchio’s first time performing the role of Alex Owens in “Flashdance.” She did a national tour of the show from the fall of 2015 to the spring of 2016.

“It was my first lead role out of college,” she says. “My first thought was, ‘Oh my God, I hope I can still do it.’ It’s so demanding because I’m singing, dancing and acting for two and a half hours. But it’s my dream role so it’s really a blessing.”

Welding by day and dancing by night, the character of Pittsburgh steel mill worker Alex Owens was ahead of her time in 1983 as a strong, independent woman, something Macchio can identify with today.

“She doesn’t get anything handed to her and she knows what she wants,” she says. “I find the role to be even more relevant now than it was 35 years ago.”

In a pinnacle moment, Macchio dances to the hit song “Maniac” and then re-creates  the infamous waterdrop scene.

“It’s something I have to brace myself for but knowing people are going to love it makes it worthwhile,” she says. “There’s no energy like nostalgic energy and you feed off of that.”

Since she was little, Macchio wanted to follow in her father’s footsteps.

“I’d act out Disney movies in my house playing all the parts, doing costume changes in between the scenes,” she says. “When I realized I could act for a living, that was it for me.”

However, being a celebrity’s kid can be a stigma when trying to get work in the same industry.

“In some ways it’s led me to certain connections that I might not have had. But I do think it might close a couple of doors or make people think of a certain stereotype,” she says. “I’ve stopped trying to change people’s opinions. I just focus on putting my best work out there.”

Despite her father’s success in Hollywood, the Macchio family set roots on Long Island, which began when Ralph was raised in Dix Hills.

“My dad has kind of kept one foot in and one foot out of Hollywood. He’s a father first and has always made that a priority,” she says. “It didn’t feel like we were this Hollywood family. I’d come home and have to take out the trash. We’re so incredibly normal and I’m thankful for that.”

The coincidence that she is playing an iconic ‘80s role and her father is best known for an ’80s character Daniel LaRusso from “The Karate Kid” is not lost on Macchio.

Due to her age, Macchio never got to experience her father’s “Karate Kid” fame firsthand. However, the hit YouTube series “Cobra Kai” has put Papa Ralph back in the spotlight.

“To experience that resurgence of fandom is both interesting and bizarre,” she says. “People come up to him all the time and they are usually very respectful. It’s something I’ve gotten used to from a young age.”