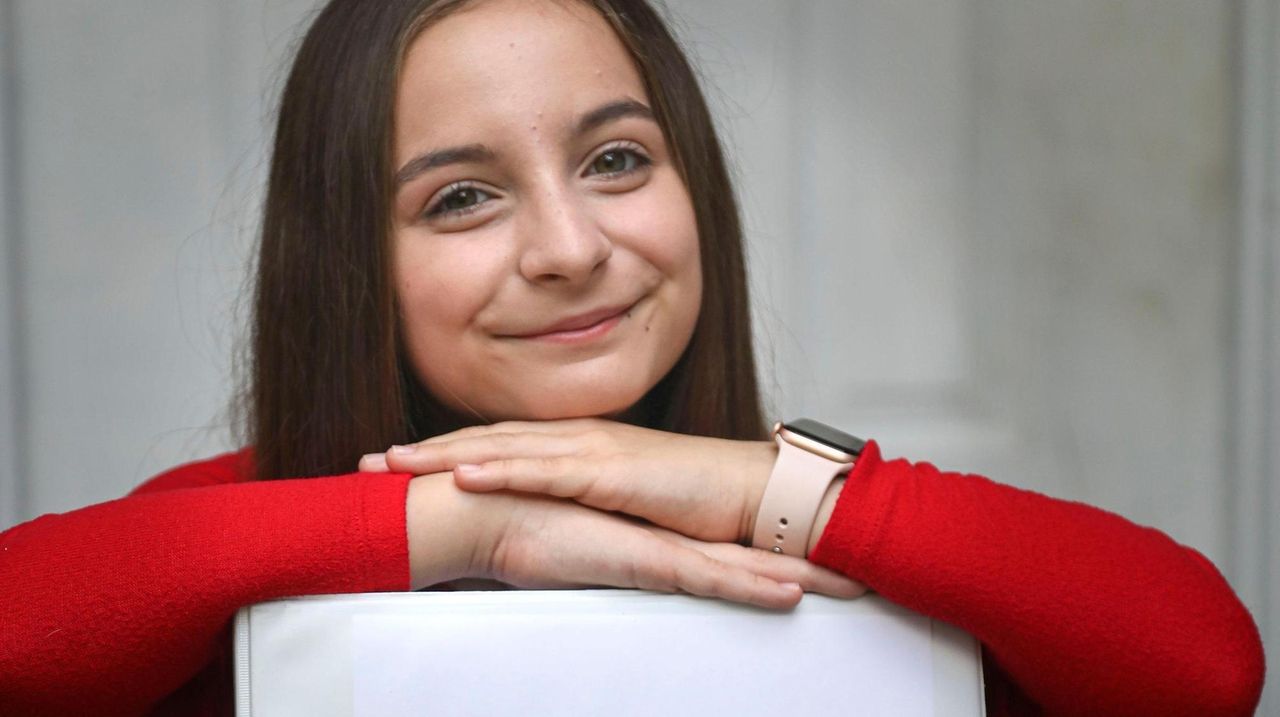 When the Pandemic caused a shutdown within the world of theatre, children who were auditioning for roles, lost their chance, Newsday's Marissa Sarbak reports. Credit: Newsday / John Paraskevas; Kendall Rodriguez

The bag of candy sits untouched in a dressing room at the Stephen Sondheim Theatre in Manhattan.

It has been there since March 12, 2020, the property of Lily Tamburo, 10, a young actress from East Setauket who had a role in "Mrs. Doubtfire," the musical based on the hit 1993 movie that managed to get in three previews before the COVID-19 pandemic shut Broadway down. She’d like her candy back, but it’s complicated. While most young people wait for years for their theatrical dreams to be fulfilled, Lily made it to Broadway at a very young age. She was the understudy for the leading role of Natalie Hillard in the production, and had a small part in the ensemble. But when it all came crashing to a halt, she could do nothing but wait.

The pandemic was tough on actors everywhere, but for young performers, the challenges were multiplied. To state the obvious, kids grow. Someone who looked age-appropriate 18 months ago could easily have aged out of the role by now. Many did, among them Zachary Podair, 14, of Smithtown, who at 12 was scheduled to make his Off-Broadway debut in the musical "Trevor." But he grew 5 inches and his voice dropped, changes that the production believed made him unsuitable for the role. "It was heartbreaking," says his mother, Kathy Podair.

COVID-related issues also muddied the waters, as Broadway and many other companies required everyone in the cast and crew to be vaccinated, potentially eliminating anyone under 12 for whom the vaccine was not yet available. It was too much for the producers at the John W. Engeman Theater in Northport, which replaced its December run of "The Sound of Music" with "White Christmas" rather than deal with casting all those von Trapp children, starting with Gretl, who is supposed to be 5.

"You can still have an Equity production with children under 12," explained director of production Jennifer Collester, "but the rules are very different … and we couldn’t have a 14-year-old Gretl."

David Levy of Actors Equity confirmed that the union’s safety protocols include provisions for "unvaccinated personnel in the workplace," stiff regulations that include masking, social distancing and strict testing requirements.

Kevin Harrington, producer of the just-opened Plaza’s Broadway Long Island in Elmont, had to deal with similar issues with "South Pacific," which requires two young actors. Before Equity rules were developed to coincide with Broadway’s return, Harrington cast Derek Hough, 12, of Commack, and Claudia Fabella, 11, of Rego Park in the roles, only to be forced to rescind Claudia’s offer when the regulations took effect. More heartbreak for the young actress, who already lost the role once — she was supposed to be in the ultimately canceled production at the Goodspeed Opera House in Connecticut. But this story has a happy ending. Unable to find a 12-year-old who was right for the part, Harrington was granted a concession from Equity allowing Claudia to do the role, though the requirements are tough. Among them, she can only interact with the rest of the cast when on stage, she is not allowed in a communal dressing room and, like the whole cast, she must undergo regular testing.

FROM BROADWAY BACK TO LI

For Lily Tamburo, timing was the issue more than anything else. When the shutdown was first announced, she and her mom, Lauren Zummo, moved back to Long Island from the apartment they’d rented in Manhattan. "It was definitely really sad," said Lily, recalling being told just before the evening’s preview that performances were suspended.

Zummo says they packed and left within a few days after hearing rumors that the city would be locked down with no one allowed to leave. "We packed up and never came back," says Lily, who left her candy stash (a carefully selected mix of goodies like Hershey’s Cookies and Cream and deluxe kisses) because she expected to be back in rehearsal in two weeks "and I knew I would be hungry."

Once it became clear that the shutdown was going to last substantially longer, Lily went back to fifth grade at Setauket Elementary School and mastered the technology to make self-tapes and manage Zoom to audition from home. The theater pro (she’s done three shows at Engeman and played Cindy Lou Who in the national tour of "How the Grinch Stole Christmas!") auditioned for "The Music Man" (via Zoom, so no Hugh Jackman sightings); "The Bedwetter," a new musical based on Sarah Silverman’s memoir, and NBC’s "Annie Live!", all the while uncertain whether she’d be asked back to "Mrs. Doubtfire." Where she’ll finally end up has yet to be determined.

GROWING UP TOO SOON

Despite the long shutdown and growing around four inches, Lily didn’t worry too much about "aging out" of the "Doubtfire" part. "I’m still really short," she says. But many other young actors cast right before the shutdown did grow to the point that their roles were in question. In March 2020 Craig Brown, a 14-year-old from Westbury, was cast to play the youngest member of an anti-Fascist family in Lillian Hellman’s "Watch on the Rhine" for Modern Classics Theatre Company of Long Island in Lindenhurst. At the time, he says, "I was average human height."

Zachary Podair was not so lucky. About six months after performing in the backer’s audition, he was cast as Walter, Trevor’s lifelong friend, in the show based on the Oscar-winning short film. "It was an exciting time," says Kathy Podair, noting there was a lot of buzz about the show, the story of 13-year-old kid confused by his crush on another boy. When he got the part, she says, "it was amazing, life-changing we thought."

But after three weeks of rehearsal, the shutdown hit. Like Lily and her mother, they’d rented an apartment in Manhattan, but moved out once they heard it was becoming difficult to find food. Back in Smithtown, Zachary and the other kids in "Trevor" kept in constant online contact. "We were family," he says.

As the shutdown extended, Kathy and her husband, Seth, recognized that Zachary, also a veteran of several shows at Engeman and now a freshman at Smithtown High School West, might outgrow the role. "We knew it was going to happen and it did," she says. "It was nerve racking. You’re celebrating the fact that your child is growing and thriving … but it’s a double-edged sword. In the theater world you want your kids to stay little because that’s good for booking roles, but in life you want your kids to be healthy and thrive and grow. We tried to make piece with that and really said whatever is going to happen is going to happen. We can’t control any of it."

Eventually, as Kathy Podair tells it, all the teens in the cast got an email from director Marc Bruni letting them know that "as much as they’d love to have everyone back, the show takes place during a specific time in Trevor’s life and we need to reflect that." New auditions were scheduled and in the end only four of the original 13 teens ended up back in the show (previews start on Oct. 25). For Zachary, it’s difficult to discuss. "Disappointing," is about all he can manage.

It’s one of the tough lessons of the theater but it hasn’t slowed Zachary down. He says he’s thinks he might want to focus on film and perhaps modeling rather than stage work. He’s already appeared in the HBO film "Bad Education" and played Andy Garcia’s son in an episode of the Netflix series "Modern Love.’’ He also has a part in the upcoming film "Skelly," starring Brian Cox and Torrey DeVitto.

Lily, too, has many irons in the fire. She recently appeared in "At This Performance," a cabaret featuring Broadway understudies along with actors from "Tina Turner," "Chicago," and others at the Green Room 42 in Manhattan, and is the voice of Dee in the YouTube nursery rhyme series "Dragon Dee." Plus there’s still a chance she’ll get something in the Sarah Silverman musical. And while she says she’s wanted to be an actress since she was 4, she also thinks about becoming a neurosurgeon. Wait, what? She grins and says "I’m a huge Grey’s Anatomy fan."