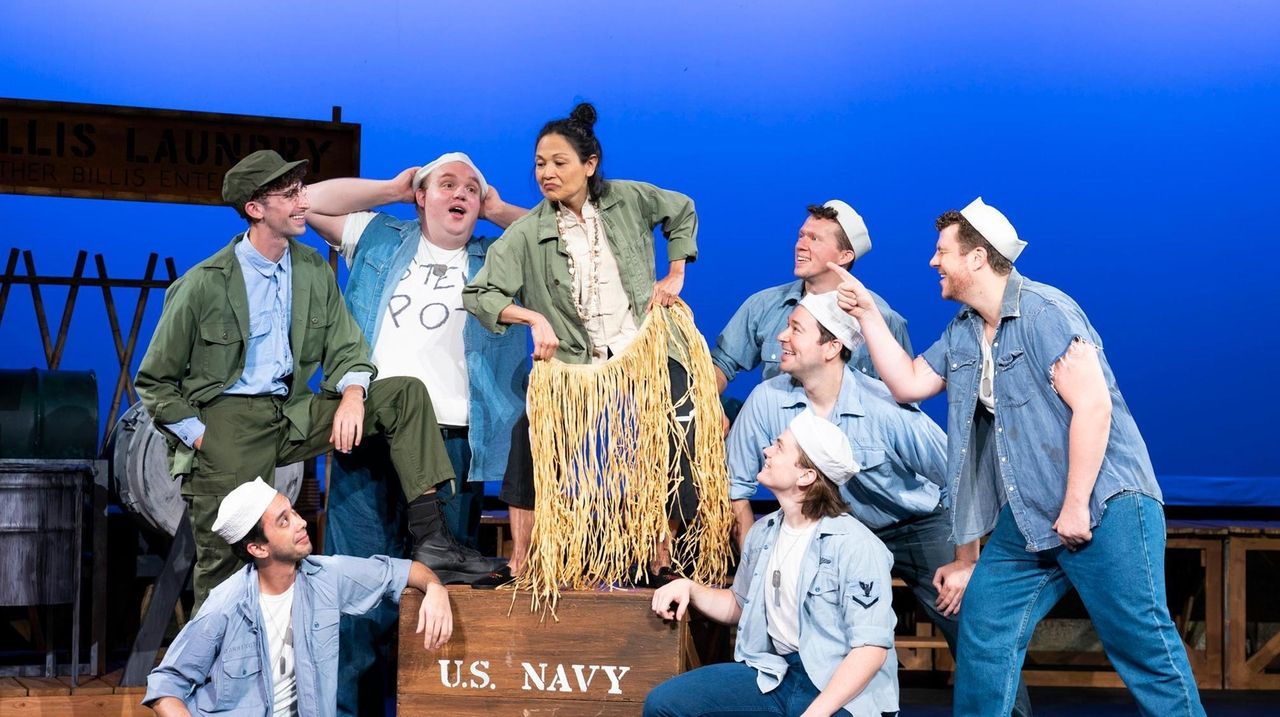 After over a year of shutdowns from the pandemic, Long Island theaters are experiencing a renaissance, with guests eager to return.  Credit: Newsday / Raychel Brightman; Corey Sipkin

For their 1949 smash "South Pacific," Richard Rodgers and Oscar Hammerstein II wrote the delightful "Cockeyed Optimist," in which the leading actress sings of her hope and optimism even in a time of crisis. It’s a song that clearly resonates today, making the show a logical choice to open Nassau County’s new professional theater. Plaza’s Broadway Long lsland debuts Oct. 2 with the show that founder and artistic director Kevin Harrington says is as relevant today as it was more than 70 years ago. But when it comes to such unbridled enthusiasm, Harrington is not alone.

On the heels of the COVID-19 pandemic that shuttered most venues for nearly a year and a half — and despite growing concerns about variants — Long Island theater is experiencing a renaissance of sorts. Along with Plaza’s venture, a new theater will open next year in East Rockaway, a Lindenhurst theater is expanding and opening a long-planned renovation later this fall, and a professional East End company has embarked on an ambitious plan to build a state-of-the-art theater.

Rather than dwelling on what they’ve lost, the people behind these endeavors put a positive spin on their efforts, while making a major commitment to theater on Long Island. "I think the timing was right," says Harrington. "I think people are hungry for entertainment, and though we live in this technology-driven society, people cherish live theater."

David Dubin, artistic director of Manes Studio Theater in Lindenhurst, is on the same page. "I’m hoping because people have been deprived of theater for a year or so, there will be a resurgence and appreciation for it," says Dubin, who hopes to show off a $250,000 renovation of the theater in December. "I guess I’m banking on that, almost literally."

Harrington acknowledges there were times during the pandemic when he wondered if he needed the aggravation. "But this is who I am," he says. "Musical theater is such a large part of my life."

Plaza marks its 40th anniversary next year and Harrington says having a professional theater company has long been a dream. And, he says, "it always struck me strange that there was not one in Nassau County." So when Broadhollow Theater vacated the 400-seat theater at the Elmont Memorial Library, Harrington jumped at the opportunity. "I’ve always set goals for myself … this was the next logical next step for us."

Under a contract with Actors’ Equity, Harrington will be able to present shows using Broadway actors, directors, stage managers and designers. In planning his schedule, Harrington says he looked for shows reflecting his belief that theater is a powerful teaching tool. "Shows have to entertain, yes, but they have to be inspirational, they have to be educational. The musicals that touch my heart are the musicals that have some message to them … something you can apply to your own personal life or to the world around us."

With its underlying issues of war and race, "South Pacific" is especially timely, he says. "There is much to be learned from the characters and their experiences in this musical." The show will have around 20 in the cast and an 18-piece orchestra (conducted by his son, Alex, who is a Broadway musical director). Next on Plaza Broadway’s schedule is "Man of La Mancha," a show Harrington reveres because the title character "transforms the lives of everyone on stage by looking for the good in them." That will be followed next year by two Long Island premieres, "The Color Purple" and "Something Rotten."

Beyond these shows, Plaza will also present "behind the scenes" events for those who want to dig deeper into any given show, as well as road trips to places like the Papermill Playhouse in Millburn, New Jersey or Goodspeed Opera House in East Haddam, Connecticut. Next summer’s plans call for a festival highlighting new musical theater works.

Dubin, too, sees potential as he expands Studio’s footprint. "Quite often in the past I felt like I was dealing with a dying art," he says, "but now that people have been deprived, they realize what they’ve missed." For Studio, that translates to another acquisition from Broadhollow, Bayway Arts Center in East Islip, which after a $75,000 renovation again (including a refurbished lobby and dressing rooms, a new cafe and technical upgrades), opened in May with a robust schedule of musicals and comedies.

Now that Bayway is running, Dubin can focus on the ambitious renovations of the Lindenhurst theater, which involve moving the second-floor theater down to street level (to the relief of audience members who for years had to negotiate a frighteningly steep staircase).

Once Studio gets going (they’ll start with the British farce "See How They Run," which was four days from opening when the pandemic shut it down), Dubin is looking for crossover audiences that will subscribe to both theaters. Studio will present more intimate Off-Broadway type shows, while Bayway, under its own management team, takes one bigger shows that require complicated sets and a bit of distance from the audience.

The reception so far has been great, says Dubin. "The audience feels like we’ve given an upgrade to the quality," and though we raised prices at Bayway, "not one person has complained."

Looking further down the road, Strongbox Theater in East Rockaway is targeting a fall 2022 opening, though owner Tony Leone acknowledges that with such a complicated process — building permits, village approval — "it’s always going to be a moving target." Leone and his wife, Marla D’Urso, bought the former East Rockaway Bank and Trust Company with the idea of turning it into a year-round theater offering everything from concerts and open-mic nights to live theater. Originally scheduled to open this fall, Leone says the acquisition of a building next door has slowed things down, but will ultimately give them more space and allow for better seating, sets and lighting. "It’s going to add so much to the experience," he says, anticipating they will spend around $2 million on the project.

Since announcing the theater last year, Leone says he’s gotten plenty of ideas from people interested in the project, so he’s broadening his thoughts regarding content, including a storytelling night modeled on NPR’s Moth Radio Hour and Tuesday nights with an intellectual focus — think TED-like talks and guest speakers. "My mind keeps on racing," he says. "The building is a blank slate."

Theatrically, he plans to concentrate on straight shows, dramas and comedy, noting that many other theaters are doing musicals. "I’d like to offer up something different."

Locals have already gotten a sneak preview of what Strongbox plans to offer. In July, Strongbox presented "The 39 Steps" for free in East Rockaway’s Memorial Park as a thank you to the community for its support. Despite an opening-night disaster — a thunderstorm stopped the show in Act 2 — Leone says producing that show was illuminating. Drawing around 1,100 people over eight performances, the production was not only a great education, says Leone, but also convinced him how much he loved all this. And he firmly believes they’ll succeed. "You can make money in the arts," he says.

Community bureaucracy has also slowed down Sag Harbor’s Bay Street Theater, which announced plans to construct a new building last October. "I feel like I’m going nowhere fast," says Bay Street executive director Tracy Mitchell, explaining that a moratorium on commercial building in the village has been extended to March 1. That puts the theater in a holding pattern as it awaits new codes and regulations on things like setback and height restrictions, while at the same time dealing with pushback from residents concerned about changes to the village waterfront.

"Change is uncomfortable for many people," says Mitchell, but she anticipates with revisions to the initial design, "people will feel better about it."

Bay Street, like Plaza, was a recipient of a Shuttered Venue Operations Grant, which provided assistance to establishments affected by COVID-19. Though Mitchell doesn’t expect the project will be completed until 2024 or 2025, Mitchell is excited about the potential. Mostly she looks forward to giving their many programs for young performers the ability to operate year-round in the same space as the theater. She also hopes the new building will invite people to, as artistic director Scott Schwartz puts it, "see how the sausage is made." She envisions glass spaces on the first floor where people passing by can watch the creation of sets or costumes. "You never know," she says, "what’s going to strike some kid walking by who might see that and have something sparked in them."

No matter what stage these various projects are in, the people involved are supportive of each other. "I’m thrilled about it," says Leone of Strongbox. "We all have carved out our models, I don’t see myself competing … I think we’re just going to compliment each other."

Bay Street’s Mitchell, too, is rooting for anyone who dreams of producing live theater, adding tt’s not the same audience. "If someone has the desire and wherewithal to make it happen, they should do it," says Mitchell, who sends her best wishes to anyone in this arena. "I hope they do well … more power to everybody."

WHAT IF THE PANDEMIC CAUSES ANOTHER INTERMISSION?

While worrying about building permits and construction delays, the people running local theaters say the pandemic is never far from anyone’s mind.

He says he is asked constantly what might happen if COVID and its variants cause another shutdown. “We have a plan,” he says, explaining that in the event of a shutdown his lease freezes and picks up again when things reopen.

“It’s too soon to know what’s going to happen next season,” says Tracy Mitchell, executive director of Bay Street Theatre in Sag Harbor, which staged Camelot outdoors this summer. “We don’t know if we’re going to be indoors, outdoors, what’s going to happen with COVID, but I’m concerned.” While New York is opening, she says, “we don’t know if people out here will feel comfortable going back indoors.”

David Dubin, artistic director of Manes Studio Theater in Lindenhurst, also recognizes that there are still people “a little reluctant to go into a theater.” But, he says, we adapted before by moving our children’s programs outdoors with almost no advance warning. As to another shutdown, “I don’t want to think about it, but we’ve found our way around things so far.”

On the other hand, Tony Leone of Strongbox sees a bright side. “The pandemic is a horrible thing, but on a business level it presented an opportunity,” he says. “There are no distractions, we’re able to focus on this, we’re able to build.”

Harrington says he likes to think back on the quote from “Don Quixote” that accompanied his high school yearbook photo: “Only he who attempts the absurd is capable of achieving the impossible.”