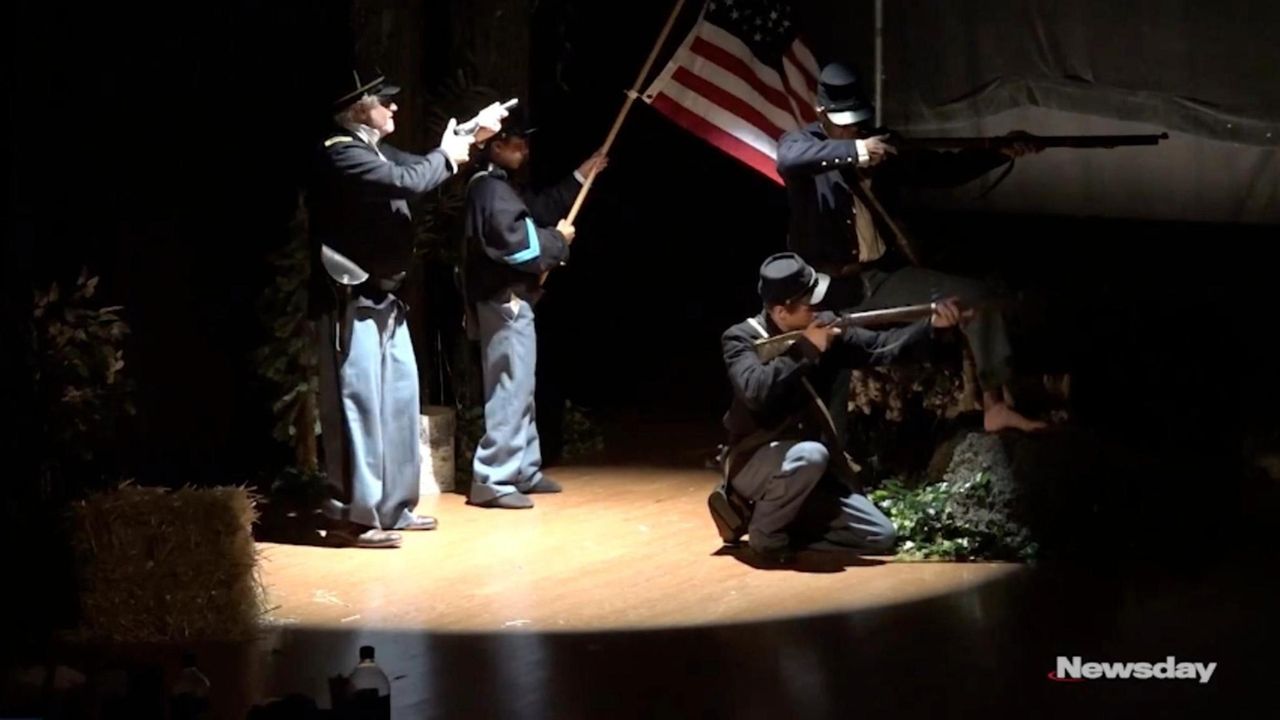 New theater groups are springing up on Long Island, with optimistic founders looking for a niche that will make them stand out in an already crowded field. On Sunday, Oct. 14, Jim Black, director of Phoenix Repertory Theatre Group's "The Prime of Miss Jean Brodie" at the BACCA Arts Center in Lindenhurst spoke about bringing classical, well-known but rarely performed shows back to the Island. And on Monday, Oct. 15, Bonnie Grice, who is the founder of Boots on the Ground, a new company in Southampton that is performing "The Red Badge of Courage," talked about bringing her passion for history to the stage. Credit: Bruce Gilbert, Gordon Grant

William Shakespeare's adage about all the world being a stage has never been more true than it is on Long Island right now. New theater groups are springing up almost as fast as barbecue joints, with optimistic founders looking for a niche that will make them stand out in an already crowded field.

"Our mission is to bring classical, well-known, but rarely performed shows to Long Island," says Jim Black, one of the founders of the Phoenix Repertory Theatre Group, which has been around  since February. He says that he and co-founder Paul Lichtman noticed local theaters were moving away from traditional straight plays, doing more musicals or more modern work, productions done over and over "because people like them."

The group, which operates out of BACCA Arts Center in Lindenhurst, did "The Children's Hour" by Lillian Hellman this past summer and just closed "One Flew Over the Cuckoo's Nest."Next in November is "The Prime of Miss Jean Brodie," selected in part to mark both the 50th anniversary of its debut on Broadway and the 100th birthday of Muriel Spark,  who wrote the novel. The ambitious season of eight shows will also include Eugene O'Neill's epic, Pulitzer Prize-winning "Long Day's Journey Into Night."

History is the lure for Boots on the Ground, a new company in Southampton, where "The Red Badge of Courage" runs through Nov. 4. "I think we're all kind of hungry for history, especially of our country," says Bonnie Grice, the host of NPR's "Eclectic Cafe," who says her passion for the past led to establishing the troupe. Along with plays with historical themes, the group also does re-enactments, including her first project in 2016, a re-enactment of a Victorian funeral with the actors in period mourning garb marching down Main Street carrying a coffin (supposedly that of Victorian-era Southampton resident Cordelia Rogers).

Grice, of Southampton, is most interested in the 19th century, the Victorian and Edwardian eras and says she's intent on maintaining historical accuracy. "I don't want to contemporize, I just want to keep it as historically sound as I can because I think that journey is something we all need … I want to keep it real," she says. Down to their wool socks, she points out, everything the actors are wearing in "Red Badge," an adaptation of the Stephen Crane novel by Virginia playwright Catherine Bush, is "what they would have worn in the Civil War."

There are times, of course, when more basic needs — like raising money — give birth to a theater group. At Maria Regina Roman Catholic Church in Seaford, the Pontieri Players were formed to honor Joe Pontieri, a fixture in the congregation who died last year. It was a true "let's put on a show" moment, says Mike Blangiforti, one of the founders, along with Becky Neuhedel. "We came up with the idea over a year ago that we could pull off a Broadway-style musical," he says, with proceeds used, for starters, to put air conditioning in the auditorium. The first production, "Anything Goes," closes Oct. 21. Blangiforti says the group is talking about more musicals but nothing specific. "I think we have potential."

The competitive nature of all these endeavors is on everyone's mind, even at more established theaters. "It's very hard, even for those of us who have been here a long time," says Jeffrey Sanzel, executive artistic director of Theatre Three, the Port Jefferson company now in its 49th season.  "But you know, when you have a dream . . . how can you argue with that? All the theaters that have been around for awhile started the same way."

While Grice notes that the proliferation of theaters makes it challenging to get actors, "especially male actors," she says audiences have responded well to their offerings, so she plans to just forge ahead. "The older I get, the less competitive I become," she says, and of other companies, "I support them, I love them, I go to them." Phoenix, as well, has been encouraged by audience response. Black notes that increasingly theaters are "becoming more niche. You go to Theater A for their musicals, you go to Theater B for edgy new stuff ... I think we can all coexist."

Sanzel would agree, talking about the offers of help he received from other theaters after a recent flood destroyed many of their props and costumes. "There's a great deal of camaraderie," he says. The Long Island theater community "is a very strong one and a very kind one." So, yes, while there are many, many theaters, he says, "hopefully there's room for all of us."

WHAT "The Prime of Miss Jean Brodie"

WHAT "The Red Badge of Courage"