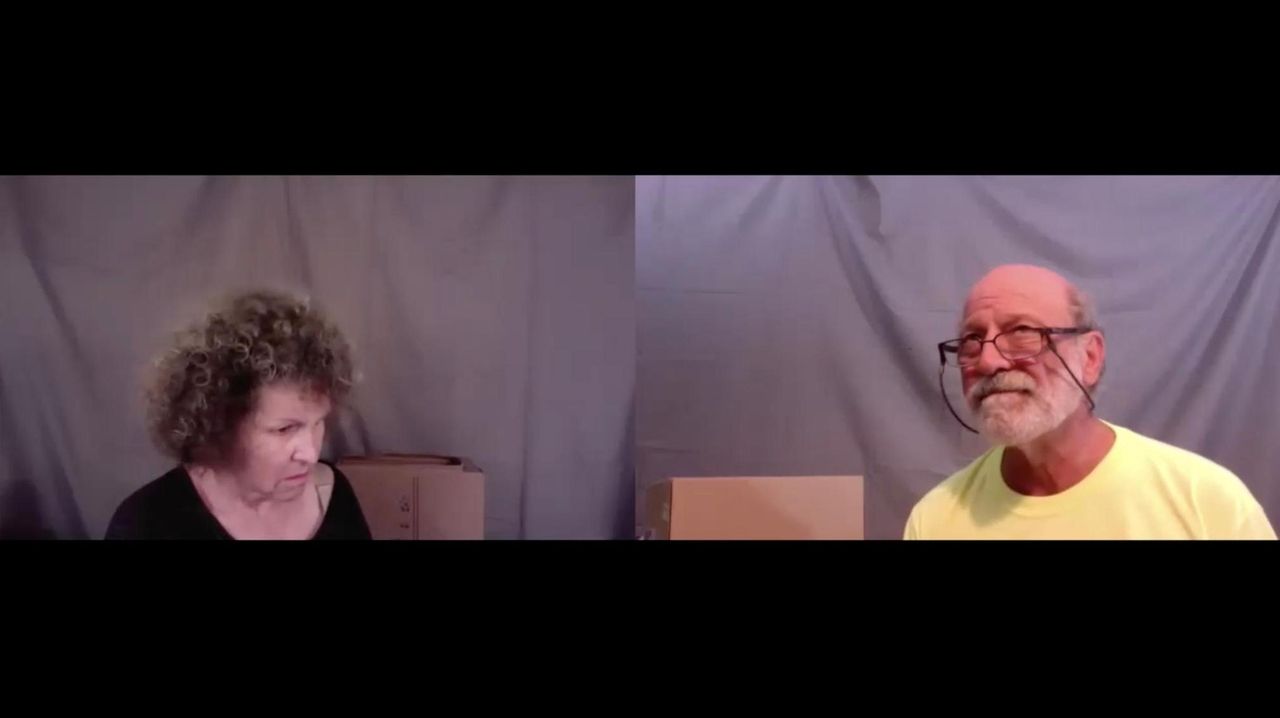 Laurie Atlas and Carl DiModugno perform a scene from “One Small Step,” a play by Tammy Green to be performed in a virtual edition of the Northport One-Act Play Festival. Credit: Tammy Green

"All the world’s a stage," Shakespeare famously wrote in "As You Like It," and the line has never rung truer than now. With the theater world pivoting in the Age of Zoom — and COVID 19 — to online productions, real-life backdrops have become the new norm. Two Long Island one-act play festivals, the long-running Northport showcase and Hicksville newcomer One House One Heart, are bringing local talent from their selected participants’ living rooms to yours.

"Many playwrights are adapting by writing more ‘Zoom-able’ pieces," says Michael Casano, a tech and industrial writing consultant from Greenlawn who has co-produced the Northport festival with Fort Salonga actor, producer and director Jo Ann Katz for 11 years. He made his own contribution, "Waiting for the Sun," about a marriage counselor whose "patients open up an unexpected door to her past," more monitor-friendly by revising the opening so that the characters meet in an online tele-therapy session.

"The rewrite made the play more relatable, since we've all had to make our own life adjustments given the unfortunate reality we are now living in," he says.

A CAKE AND MORE PLAYS WITH LAYERS

The playwrights of Northport's five other featured works (half the usual number), chosen from some 50 national submissions, got creative, too.

"In one, a cake goes back and forth between characters in different Zoom frames so we got two of the same cake to make it look like it was being passed off," Casano explains. In Bruce Menin’s "Luminous," which Katz directed, actors portraying romantically involved fireflies are filmed together — outside, wearing masks.

The purpose of the festival, Katz says, has been to unite the Long Island theater community and to give playwrights the chance to see their plays come off the page. "It’s not easy to develop the arc of the characters in 10 minutes. The writers can hear if the language flows or see if something works or doesn’t work on stage," says Katz, who also started a monthly table reading group which serves as a springboard for the one-act festival.

The fledgling One House One Heart festival evolved from the pandemic-themed Long Island Pause Monologues, the brainchild of Deborah Rupy, former president of Wantagh’s Eastline Theater, and her husband, Chris.

"During the shutdowns, many theater groups have turned to the classics. I love the classics but there wasn’t enough attention being paid to original work," says Rupy, who lives in Hicksville. "Life has changed; there has to be new stories. I thought what a nice pairing it would be to match some original pieces to the performers who suddenly had no outlet for their talents."

William Meurer, an actor from Seaford and participating writer in the Monologue series, shares Rupy’s passion for bringing never-before-seen material to the stage. He approached the couple with the idea of launching a 10-minute play festival on YouTube. After a late August call for submissions posted on Facebook, they received 80 plays from as far as New Zealand and responses from more than 200 people wanting to participate as actors and directors.

"It’s mind-boggling, the reach we got. We didn’t intend it to be worldwide," says Meurer.

"Fish Tank," a play by Aly Kantor, a teacher living in Massapequa Park whose previous writing credits were for elementary-age audiences, counts among the nine works being performed. "Nothing is more exciting than seeing another actor interpreting my words, finding nuances and bringing a piece to life," says Kantor. "It is truly collaborative, and that makes it feel more like ‘real theater’ than some of the other virtual projects I’ve been involved in since the pandemic began."

While the entries will be pretaped, Meurer notes One House One Heart will also include a live awards ceremony on Oct. 18 at 7 p.m. revealing the YouTube audience’s picks in a half-dozen categories.

Although they may fall short on the inherent intimacy of true live performance, the two festivals go far in sustaining Long Island’s theater community.

"We want to keep the passion for creativity going," Casano says. "I am confident people will watch the festival in our virtual forum, and I am confident it will satisfy their craving."

WHAT “One House, One Heart: A Festival of 10-Minute Plays”