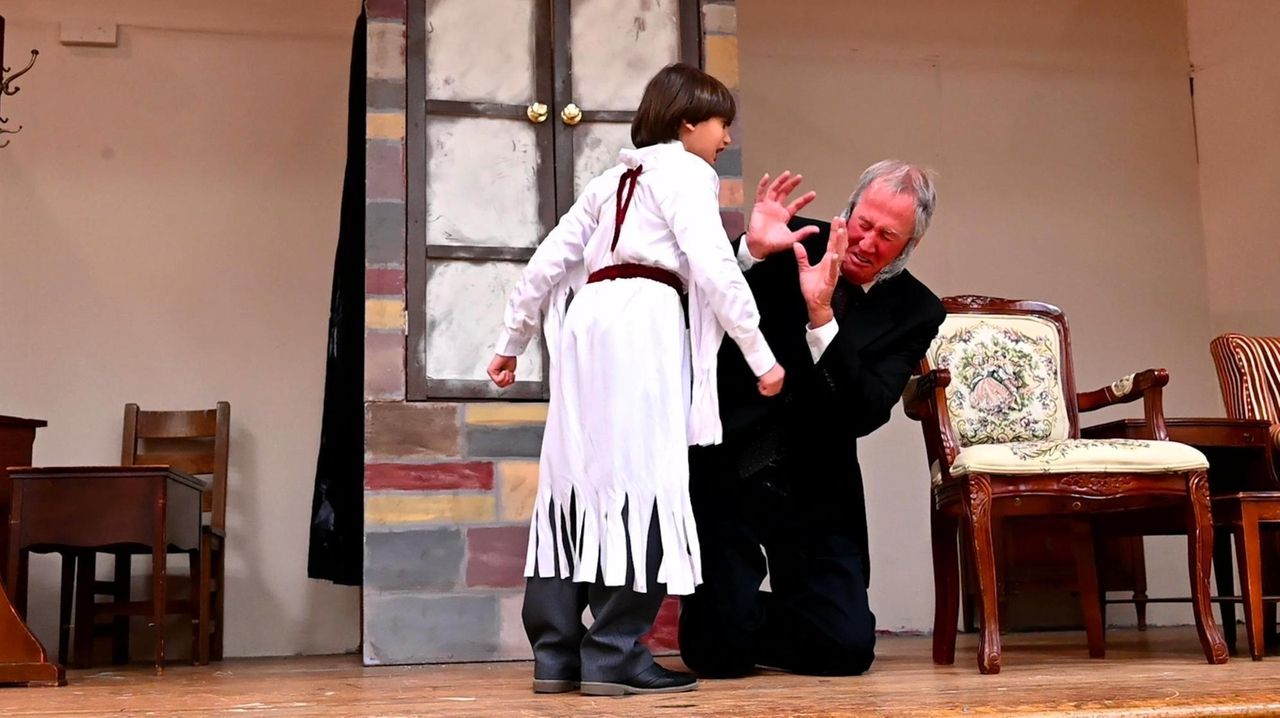 Retired principal Paul Graf, 67, of St. James is starring as Scrooge for the fifth year in a row with the Minstrel Players in Northport. He tells us what joy he gets out of playing the role and what goes into making a good Scrooge. Credit: Newsday / Thomas A. Ferrara

Having someone as genial as Paul Graf play Ebenezer Scrooge may not immediately strike anyone as inspired casting. The retired principal of Smithtown Elementary School not only loves being around children, but he just seems to embrace life. How else to explain his hosting an Australian-themed birthday party for students at his school in which he dressed like Crocodile Dundee and played the didgeridoo?

So tapping his inner Scrooge for one of Northport's holiday perennials — Minstrel Players' production of "A Christmas Carol" at Trinity Episcopal Church from Dec. 13 to 15 — has been a welcome acting stretch. It's also become a tradition for Graf, 67, who is playing the part for the fifth consecutive year. Perhaps the key to Graf's interpretation is his ability to bring a little of himself to the part.

"I think I humanize him," said Graf, who lives in St. James. "Especially in my interactions with the Ghost of Christmas Future, where Scrooge has to confront who he is and how he has been with others. I go from this bluster in the first act and by the end, I try to become more of a spirited, spiritual person."

It's been working for Tricia Ieronimo, who is directing the show, also for the fifth time. "Paul's general love and joy of life and that passion he has for other people helps that turnaround in Scrooge," said Ieronimo of Amityville. "Paul is the first one in any production I’ve seen or been involved with where I really believe Scrooge is going to be successful at the end."

UP FOR THE CHALLENGE

Though Graf had done some acting when he was younger and he was instrumental in setting up a children's theater at Smithtown Elementary, a busy schedule kept him from treading the boards while he was working.

When he retired in 2012 after 28 years as principal, he was ready to take the stage. He attended Minstrel Players' cast call that fall and landed the part of Scrooge's underpaid clerk Bob Cratchit, a role he repeated the next two years. By 2015, he had turned 62 and began to think he was getting a bit long in the tooth for Cratchit. When he asked Ieronimo if he could do another role, she gave him the chance to show his versatility by casting him in several smaller roles.

That Halloween, in a scene that played like something from "42nd Street" (star breaks leg and an unknown goes on at the last minute), Graf was enjoying a bonfire with his family when he got a call from Ieronimo saying the star had to drop out for personal reasons.

"Paul had said he wanted a challenge. So, I said 'How do you feel about playing Scrooge? We already know you can play happy. Let's see how you do with mean,' " Ieronimo said.

An extra challenge was having little more than a month to learn the part. "My belief is that when the universe comes knocking, you say 'yes,' and beautiful things happen," Graf said. "I did my best with it and now I kind of know it. I know the lines and have a feeling for it, and I have more a of a sense of the tone."

A MAN FOR ALL SEASONS

When Graf isn't playing Scrooge, he has several other artistic endeavors that keep him busy throughout the year. He began taking fiddle lessons when he retired and now fiddles around with the Bob Morris Irish Band. He also plays guitar, mandolin and harmonica with the Eagle River Band, an Eagles tribute act; and has played Thomas Jefferson in "1776" for the daytime repertory troupe of Broadhollow Theatre Company.

Artistically, though, playing Scrooge is a whole other experience, one that he looks forward to every year. Before each performance, he and the actor who plays Cratchit have a ritual: They light the candle on Cratchit's desk, summon the spirit of Charles Dickens and ask him to guide them through the show and to share that holiday spirit with the audience.

Graf, who became a grandfather in February — a granddaughter from one child and twins from another were born five days apart — also keeps finding something fresh to bring to Scrooge each year. Sometimes those moments come from Ieronimo.

"The other night we were rehearsing Jacob Marley's death scene," she said. "I told Paul, before the undertaker comes back in, why don’t you sit down in the chair next to Jacob. You normally get up from kneeling next to him and go back to standing there waiting. Take a moment. This man was your best friend and he's now dead."

Also giving Graf a new dynamic to work with is this year's big twist — Tiny Tim will be played by a girl. "The cast keeps changing, so you’re always interacting with different actors," he said. "And there's the sincerity of the children in the play. Some of these performers just light up the stage."

Ultimately, what Graf said keeps him coming back each year is the show's message: "It's all about shedding some light on the meaning of the holidays. That spirit of giving."

And that's no humbug.

WHAT The Minstrel Players presents "A Christmas Carol"