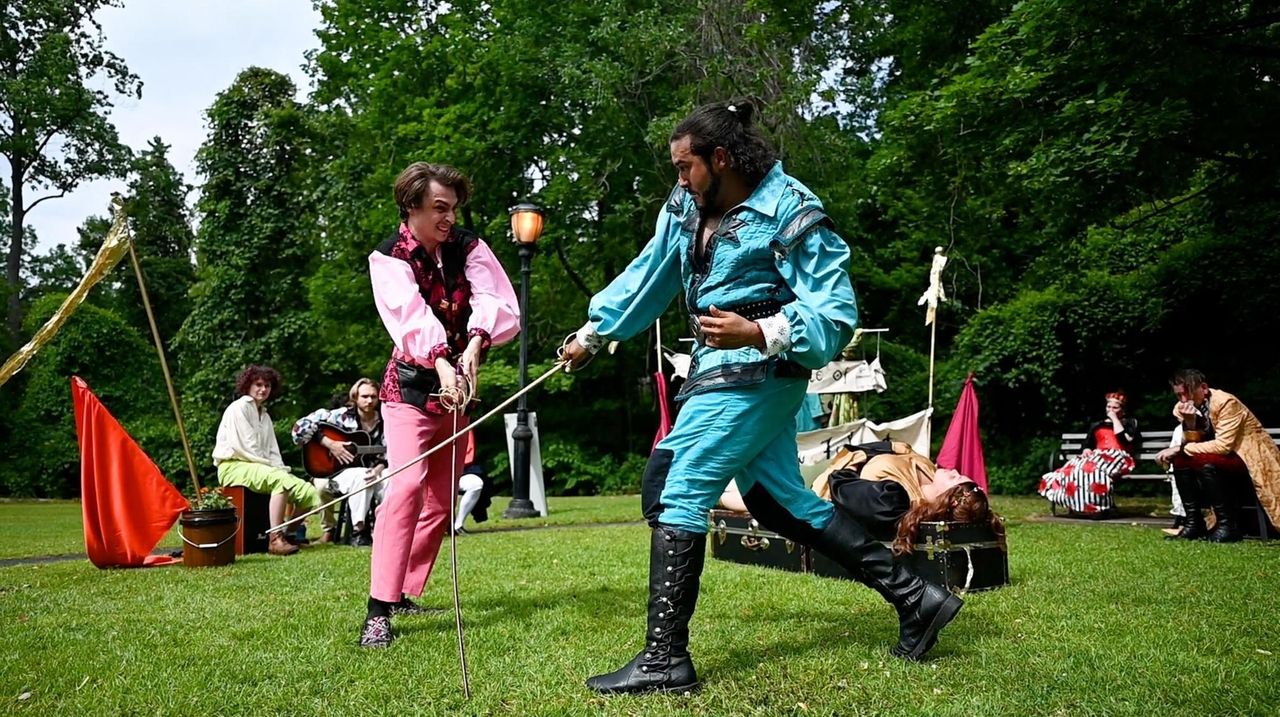 Theater has returned to Long Island this summer, where you can see Shakespeare as you like it in several outdoor productions. Eastline Theatre performs "Romeo and Juliet" at Gerry Park in Roslyn, while South Shore Theatre Experience rehearses "Julius Caesar" in Bay Shore.  Credit: Newsday / Thomas A. Ferrara; Danielle Silverman

A powerful if duplicitous female politician. Chicago gangsters in the 1930s. A besotted young couple dealing with their dysfunctional families. Sounds like the plots of the latest Netflix streamers, right? Wrong. This is all about the venerable works of William Shakespeare.

As theater continues to recover from the pandemic that shut it down for more than a year, several local troupes will present the Long Island version of Shakespeare in the Park, with outdoor productions from Port Washington to the Fire Island Lighthouse. "If New York City can have it, why can’t we?’’ asks Danny Higgins, director of EastLine Theatre’s traveling "Romeo and Juliet," a production he hopes will be "the perfect escape for people who haven’t had theater for 18 months."

Higgins cites COVID-19 as a catalyst for this foray into Shakespeare. "The pandemic made it a necessity," he says, explaining that as the organization’s leaders planned a comeback, they were unsure when or how they’d be able to perform. "We decided to work toward doing something outside and just felt like Shakespeare was the right choice," he says, noting that the Bard worked — and possibly wrote a play — during "one pandemic or another."

EastLine has already performed "Romeo and Juliet" in Freeport and Roslyn, with seven more performances scheduled, including one in Huntington’s Heckscher Park on Sunday. While the production is sticking with the time period set by the author, Higgins says to expect some quirky additions — Juliet wears a mini skirt with bike shorts, the famed balcony scene is done (quite convincingly) on a ladder, and a troupe of musicians warms the audience up with Beatles covers before performing original music during the show. Not, Higgins adds, that any of that changes the tragic outcome.

SEE HER AS CAESAR

Sticking to the original story is important, agrees Remson DeJoseph, who is directing "Julius Caesar" for the South Shore Theatre Experience, opening July 25 in Babylon. But DeJoseph is taking some liberties, giving the show an ‘80s vibe, with music and costumes that reflect the period.

"It’s a fun aesthetic to play with," he says. DeJoseph believes the play is about "creating icons out of politicians," which he says brought to mind the Reagan era — though he stops short of suggesting that Caesar is Reagan.

The point is easily clarified because the title character in this production will be played by a woman. "The idea of Caesar as a woman is very interesting to me," says DeJoseph. "I think this whole gender bending of Shakespeare reveals a lot about our society today."

Sam Everett, the actress playing Caesar, couldn’t agree more. "It’s going to be an interesting dynamic," says Everett, who has previously played men in plays by Shakespeare and Moliere. "I don’t think my gender has anything to do with how I portray the role. I love showing strength in femininity."

For Everett, the biggest challenge is being the lead: "All eyes are on me."

DeJoseph says that the ‘80s setting will help audiences understand the complex plot, one reason perhaps that this play has been tinkered with frequently in recent years. Recall the infamous 2017 production at the Public Theater’s Shakespeare in the Park, which had Caesar portrayed as a Trump look-alike and a bloody assassination scene that caused an outcry from his supporters.

But then Shakespeare often invites creative interpretations. "He’s kind of timeless," says Deborah Cascio Plezia, artistic director of Lindenhurst-based South Shore Theatre Experience. "The stories resonate as much today as they did then," she says, noting that sometimes simply changing the setting draws people in more.

"We’ve got to take liberties, otherwise how can we make it fresh," says playwright Jocelyn Bioh, who is adapting "The Merry Wives of Windsor" for the return of the Public’s event in Manhattan. That production is set in modern-day Harlem, which she feels makes it relevant. Despite changes, she adds, "The play is still the play, the message is the same."

As classical as Shakespeare’s texts are, "they’re also very malleable," says Evan Donnellan, executive director of the Carriage House Players, whose annual Shakespeare Festival — a tradition going back more than 30 years when it was started by Arena Players — is underway at the Vanderbilt Museum in Centerport. "They have such universal themes, you can really place them in any time period," he says, adding "Shakespeare has proved time and time again that it's OK to flex your muscles and play around a little bit."

While the group’s opening production "A Midsummer Night’s Dream" was done traditionally last month, the upcoming "As You Like It" will take place in the English countryside in the 1910s, "Titus Andronicus" will be set in the 1930s with a Chicago gangster feel and "Richard III" will be dark and Gothic — think haunting. "We like to mix it up," says Donnellan.

However they choose to interpret these classical works, everyone is looking forward to performing with loosened health restrictions. With their casts fully vaccinated, all of these groups will allow actors to perform without masks. Since the venues are outside, audiences will still be able to socially distance and wear masks if they choose. All basically agree with Cascio Plezia’s assessment, which is that "audiences should do what they’re comfortable with."

More importantly, all are embracing the idea of returning to the stage. "We need to release the tension we’ve had during the pandemic," says DeJoseph. "We can let this show wash over us and breath once more."

As Higgins puts it, theater is about "community … we’ve just been through a very dark time where we’ve been forced apart." With "Romeo and Juliet," he says, we can "laugh, cry and grieve and find joy in life again. Theater is good medicine."

WHAT “Romeo and Juliet”

THE 'MERRY WIVES' OF SHAKESPEARE

One of New York City’s most beloved cultural events is back this summer after missing a year because of the pandemic, and much has changed.

Specifically, it’s the end of the line at Shakespeare in the Park, meaning the line that often stretched for blocks as patrons tried to score a free ticket for the evening’s performance. This year, tickets will be distributed by a digital lottery operated by Goldstar (see publictheater.org for complete information). And instead of two productions, this season will focus on one 90-minute, no-intermission play that runs through Sept. 18 to allow for the pandemic-related restrictions in audience size, recently increased to 1,468 seats, roughly 80% of the theater’s capacity. (No vaccine verification or testing needed, but masks will be required.)

As for the play, it’s “The Merry Wives of Windsor,” one of Shakespeare’s most lighthearted comedies. Redubbed “Merry Wives," the rollicking adaptation by Jocelyn Bioh (“School Girls; Or the African Mean Girls Play”) is set in modern-day Harlem. “It’s a joyful, raucous play,” says Bioh, who believes the audience will find great humor in the “crazy, kooky, plot.”

More importantly, she says, it’s about community. “We wanted to make a play that centered on Black joy.”