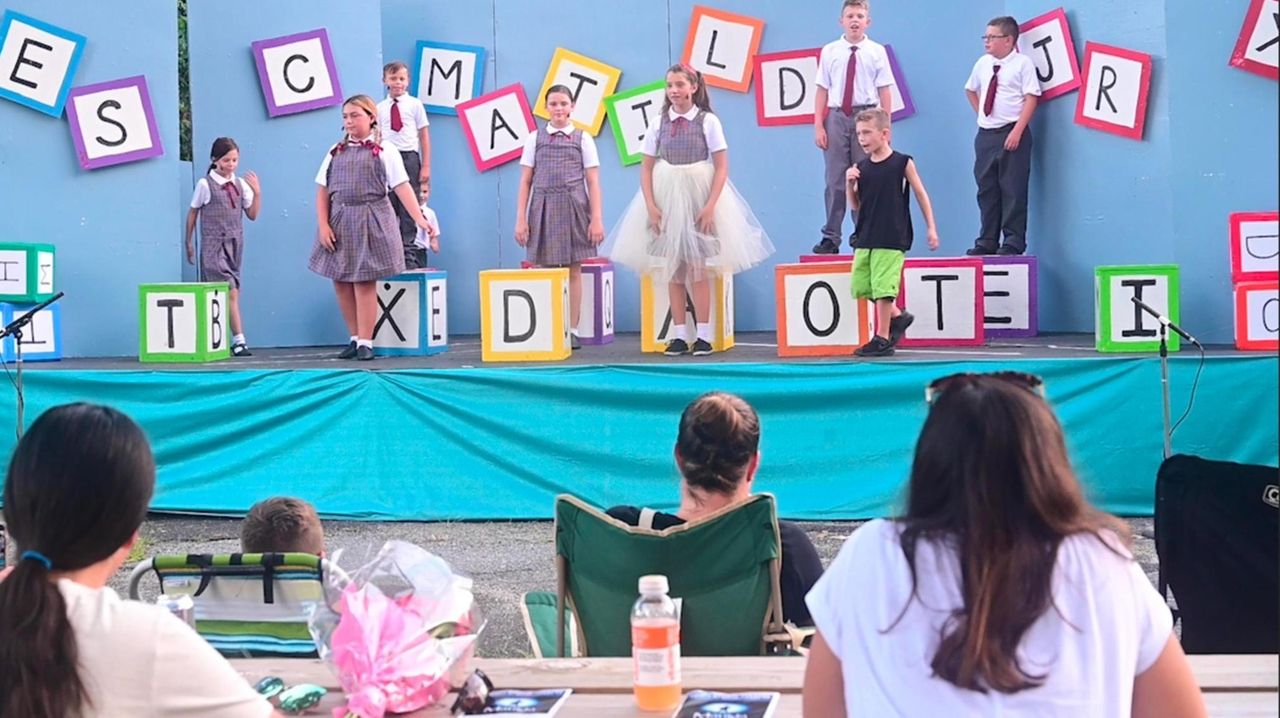 Studio Theater in Lindenhurst is the only LI venue offering live theater this summer, the group will be presenting musicals onstage at Fireman's Memorial Park in Lindenhurst. Credit: Newsday / Thomas A. Ferrara

For the young cast of Studio Theatre of Long Island's "Matilda Jr.," last Thursday's premiere at Fireman's Memorial Park in Lindenhurst was more than just another opening of another show.

To start with, the 18 budding thespians in the Lindenhurst theater's summer camp program are the first — and so far only — performers to be presenting a live stage production on Long Island this summer. Even more rewarding is that they got to do the show in front of an audience, a prospect that didn't seem likely a couple of weeks ago.

"We were planning on doing the show in the theater as part of the phase 4 opening on Long Island," said executive director Chris Rosselli. "Then theaters and gyms were removed from phase 4, so we were left with the dilemma of where we could perform the show."

Rather than just film a performance of the show without an audience at Studio, Rosselli reached out to the Lindenhurst Fire Department and asked if the show could be presented at the Pavilion at Fireman's Memorial Park. The fire department accommodated and now Studio is presenting three other musicals — the spring holdover "Legally Blonde," "Big" and "Moana Jr." — at 7 p.m. Thursdays and Fridays through Aug. 14. In addition, burgers, hot dogs and other food and drinks will be sold.

David Dubin, Studio's executive artistic director, had expected this year to be special for a different reason. "This is our 50th anniversary season. To celebrate, we closed down for six months for a pandemic and now we’re doing a show in a park," he joked. "Thank God for the kids because they've saved us."

The crowd of about 80 on opening night seemed happy to have a night that was all about entertainment. Many came with lawn chairs just as they would for any other outdoor park outing as they enjoyed food from the concession stand and chatted with family members who joined them.

It also became clear immediately that "The Phantom of the Opera" is no longer the only show wear a mask is.  Audience members are required to wear face coverings, while additional social-distancing requirements are being enforced.

"All of the audience members are seated 12 feet apart at picnic tables," Rosselli said. "The children are 20 feet apart from the first row, so there’s no cross contamination."

The cast, of course, is not masked which has been a freeing experience after weeks of rehearsing with masks on, a situation that not only made it challenging to sing but to dance as well.

"In one of the numbers, we have to do kind of a gym dance, and it’s hard to breathe and sing and do jumping jacks at the same time," said Mandi Mangiellos, 12, of Lindenhurst, who plays Amanda.

Not that performing outdoors is challenge-free. The set, which largely consists of brightly colored walls and giant building blocks, wasn't put up until the day before the show opened. Studio also brought in lights, microphones and sound equipment ("Legally Blonde" will have a live orchestra.) And Thursday morning's first outdoor rehearsal was marked by a downpour, though it didn't dampen the performers' spirits.

"This has been so much fun," said Amelia Pascal, 10, of West Babylon who plays the evil Mrs. Wormwood. "And I like how we get to have an audience."

Savannah Zeis, 11, of Lindenhurst added that she was just happy to be doing theater again after months of having to content herself with things like riding her bike instead. "That was kind of boring, because I'm always doing this," she said. "I'm never really not doing theater."

In addition to wearing masks during rehearsals, youngsters regularly sanitized and washed their hands, had their temperatures taken and were kept 6 feet apart. The last proved especially challenging.

"When the kids were singing, I had to spread them out in the theater," Rosselli said. "I have 140 seats in my theater. I had to say you sit here, you sit there, you skip a row. Just to put 20 kids in a theater and put them 6 feet apart when they sing is almost impossible."

For parents at Thursday's show, those actions eased their initial concerns about letting their children appear in the show.

"I was a little bit apprehensive, but the idea of socialization and not being stuck in the house and feeling normal outweighed it," said Maxine Demner of West Babylon, who daughter was in the ensemble. "And they took every precaution and did an amazing job."

Studio Theatre of Long Island will be presenting live stage musicals for the next three weeks. Face masks are required if you plan to go. Show times are 7 p.m., but the park opens at 6 p.m. and food and drinks are available. Here's the lineup: