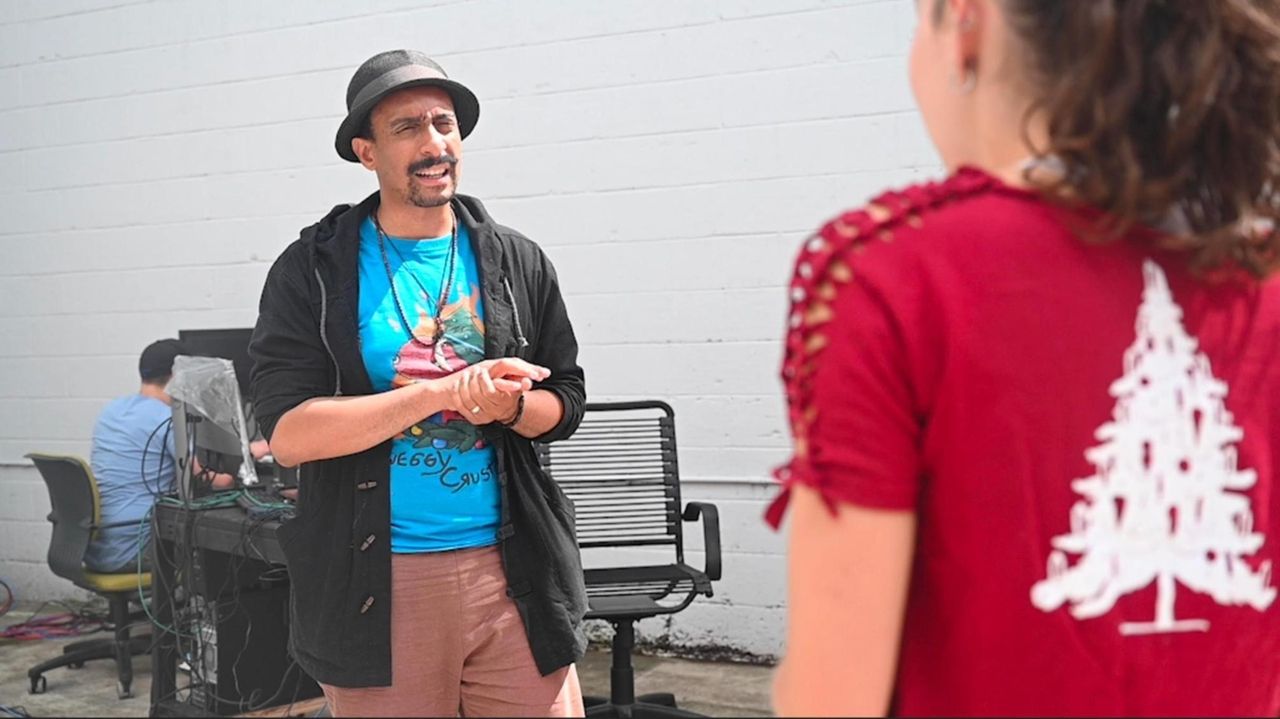 Bay Street Theater's "Wonder/Wall" is an immersive video performance series in which a different video artist's work is presented each week through July 31 accompanied by a 15-minute theatrical performance in the courtyard. Newsday talked to director Rasean Johnson about his presentation. Credit: Newsday / Alejandra Villa Loarca

As the pandemic has prompted a reconsideration of the ways we go to work and to school, arts administrators, too, have grappled with new models to connect to their audiences.

Bay Street Theater’s Josh Wilder is one of them. "What other ways can we tell a story?," the Yale School of Drama graduate asked himself upon his appointment in March as the playhouse’s artistic associate. His answer? "Wonder/Wall," a series of four distinct works being featured at — or, rather, outside— the Sag Harbor venue through July 31. Each week the work of a different artist is presented.

The immersive productions are staged under the stars in the theater’s courtyard and run a mere 15 minutes, a length of time more commonly associated with intermission. The action unfolds before an intimate audience of 20 standing in the center of the action. "In the age of staying home and watching TV all day, I wanted to create a visual storytelling experience that got us off the couch," Wilder explained.

Wilder’s debut project is also unconventional for putting the spotlight on projection design and casting live performance in a supporting role. While projection designers add depth, texture and mood to a theatrical piece, their creation serves only to enhance the vision of the playwright, director or choreographer.

"As a designer it might be your vision, but it is someone else’s story," noted Brittany Bland, one of Wilder’s former classmates who, along with Bay Street’s designers, participated in the project. "The chance to say something that you want to say is rare. It is important that it is my story."

With "Smile," Bland uses live video and audio to transport audience members to the middle of the Harlem-born artist’s family archive. "The media of projection sits well with memories. It’s kind of ephemeral," said Bland of her semi-documentary-style work. The designer also emphasized the importance of her physical presence as part of the performance. "It is crucial to the emotion of the piece, my relationship to the audience, to the medium, to the screen. I want people to feel the work on a personal level."

Rasean Davonte Johnson similarly explores the notion of empathy in "We Are In This Together, as well as the Stages: Shutdown, Crisis, Restart" by capitalizing on the opportunity the project presented to disrupt the traditional fourth-wall separation between the performers and spectators. "The audience is contained within the space, becoming part of the work," Johnson explained. "While we all experienced the pandemic, it’s about what one person experienced versus another. It’s about the idea of creating a lens outside the four walls and transforming one’s perspective."

Other works in the series include "Frankenstein," in which Yee Eun Nam has co-opted the legendary monster to create a prism of self-reflection, and "20,000," an amalgam of images and text from Jules Verne’s classic underwater tale "20,000 Leagues Under the Sea" and the writings of environmentalist Rachel Carson by Bay Street production designers Mike Billings and Brian Staton.

"Projection design pushes the emotionality of anything that we see," said Wilder, who clearly had this in mind when he chose "Wonder" as the performance theme. "I wanted to explore that ‘wow’ factor, the excitement that brings us to the theater."

With state-of-the-art technology taking center stage the designers were faced with an uncommon challenge, noted Bay Street’s artistic director Scott Schwartz. "How do you keep it human? How do you still make it about people? There’s a beginning, middle, and an end, but they are not really narratives. Rather, they are journeys, in which everyone has their own experience. The hope is, it will feel different and unexpected."