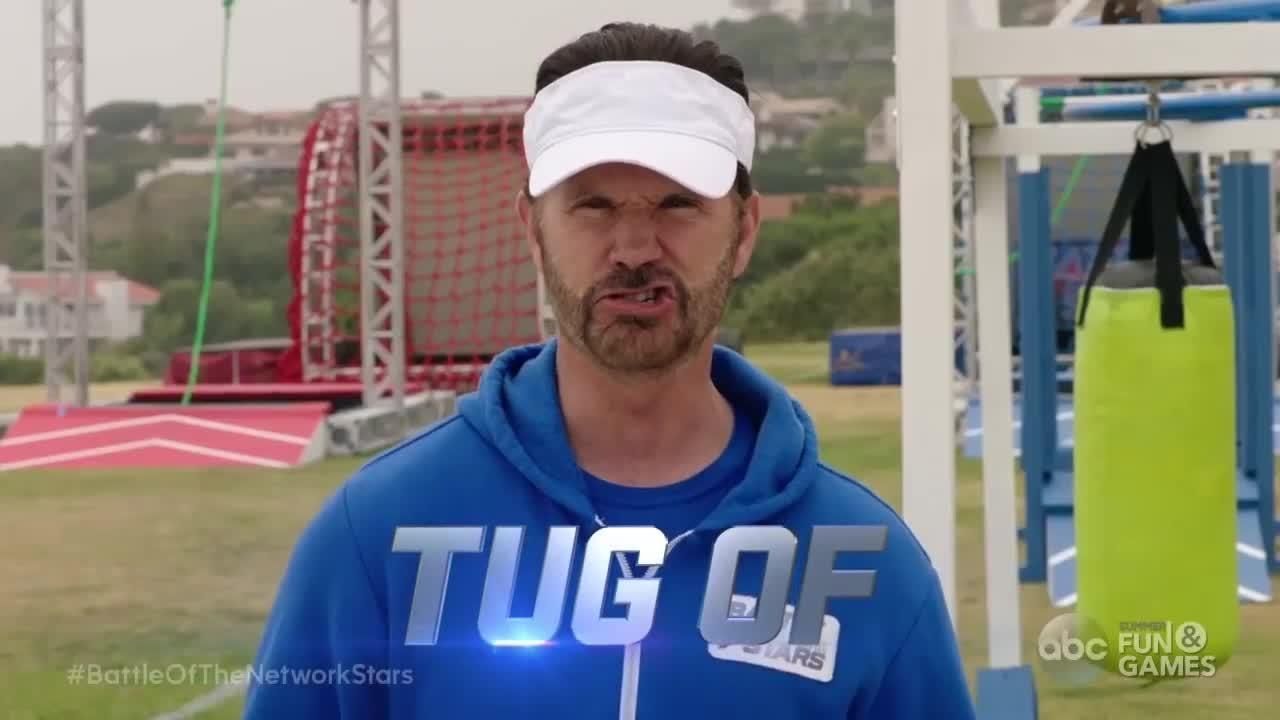 THE SERIES “Battle of the Network Stars”

WHAT IT’S ABOUT TV loves itself so much, it creates its own time capsules for future gawking. The ’70s and ’80s gave us “Battle of the Network Stars,” that inexplicable string of 19 trashsports specials (1976-1988) in which celebrities from sundry shows engaged in kayak relays, obstacle courses and tug-of-war. They competed on teams representing the era’s three broadcast networks, complete with cheerleaders, garish harvest-gold graphics and the stentorian play-by-play of egghead sportscaster Howard Cosell.

Here’s the Cosell drone on Patrick Duffy from 1977, then starring in “Man From Atlantis”: “This young man is well-co-or-di-na-ted” (the word seeming to have 12 syllables). Here’s Cosell on the fireplug star of “Baa Baa Black Sheep,” Robert Conrad, inevitably appearing shirtless: “Look at Conrad, that body so finely proportioned.” (Uh, creepy.)

At least their names are actually known to TV history. “Battle” participants tended to be sixth-billed celebs eager to keep themselves out there: Charlene Tilton (“Dallas”), Lisa Whelchel (“The Facts of Life”), Lou Ferrigno (“The Incredible Hulk”), Jimmie Walker (“Good Times”).

And guess what? They succeeded. Because all four are returning for ABC’s summer series revival of “Battle of the Network Stars.” It’s dy-no-MITE!

Walker’s catchphrase is inevitable, as are whiffs of both nostalgia and desperation. TV is superb at recycling itself in ways that appear charming while being bankrupt. (ABC had no completed episode available for preview.) At least the ’70s “Battle” was an original idea. And if its stars sound minor now, they were widely known at the time. Their era of just three major TV networks had prime-time shows watched by tens of millions more viewers than today’s.

In our multichannel universe, ABC’s new “Battle” features “who?” names such as Josh Henderson (TNT’s recent “Dallas”), Willie Garson (USA’s “White Collar”) and Jill Wagner (MTV’s “Teen Wolf”). Will TV be running their shows 40 years from now, as it does daily repeats of “The Facts of Life” (on Logo), “Good Times” (WPIX/11, TV One, Antenna) and “The Incredible Hulk” (Heroes & Icons)? Nostalgia casting among ABC’s 100 summer stars includes 20 who also appeared in “Battle’s” vintage incarnation. (Plus other TV throwbacks such as Erik Estrada and Danny Bonaduce.)

Not everybody is back, of course. That 1977 Duffy-Conrad-Cosell event also featured “Soap” supporting player Billy Crystal doing his impressions of both Cosell and Muhammad Ali, before the movies beckoned. “Laverne & Shirley” competitor Penny Marshall became a big-screen director. And ex-Olympian/commentator Bruce Jenner became Caitlyn.

But TV’s time capsule keeps them frozen in their disco-era short-shorts. (And Tom Selleck’s Speedo.) Read Dave Holmes’ retro appreciation at vulture.com/2014/04/dave-holmes-battle-of-the-network-stars-column.html Stream some of those golden moments via YouTube’s vault of vintage “Battle of the Network Stars” specials. Just search the show’s title on your computer — or better yet, your smart TV’s YouTube app for full-screen dunk-tank fun.

Google these stars if you want to get a sneak peek at ABC’s “Battle of the Network Stars” matchups this summer.