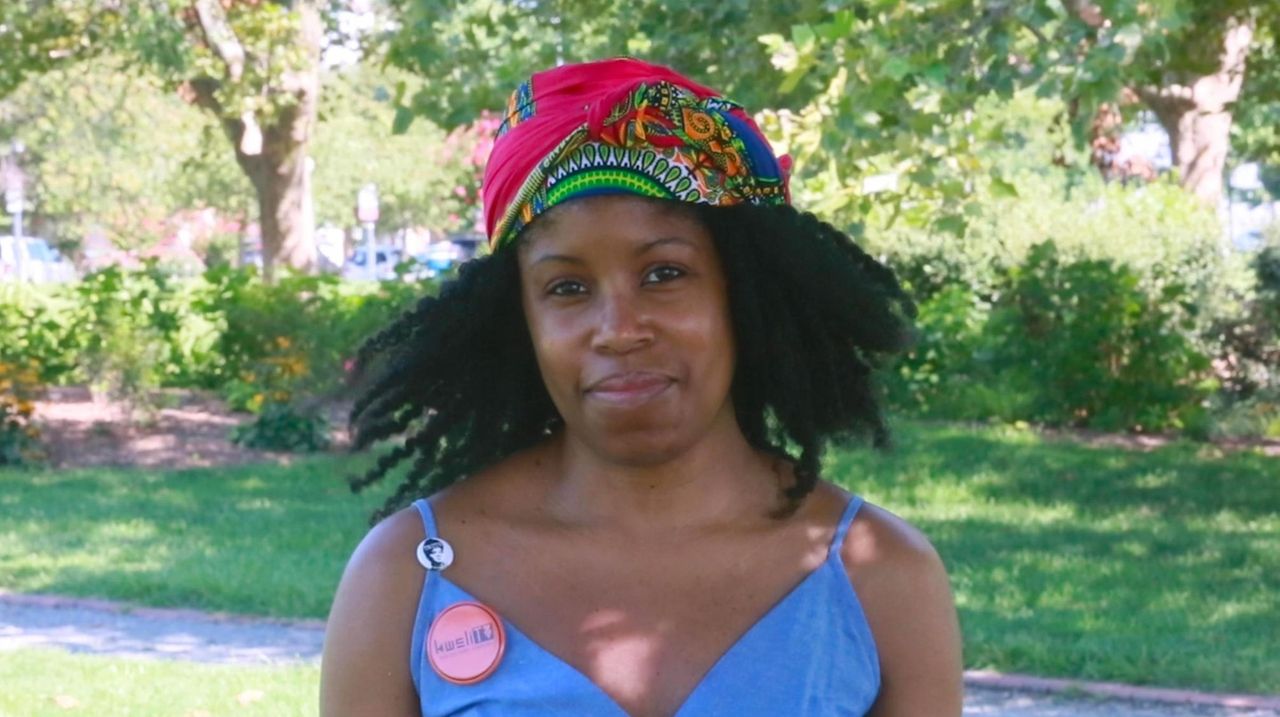 DeShuna Spencer is the founder of kweliTV, which is an “SVOD,” or streaming video on demand service, and is a 100% Black-owned company. Credit: Jay Paul

Most of us eventually have that mad-as-hell (and we’re not gonna take this anymore) revolt when it comes to the TV set. DeShuna Spencer tapped her inner Howard Beale about six years ago.

She recalls the exact moment. At the time a 20-something former newspaper reporter from Memphis living in Washington, D.C., she had picked up a channel guide, and began leafing through it. Hundreds of channels, nothing on. Specifically, nothing on for her.

Anybody else would have gone into default mode at that point by choosing the least objectionable time-killer they could find, but not Spencer. Instead, a spark of an idea began to take shape — one of those “what if?” sparks that can change lives if not the world. Her “what if” turned into Kweli.tv, which did a little bit of both.

KweliTV — “Kweli” is Swahili for “truth” — is a so-called “SVOD,” or streaming video on demand service. Netflix may be the world’s best-known SVOD but KweliTV, just four years old, is among the world’s best-known Black streaming ones. On a shoestring budget, Spencer has packed it with 420 movies, TV series, short films, documentaries and children’s shows from around the world, each a reflection of Black accomplishment in film or, to use her word, Black “excellence.”

“I had no idea what I was getting myself into, but I just knew that I wanted to see stories that represent me,” she says. “Mainstream media a lot of times tells this very narrow narrative about the Black experience.”

Spencer isn’t the only entrepreneur who’s had a similar epiphany these past few years. There are at least half a dozen independent Black SVODs, like American Legacy Network (classic films) or Black & Sexy (content that explores “racial politics, sexual politics, and intimacy”). X on Demand’s movies are required to have at least one person of color running the show. Black on Purpose TV has 24 individual channels devoted to subjects like education, health and entertainment. Brown Sugar features blaxploitation flicks from the ‘70s, with Pam Grier as its mascot.

Then, there are the big guns. BET+, which launched a year ago September, is almost certainly the leader in terms of subscribers (it doesn’t release exact figures). UMC (AMC Networks-owned Urban Movie Channel), is right behind. Launched a decade ago, UMC pumps out an original series a month, a torrid pace that’s scarcely slackened even during the pandemic

While the behemoth SVODs (Netflix, Disney+, Apple TV+, Peacock, HBO Max) got all the attention these past 12 months, the Black SVODs have something just as good: Buzz and growth. Moreover, they’ve upended the economics of the Hollywood production pipeline. In plain, non-show biz lingo, they’re hiring hundreds of people of color to work in front of and behind the camera. (Yes, even during the pandemic.)

Why this abrupt and long-overdue change? A little history is in order. The television military-industrial complex has traditionally been based on a from-the-top-down model. At the top are the executives, usually white men, who determine what everyone else (the bottom) will watch, while their choices have been either validated or dashed by the inexact science of Nielsen. Robert Johnson (who helped launch UMC) came along in 1979 to put the first crack in the model, with the launch of BET. Oprah Winfrey’s OWN arrived in 2011 to widen the crack, or cracks because by then TV (or at least cable) had long discovered Black viewers. There are now at least half a dozen cable networks directed at Black viewers.

Enter SVOD which is essentially an all-you-can-eat buffet that’s open all night. Better still, a buffet with few or no commercials. The crack is now the equivalent of the Grand Canyon, and that antiquated model on life support.

But the reason these Black SVODs are having their extended moment is a little more subtle, say observers. Brett Dismuke, the chief content officer of UMC, explains, “One of the things we have tried not to do is treat Black and brown America like a monolith.” That means a vast range of content out there. UMC’s alone spans soaps to stage plays to gospel to (literally) you-name-it. BET+ is the destination for anything (and everything) Tyler Perry. And if you must see Grier’s “Sheba, Baby,” there’s always Brown Sugar.

“It’s obviously a great moment for Black stories and Black storytellers, given the things that have happened in society,” says BET+ general manager (and former Netflix exec) Devin Griffin. “With the chickens coming home to roost — and with all those things that have been brewing for a long time — that means there are even more stories that can be told.”

While the deaths of George Floyd and Breonna Taylor may have galvanized the subscriber base, say executives, they also say that base was growing even before those tragedies. The Black SVOD’s success has been more about subverting expectations, they say, or the wider culture’s idea of what Black people watch or what that culture thinks Black people are.

With diversity comes choice, and better yet, opportunity. The actress Jennifer Sears, who just helped close out the final season of OWN hit “Greenleaf,” calls the Black SVODs “vital to the art of uninhibited Black storytelling. Platforms like UMC and Kweli that celebrate and promote Black culture [and] creativity give us — Black, Indigenous and people of color who are actors and creatives — a space to be embraced, acknowledged, and commemorated, a place to be authentically ourselves.”

The soap star Victoria Rowell (“The Young and the Restless”) may be the perfect example of this point. Raised by adoptive parents in a remote part of Maine, she came to Hollywood thirty years ago to become an actress, and did, with roles on “Dumb and Dumber,” then an eight-season run on “Diagnosis: Murder.”

During her nearly 20-year run at “Y & R,” she sought to direct episodes, she says, and was rejected. She then began pitching an unscripted DIY series inspired in part by her upbringing on a Maine farm. “I spent years trying to get it off the ground, and was met with ‘no thank yous’ [because] it was something executives could not wrap their heads around.

“It was so flagrantly about race, and nothing more, but I was determined to stay in,” she says. “I’m a Mainer and still wear my Timberland boots [and] glad I did stay in the race.”

Indeed, UMC bought that DIY show “Trash vs. Treasure” — about low-income mothers who “re-imagine” homes with found or used items “on a micro-budget” — which is soon to go into a second season. She has also produced a couple of other series for the streamer, including prime-time soap “The Rich and Ruthless,” now three seasons in.

UMC’s Dismuke puts it this way: “We tapped into an underutilized market, knowing that traditional Hollywood was not allowing everybody to eat at the table, so we had to create our own table.” He adds, “our staff and executives look like the people who are paying a monthly subscription to watch us [and] that’s the first time in my 26-year career that I have been part of a company where I can actually say that.”

Meanwhile, what about those paying subs? Their reasons for shelling out five or six bucks a month for these services may well be as diverse as the programs they are seeking. Nevertheless, Dr. Teresa Taylor Williams, a Manhasset-based psychologist — also owner/publisher of the Great Neck-based New York Trend, a weekly newspaper edited for Black Long Islanders — has a particularly compelling one.

In a recent interview, she said her patients “were asking me, ‘how can we lower the racial tension we’re feeling because everyday we’re seeing on TV [news] people of color who are protesting and are angry and then there are those others who are creating a horrible image by looting. I need something, I need an alternative for my children to watch, even me, just to take it down and remind me that there’s another side …’

Taylor Williams said she sent them to services like KweliTV “where they could find shows with Black representation that they hadn’t seen before and they did, and it did help. “ Patients with young children were wondering whether they should stop watching altogether, but “I said but you do have to offer an alternative to that iPad — something on John Lewis or Martin Luther King Jr., or these documentaries or alternative programs that gives them another view [while] bringing down the anxiety level. Every person right now, especially people of color, is really stressed and wherever they can find comfort, that’s beneficial.”

When DeShuna Spencer started KweliTV, she clearly had this in mind. Pitching seed investors, she recalls, “they’d say, ‘well, Black folks don’t like documentaries’ or ‘you need to have ‘World Star Hip Hop’ [the vast news/video aggregate blog] on board and partner with them. And these were Black investors who told me craziness like this. We sometimes fall into our own mega-stereotypes.”

Documentaries, she adds, “are our number one genre, by far.”

After the murder of George Floyd, “a lot of companies put out statements in support and we didn’t because obviously Black lives do matter,” she says. “The entire mission of our platform is celebrating Black lives.

“Between COVID-19 and George Floyd and Brionna Taylor and all the Black suffering, I don’t want to be a space that causes more triggering. I want this to be a safe space for Black people to come, and watch a particular film and say ‘this is amazing.’ I really do believe storytelling can be a way in which people can heal.”

Meanwhile, Spencer has something to say about the ongoing Black SVOD “moment” too. “I do hope this is more of a long-term movement than a moment. A lot of times in the media cycle everyone’s talking about one thing and then they stop talking and focus on something else. But whatever happens, people aren’t going to stop caring about Black lives, and I’m not going to stop caring either. That’s our goal, our mission and will never change. It’s why I’m so excited and optimistic about the future.”

CONTENT: In Brown Sugar's inimitable phrasing, you can "stream the biggest collection of the baddest movies! Uncut, commercial-free, too cool." Those include "Cleopatra Jones" (1973), "Blacula" (1972) and "Black Caesar" (1973).

CONTENT This is the priciest of the Black SVODs but if you want Anything Tyler Perry, this is the place to come — his 20th stage play will launch on the service Aug. 27 — while Perry-produced original series "Ruthless" and "Bruh" are exclusive to the service. Meanwhile, it has a huge vault of shows (2000 episodes-plus) including from the Viacom-owned networks (of which BET is one), including VH1's "Love & Hip Hop: Atlanta," "Basketball Wives, "T.I. & Tiny: The Family Hustle," Comedy Central's "Why? With Hannibal Buress," MTV's "Todrick," TV Land's "Soul Man," and Nick at Night's "Instant Mom."

CONTENT Like BET+, a huge vault but more originals than BET+ including "Bronx SIU," "Ladies of the Law," and "Jacqueline and Jilly" which stars Victoria Rowell (who also stars in "The Rich and Ruthless"). There are also lots of unscripteds including docuseries "Naked Hustle" which "takes viewers inside the taboo and compelling world of strip clubs …"

But "Monogamy" — from veteran director Craig Ross Jr. — may well be UMC's biggest draw, described as "an ensemble drama about 4 couples to undergo a new type of treatment called Swap Therapy to repair their broken marriage."