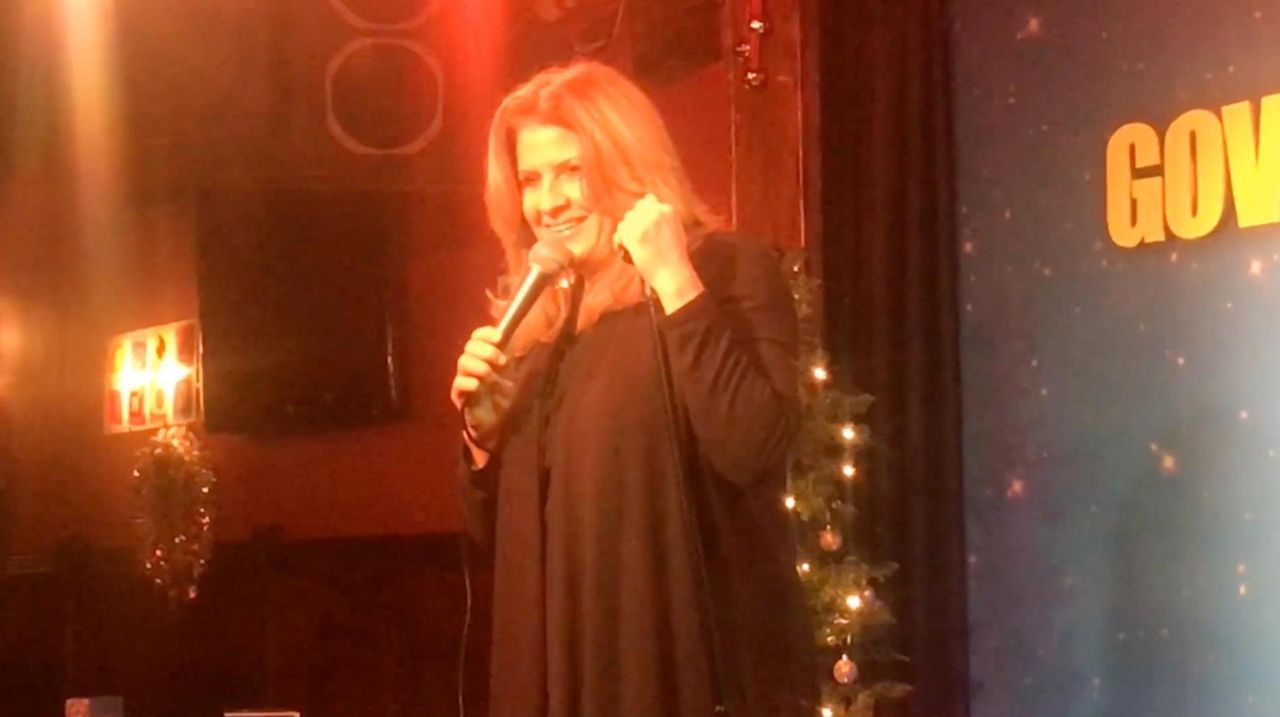 Aspiring and established stand-up comics say the genre of live entertainment has its niche on Long Island during interviews in December 2018. Credit: Newsday / David Criblez

Not all husbands are fat, hairy, lazy slobs. But take her husband — please!

And with that running-thread theme, Bethpage born-and-bred comedian Carie Karavas is off and riffing on her first TV standup special, "Men, Flaws and Menopause," shot at The Argyle Theatre in Babylon and premiering early-morning Thursday, Jan. 23 on the streaming service Crackle. She gets her licks in with Ikea, Home Depot and taking care of hundred-year-old relatives as well.

"David Ozer heard about me," Karavas, 54, says of the CEO of Crackle's sister company, the production house Landmark Studio Group, "and somehow we got in touch with each other and he came to The Brokerage [comedy club in Bellmore] with his wife and friends to see me perform and that was it. He was like, 'Wow, I think you're great. Let's do this.' And that changed my whole everything."

Karavas' "whole everything," professionally, has meant some 30 years of regular but not fame-inducing gigs at such Long Island venues as The Brokerage, Governor's, McGuire's and My Father's Place, such Manhattan spots as the Comedy Cellar and Dangerfield's,  the Poconos and even internationally at comedy festivals in Montreal and Amsterdam. A working comic, she's paid her dues and shares in the distinct camaraderie that even famous standups often have for the performers with whom they came up.

"They just have more money and more fame," she describes. "But Dave Attell is the nicest guy. Kevin Hart used to sit on my lap at the Comedy Cellar. You're together every night with all these guys. … So when you see them now, even though they're famous, I'm like, 'Hey, what are you doing?' And they're, like, 'Karavas!' "

Karavas got her start in the mid-1980s with a standup class that culminated in students performing at the famed New York club The Comic Strip.  She was hopping between coasts in those days, learning film and TV makeup in Los Angeles and then working in that field. "Then in 1990, I said, 'No more makeup, no more anything but comedy.' And that's what I did. I became a comic fulltime in 1990."

Along the way, she followed in her restaurateur family's footsteps and opened two outposts of a Greek café, Gyrolicious, in East Meadow and Jericho. She left that line of work two years ago since between it and the comedy, she says, "I found myself having no life and my children were growing up alone." She has two kids, one in high school and one in junior high, with husband Tsambikose "Sam" Volonakis, originally from the Greek island of Rhodes, raised in Queens, and since 1999 employed by the Long Island Rail Road.

He and Karavas married in 2005, and despite his wife's routine on the standup special, Volonakis in person seems perfectly nice, perfectly normal-looking and a perfectly good sport. "He rolls with everything," Karavas says. "He used to be a lot bigger, but he's lost a lot of weight. So I call him fat onstage and then people meet him and they're like, 'You're not fat.' Yeah, he lost weight. But," she zings, "he is hairy!"