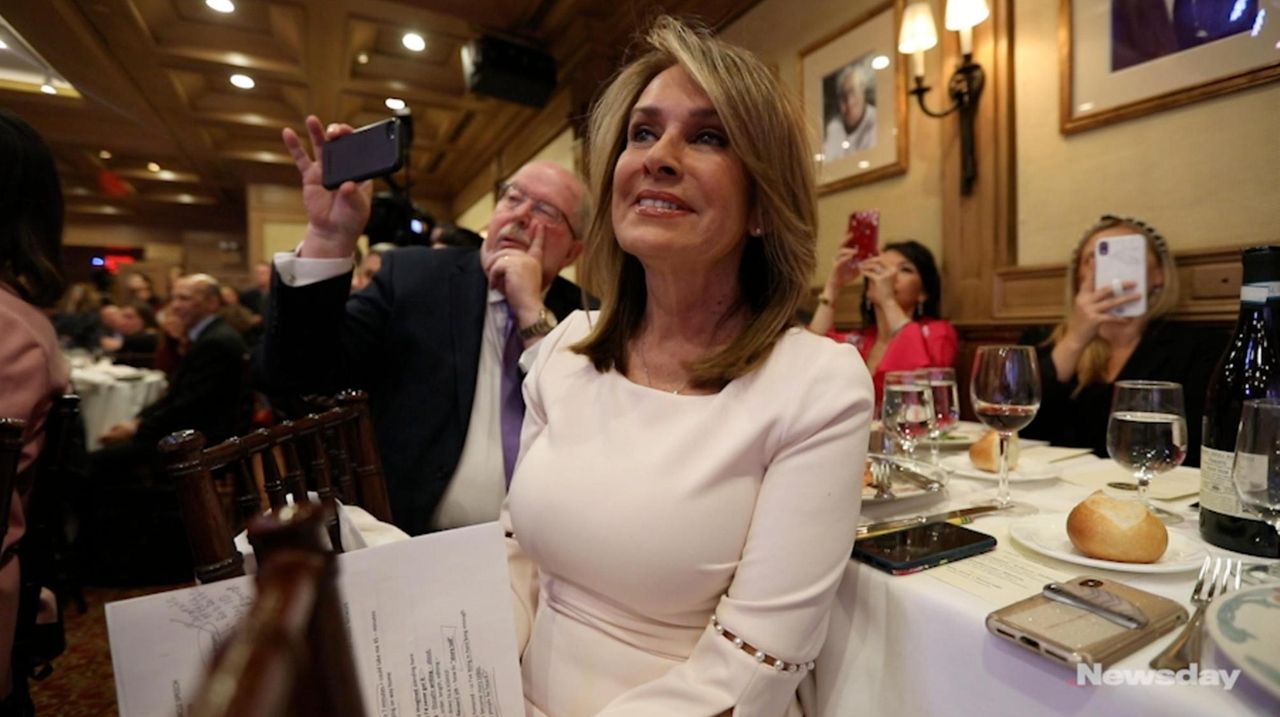 After nearly a half-century in broadcast news, spanning Long Island radio to News 12, Carol Silva will retire this month. She sat down with Newsday at the Manhattan's Friars Club, where she received an Emmy award for a distinguished career in broadcasting, to talk about her career. Credit: Linda Rosier; News 12 Long Island

Carol Silva arrives at Manhattan’s Friars Club at precisely 10:30 a.m. for an appointed interview. It is a Friday, a gray one, and she will be getting an Emmy award for a distinguished career in broadcasting in just under two hours. Much to discuss, not a moment to waste. She rushes through the revolving doors of the venerable club — a human gust of wind past portraits of Sid Caesar and Don Rickles who almost seem bemused by this unfamiliar force of nature in their midst. Silva’s husband, Bob Reilly, and their youngest son, Shane, 25, follow in her wake. They’re not bemused. They’re used to this force of nature.

After nearly a half-century in broadcast news, spanning Long Island radio to News 12, Silva knows there’s a sanctity to time, a remorselessness, too. There’s only so much time to tell a story, so much to get it right. The same could be said of life, or at least Silva has said that often about her own life. There’s no do-over. Make the most of it. Don’t just seize the day. Seize the moment.

By her own admission, Silva has seized a little more than she expected or perhaps wanted to in recent weeks. Over the summer she told viewers that she would wrap a legendary run at News 12 by December. (Her last day is the 20th.) Then, a couple of months ago, she was diagnosed with stage 4 cancer. A tumor that had been spotted on her lung metastasized to a cluster of tumors in her brain. She was off the air for weeks while undergoing treatment.

But after setting up for this interview — a photographer adjusting a lens, a reporter ready to ask about the elephant crowding the room with us — Silva needs little prompting. “I feel fabulous. I feel fabulous every day.”

In person, as on TV, Silva, 65, radiates energy, typically of the sanguine kind. She speaks rapidly, volubly, as if words alone could bend reality to her will. Her eyes are dark and deep set. They lock on to whomever she is speaking with. She can turn the most casual of conversations into a confessional — typically, or unexpectedly, your own confessional.

But the cancer has forced the conversation back around on her. “It’s one of the first things people want to talk about and that’s such a small part of my story,” she says, dismissing it as a speed bump and most likely vanquished by the cutting-edge genome therapy she received at Northwell Health’s Monter Cancer Center in New Hyde Park. “I chose to live happily,” she says. “I chose happy. If I fall apart it doesn’t change my journey except to make me more miserable.”

Silva’s longtime friend, Kathleen Regan — herself an ICU nurse at Northwell in Syosset — says by phone a few days later that “I’ve been to 90 percent of her doctors’ appointments and according to them, the type of cancer she has can be treated with a new type of [immunotherapy] that will give her a chance of living for many more years in a good state of health.’’

Regan adds, “that’s not something I would have told you five years ago.”

Silva will leave News 12 Long Island in a few days, and her future is wide open. No more cancer, hopefully. No more early mornings, no more TV. If that seems inconceivable, maybe that’s because it almost is. She joined News 12 in 1987 after a career in morning radio that began in college — WBAB, WGBB, WLIR along with assorted stops at WOR, WNBC and elsewhere. For three decades, she awoke in the middle of the night — most recently at 2:15 a.m. — to get to the Woodbury studio. Since March, the show she anchors with Elizabeth Hashagen, Elisa DiStefano and Rich Hoffman has started at 4:30. Silva has been on the graveyard shift nearly 50 years, which makes her the dean of local morning TV and, along with Doug Geed, News 12’s charter anchor.

To insiders at News 12, she’s a role model, particularly to female colleagues. Geed says that her “empowerment of women” in the newsroom “has to be a big part of her legacy.” She’s also been a stabilizing figure in the wake of 2018 cuts that led to the departure of well-regarded veterans like Colleen McVey. News 12 correspondent Virginia Huie says Silva will “leave a void. She’s a guiding light [here] and it will be very, very hard.”

“There’s not a decision I’ve made or a problem I’ve faced where I haven’t had Carol with me,” says DiStefano. Hashagen calls their 16-year run together an “anomaly” that’s let them “grow together and not only as co-workers but as close friends in real life.”

Spend any time around Silva like they have — minutes even — and her world comes into sharp focus. Its bearings are local, its vibe relentlessly upbeat. She lives in Oyster Bay where she raised three children — Jason, daughter Connor, and Shane — and regularly attends mass at St. Dominic’s. She has sat on dozens of charity boards and committees, attended countless school sporting events. She has coached and ran a Girl Scout troop where she met Regan.

Silva has lived two full lives, both within an 8-mile radius of where she grew up in Hicksville.

Friends and family also insist that she is indeed the cockeyed optimist viewers know from TV — not remotely an affectation, or morning TV happy talk to make the coffee go down easier. “I get asked most often about her — is she really like that?” says Hashagen. “She’s really like that.”

Silva explains herself by way of her family and community, or what she calls her “tribe.” “I was born in the middle of two brothers, three children in three years. Our dad was in the Marines for 20 years. He was a medical corpsman with the First Marine Division in World War II. We grew up with so many other military families in one of those little Levitt houses [on Bond Lane]. I shared a bedroom with one of my brothers until I was 7 years old.

“Financially, we didn’t grow up with anything. As far as family was concerned, we grew up with everything.”

Silva's husband of 28 years, Bob Reilly, says she has "an inner light" that comes from "spirituality and from the happiness she brings to life." And those, he adds, come in part "from her upbringing."

Silva's mother, Carol, who died in 1995 from breast cancer, gave her an abiding faith — Silva once considered becoming a nun. Her father, who died in 2000, was equally formative in that upbringing.

Alfonso Ramon Silva — Tony to friends — was born in El Paso to Mexican immigrants, and after his mother died when he was two, and his father left, he was effectively orphaned.  Enlisting after Pearl Harbor, he fought alongside Marines as a medic in Guadalcanal, Bougainville, Tarawa, Iwo Jima and Okinawa — some of the bloodiest battles of the war — much later returning home to raise a family and to purge the horrors of what he had witnessed. Towards the end of his life, he survived pneumococal meningitis, but not its ravages, which included the removal of part of his stomach, intestines, and a leg after gangrene had set in.

Through all this, Tony Silva sustained what his children and Reilly say was the purest, most candescent expression of optimism any of them had ever seen before or since.

Brian Silva, Tony’s youngest son, says that “up until his passing, he was the most optimistic human that I’ve ever met.” Kevin, Tony's oldest son, puts it this way: “My father defined success as the positive impact one has on the lives of others.”

That, say her brothers and friends, also defines his daughter.

In 2000, one of Regan’s children died — a toddler. “When all the well-wishers were gone and all the food stopped coming,” she says, her voice catching, "Carol never stopped coming.”

Back at the Friars Club on that late fall day, Silva is asked what gets her through the dark night of her soul. She laughs. Seriously?

“If you are feeling bad and having a lousy day, go out and do something for someone else. That’s what feeds your faith. If you don’t like someone, look into their eyes and look for the good.”

Silva says she has no immediate plans beyond preparing for Connor's wedding in the spring. Her husband — retired after a career as an operations engineer in network news, now a teacher at Portledge School in Locust Valley — says she’ll do charity work and write the book she’s always wanted to.

Her son Shane remembers sitting with his mother at the kitchen table before she decided to retire from News 12. Like anyone leaving behind a long career, Silva — yes, this Silva — harbored reservations. What next? What could she do? What did she want to do?

“I was like, 'That’s not a problem for you at all,' ” he says he told her. “ 'It might take a little while, but you’ll figure something out and you’ll work as hard as anyone to get it.' ”

The interview over, Carol Silva — buoyant, happy, her career Emmy in hand — dashes out of the Friars into the late afternoon. Agreed: Not a problem at all.