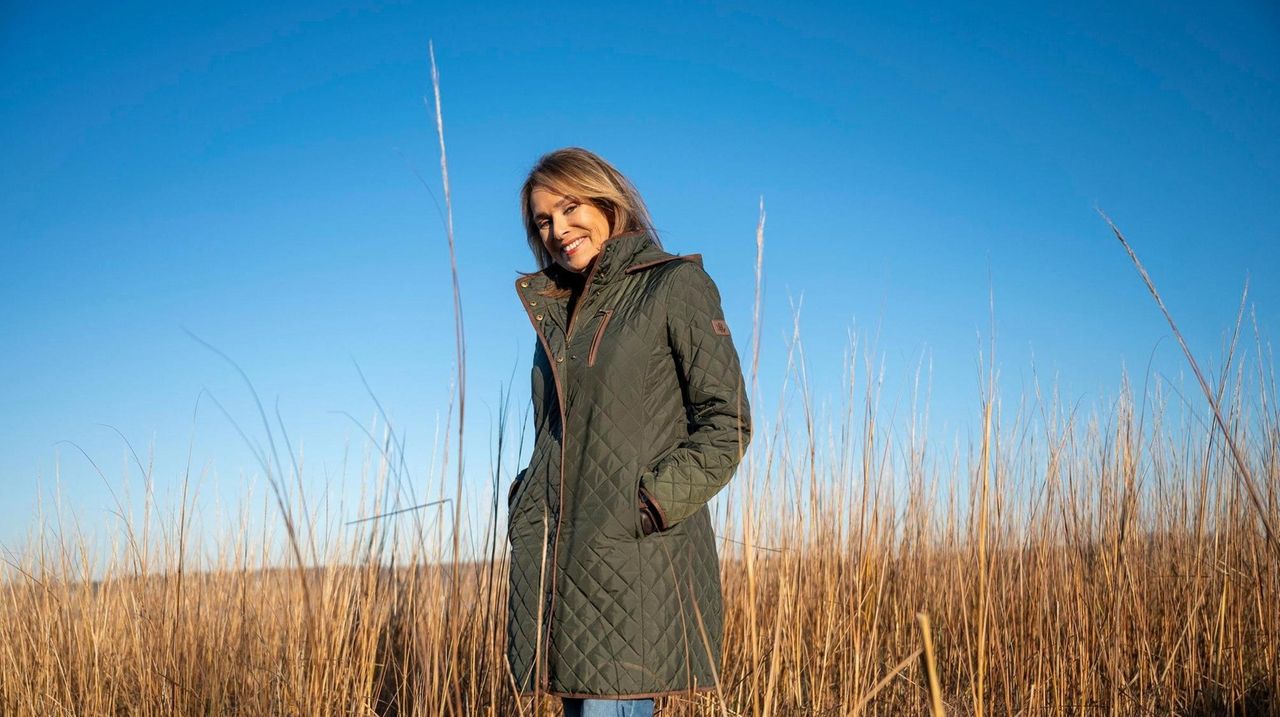 Newsday sat down with former News 12 anchor Carol Silva to discuss what life has been like a year after retiring. Credit: Newsday / Alejandra Villa Loarca; Linda Rosier; News 12 Long Island

It is nearly a year since Carol Silva retired from News 12, and the day is brilliant blue, as if she has willed it into existence. Her personal motto has long been "I choose happiness." Could Silva also perhaps choose the weather?

Like the rest of the world, or the rest lucky enough to have jobs that require they venture no further than a computer, we are attempting to converse by Zoom. But unlike the sparkling late fall day, the audio refuses to comply. For a few long moments, we stare mutely at one another across a virtual gulf until we finally figure out the confounded thing. Her voice then suddenly arrives — the same old familiar voice, with that selfsame optimism.

The amusing Zoom mishap quickly forgotten, she does admit that before she got on this call she had been wondering whether "anybody wants to hear my story a year later." As if on cue, she lifts up onto her lap, then up to the screen, her constant companion in COVID-lockdown and partner on endless beach walks, Guinness — like the beer, or the world record.

As you guessed, Guinness is a dog, and he certainly seems eager to hear that story.

"I've gotten busy filling myself with my quiet," she says. That has resulted in "the most deeply spiritual year of my life," then remembering what the past year has been like for everyone else, adds, "I won't mind kicking it in the butt in a couple of weeks and saying sayonara" either.

Silva stepped down from News 12 last Dec. 20, wrapping a career that spanned five decades on local radio and TV. Months earlier, she had received a devastating diagnosis of stage 4 lung cancer then spent much of last fall undergoing treatment, including gamma knife radiosurgery on a dozen tumors in her brain. She has since recovered and is now cancer-free.

For all of the 33 years at News 12, she arrived in viewers' homes along with the rising sun, or — because this is Long Island — along with the bleak, spreading gray of a winter or spring dawn. Besides anchor skills, her job demanded a degree of buoyancy and optimism. Improbably, or superhumanly, Silva largely maintained both over that long span.

While impossible to verify, a case could be made that Carol Silva was the happiest morning anchor in the long history of local morning TV over that stretch. Then she was gone, just when her unique brand of optimism was arguably needed the most by her fans.

While lives move on, Silva, 66, could hardly have anticipated the direction hers would move in. When the first wave of the pandemic hit in early spring, she was getting ready for her daughter Connor's wedding which had to be postponed. Immediate plans to clean out the basement and attic were fulfilled. There was painting to do in the Oyster Bay home she and her husband, Bob Reilly, have lived in for decades. Most of that's been done, too.

She took long, masked walks on long, empty beaches with close friends, her so-called "Corona Girls." "I've gone to the beach as much as possible," she says, "any beach, especially with waves. Guinness is tired of my walking. We'll go two, sometimes four, sometimes six miles a day. When I do more than three I know I'll be carrying him at some point."

Retirement can get old fast but quarantining can get old faster. To avert the tedium, Silva kept busy by doing what she always did, albeit this time remotely. She wrote profiles and columns for the magazine, Long Island Woman, (most recently on another veteran TV personality, Deborah Norville.) She plunged into charity work, some allied with her church, St. Dominic's, helping with about twenty events around Long Island. There were a couple of lifetime achievement awards to accept (virtually) from media groups, also virtual speeches to give.

Then, there was the little stuff. News 12 named a Woodbury studio after Silva when she retired, but she was possibly more excited about the coat she was given — a long, flowing thing with the words "News 12" emblazoned on the back.

She took the coat to her "monogramist" — Silva loves monograms so much that she actually has one — who replaced the "News 12" with the words "First, Be Kind."

Her health, which was such a major part of her life up until her retirement, turned into an asterisk this past year too. A nonsmoker, in 2019 she had been diagnosed with stage 4 lung cancer, which was followed by treatment at Northwell Health Center's Monter Cancer Center in New Hyde Park. This past September she posted on Instagram that she was cancer-free. After thanking her caregivers, family and friends, she said in the Instagram post, "What’s next? I’m going to continue to try to grow my soul so that I continue to try to do more good for more people."

For someone who once considered joining a religious order, the "soul" has long been a preoccupation of Silva's. In her faith, one tends to the soul as one tends to a garden. The process is never complete while sometimes regeneration is necessary, self-reflection is a requisite too. To slack off on the effort risks forward progress, especially risks the soul's primary purpose which is to help others.

Over her decades on the air, Silva was the rare TV news person of faith. In the news business, faith is something to be ignored or sublimated, as an impingement on the facts, irrelevant to the what-just-happened. But over many mornings, Silva found a holistic workaround. "The message I've always tried to give is that we've gotten through terrible times before," she says. "We got through World War II, which is ancient history to most of us but not our parents or grandparents. We got through the 1960s, with a war in Vietnam, and demonstrations, and racial demonstrations here. We got through Sept. 11 — good God. You don't get over it but you do to learn to live with these things. There are always challenges and challenges change, but we get through them."

"If I miss anything [about the News 12 years], I miss the opportunity of reminding people of that."

She discovered, however, that she needed the opportunity to remind herself of that as well. "You do 44 years of news, there's a lot of bad news out there. If you're human, you can't do so many stories about violence against children, violence against women, violence and race, the loss of homes to fires, loss of jobs, the political discord in this country, without internalizing the experience. That's what I did."

She doesn't know whether the stress contributed to her cancer "but I think how we feel and what we think and experience has a physical effect on us. I did have a mutation in [in lung cells] but I don't know if that was caused by the air I breathed or the experience of living a hard-charging life or the accumulation of all the news."

One of her inspirations this past year was Norman Cousins, the famed journalist, peace advocate and prolific author whom she interviewed back when she was a radio reporter for WLIR. Cousins, who died in 1990 at the age of 75 after years of battling various lung ailments, had famously explored how laughter, love and kindness can promote physical well-being.

She also channeled memories of a long-ago college professor who once told her that "'for every negative thing you tell a child, then tell them seven positive things …'"

"We need to do that to ourselves," she says. "I certainly know that my attitude and my deliberate choices have been a part of my cure and everyone one of my doctors has told me that."

Meanwhile, Silva prays. "My prayer happens two ways. When I get to the chapel [at St. Dominic's in Oyster Bay], I'm quiet and I'll listen. I [also] pray an ongoing conversation with God … I will say, 'wait a minute, please come into this with me …'"

With that thought, Silva pops out of the Zoom screen to reach for something which she then holds up. It's a cross she bought while Christmas shopping with a monogram — what else? — sewn into some fabric that encases it: "When life gets hard, kneel."

She prays often, and compulsively, sometimes quietly, other times not so much. She will offer prayers, multitudes of them, for loved ones, her children, for those stricken by COVID, or those with cancer. She prays for her doctors and nurses, for her neighbors and friends, and for those she may hardly know at all. The prayer net is cast wide and far, so of necessity "my conversations with God [can] have yelling and screaming involved. Sometimes I'll pray to Mary and [say] 'go to your Son' [and tell him] this [person] needs help … This one needs help. Go.' Sometimes I'll get a little aggressive with my prayer."

She also prays for herself. "When I was diagnosed, I asked other people to storm the gates of heaven for me and be so loud that God couldn't ignore us."

For Silva, prayer both feeds and enriches her innate optimism because they are indivisible from one another, she explains.

"My husband's got an Irish sense of humor when he talks about my optimism [and] sometimes it is probably a little much all the time. But I always say I grew up with great examples. It's the way the road was paved for me [and] just because you didn't grow up with optimism every day, doesn't mean there aren't ways to become more optimistic."

The afternoon is growing longer when Bob wanders into her office. I ask him the obvious, or maybe just ask him to corroborate. Yes, absolutely his wife is the most optimistic person he's ever known. There's not even a contest. Did she have any regrets about leaving the news business? None whatsoever: "Having spent 32 years in TV news [most recently as manager of operations at "Good Morning America"] there comes a time when you know it's done, that it's over, or should be over. She got out, unusually, on her own terms and beyond expectations.`"

Or this: Did he learn anything new about her during those long, quiet days under lockdown?

"I don't know if I learned, but was reminded," he says. "She's always looking for a way to give back. She spends every waking moment thinking, 'what can I do for others?'"

"As we all know, there's a lot of need right now."