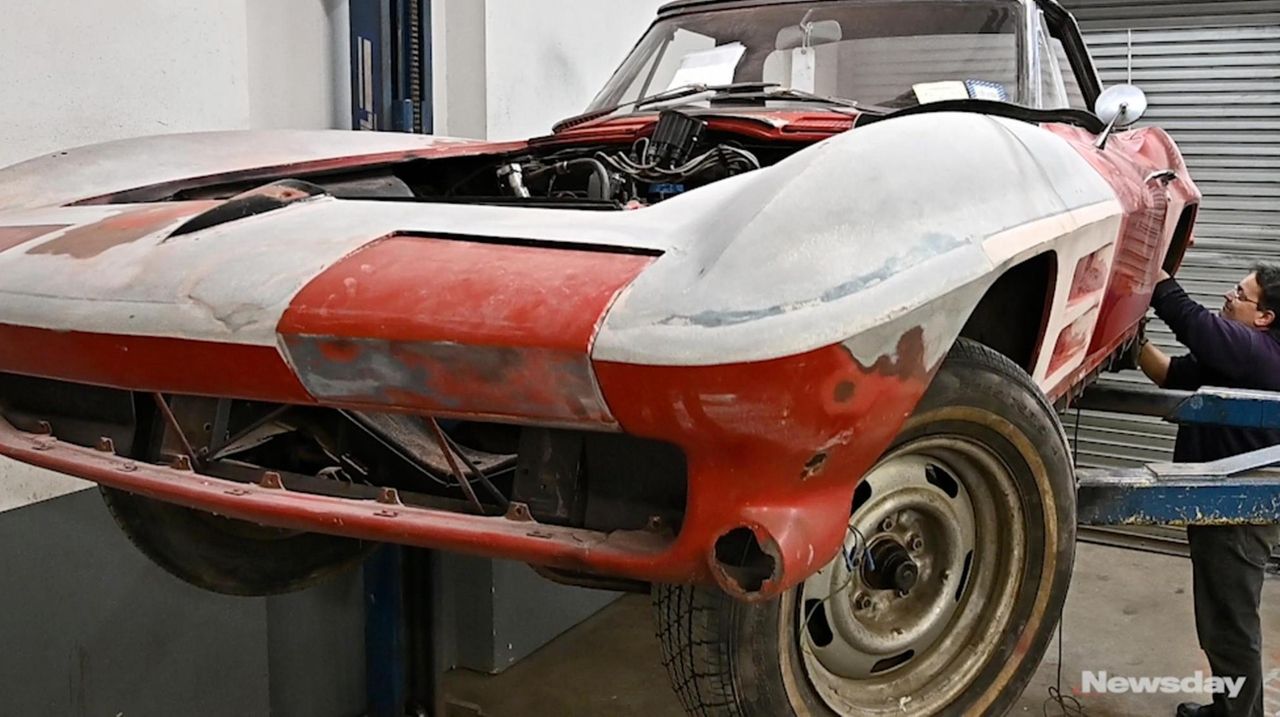 Chris Mazzilli, owner of Hicksville-based Dream Car Restorations, spoke to Newsday about his love for restoring old Corvettes. He will be featured in "The Lost Corvettes" (airing Saturdays at 10 p.m. on FYI and Sundays at 10 a.m. on History). Credit: Newsday / J. Conrad Williams Jr.

Chris Mazzilli doesn't look like a car guy, which sets up this fairly obvious question: What is a "car guy" supposed to look like anyway?

On a recent day, he's standing in the machine shop of Dream Car Restorations in Hicksville. Tall, thin, hair closely cropped, Mazzilli is attired in what might be called bespoke-chic. Standing next to him is his partner at Dream Car, Dave Weber. Decidedly anti-bespoke-chic, Weber is wearing grease overalls, and has extravagant white muttonchops. He looks like someone who has spent a lifetime under the hood of a car. This Locust Valley native pretty much has.

Mazzilli and Weber, 60, met in the early aughts when they discovered a shared passion — the Corvette — then opened Dream Car seven years ago. Corvettes in various states of repair and disrepair fill the garage, along with the odd muscle car or two.

But those Corvettes are what draws the eye.

A few are world-famous which explains the aura of mystery and intrigue that still seems to hang over them like the haze of car exhaust. They're buffed and beautiful at the moment.  Until recently they were covered in grime collected in a Manhattan garage where they were hidden for a quarter of a century. They are esteemed members of the Corvette world's most celebrated and elusive collection, the so-called "lost Corvettes."

All 36 of the lost Corvettes — one for almost every year it was made, starting in 1953 — are worth millions of dollars, although no one is exactly certain what their total value is. Each will be part of a sweepstakes charity in May, in a car giveaway that should easily top that one by Oprah Winfrey a few decades back.

That's where this Odd Couple comes in.

Until recently, Dream Car's low-slung hangar-style facility off South Oyster Bay Road was a TV set, with cameras as witness as half a dozen of these famed Corvettes were brought back to life. The History/FYI series, "The Lost Corvettes," wrapped this past Sunday and discussions are now underway for a new season. (You can catch up with the episodes on video-on-demand, or on the FYI app.)

The short-run series performed "solidly" while the "audience grew episode to episode," says a History spokeswoman. Mazzilli says he expects a second-season pickup if only to cover that charity sweepstakes.

But all of this — the TV show, those glorious cars, the machine shop and the incessant shrill screech of a drill bit as it pounds a lug nut into some engine block — is Mazzilli's day job. He has a night one too. He and his brother Steve run the Gotham Comedy Club, which is one of New York's top stand-up venues, also launchpad for careers — most notably Jim Gaffigan's — and shows on Comedy Central and Mark Cuban's AXS network. The brothers also managed the early stand-up careers of  Amy Schumer and Sebastian Maniscalco.

Obviously, two words best describe Mazzilli (comedy, cars) but on this day, he seems especially pumped about cars, and one in particular: The '83 Corvette. GM never made the '83 due to a tangle of regulatory and technical issues, so in 2017, he and Weber built one right here. A History special on it was titled (what else?) "The Lost Corvette" and aired this past July.

All of which sets up another reasonable question: Who even does stuff like this? "He's the Rain Man of the Corvette, and knows every nut, bolt, and spring — every single detail,"  says Adam Heller, whose family along with another family, the Spindlers, bought the "lost" cars in '14 then hired Mazzilli as consultant (by the way, he's a distant cousin of former Mets star Lee Mazzilli).

"To make sure he's on his game, I'll leave little stuff [on a finished car] that he can find, like a thumbprint, or a little dirt on the interior carpet. He always finds it."

In a phone interview, veteran stand-up and Huntington native Adam Ferrara insists that cars and comedy are genetically linked on Long Island because "it's filled with people who are convinced they can beat the traffic and will do whatever they can to prove they can beat it [but] never do."

"There's something in that dynamic" which makes Mazzilli's twin passions perfectly logical but Ferrara admits that "I really don't know how he does what he does. He does everything well." Billy Gardell ("Mike & Molly," "Bob Hearts Abishola"), another friend, says  "he's very methodical about the right way to do things. That bleeds over" into the club and into those Corvettes.

Growing up in Northport in a family of four kids, Steve Mazzilli says Chris "would always sketch cars on any paper or surface available." When 12 or 13, their father, Angelo, took Chris to see a Don Rickles show at Westbury Music Fair. After Rickles called out his dad for bringing a kid to the show ("you hockey puck"), Mazzilli then fell in love with comedy too.

"My father really loved cars and as a kid he was a street racer," Mazzilli says. "As far back as I can remember, it was always about cars." His dad had to quit a job at Chevrolet to take over the family business, a grocery store in Queens, but "he never really liked it and told me, 'figure out what you love and a way to make a living at it.'"

After college, Mazzilli got into acting, then stand-up. During his apprenticeship, he "carried a notebook around for two years, asking people what they liked/didn't about the typical comedy club. "Women always said the bathrooms were disgusting."

The idea for Gotham took shape — clean bathrooms a requisite — and he and another Long Islander, Michael Reisman of Westbury, launched the club in 1996, with Dave Chapelle as the opener. "Drop-ins," or star stand ups working on material for TV or stadium shows, followed.

Jerry Seinfeld is one. “I don’t have many non-comedian friends, but a Long Island guy who owns a comedy club and lives for cars would be the prototype," he said through his spokesman. "Chris is a good and kind person who has been incredibly helpful to comedians, young and old, for many years. I’m a regular at Gotham because of Chris.”

OK, last question: Cars or comedy, as in which does Mazzilli love best?

"That's like asking 'do I like pizza or hamburger?'" says the Car/Comedy Guy. "I love 'em both."

In the garage a few feet away, an old classic roars to life, shaking the walls and rattling heads. Mazzilli smiles then seems to reconsider. "I love that sound."

THE STORY OF THE 'LOST CORVETTES'

Peter Max had a dream, a wild dream.

Not that Peter Max had any other sort of dream, but this one was different. The wealthy, influential and immensely popular psychedelic artist of the '60s and '70s — think Day-Glo and all the colors of the rainbow wrapped in one turn-on-tune-in-drop-out aesthetic — dreamed that he bought 36 Corvettes.

In real life, the year is 1990 and these Corvettes had just been won by Dennis Amodeo of Huntington Station. The 36, for each year they had been made, from 1953 to 1989 (only 1983 was absent because GM skipped that model year) were part of a sweepstakes promotion by VH1.

Max woke up and decided he must have them. His scheme: To Day-Glo them out, then parade them through Yankee Stadium.

At least half the dream came true. He bought them from Amodeo, then put them in a Manhattan garage, where they sat, collecting dust and notoriety.

Corvette fans wanted to know what became of them. In TV terms, it was a car enthusiast obsession similar to "Is Jon Snow really dead," or "Whatever happened to Tony Soprano?"

The lost Corvettes were indeed lost, but WHERE and WHY? As it turns out, Brooklyn. Then lower Manhattan. Then Harlem. They were usually moved in the dead of night. (Most of them are now back in lower Manhattan, awaiting refurbishment.)

In 2014, covered in nearly 25 years of good old New York City slag, they were finally sold to the Heller and Spindler families, both prominent in real estate. They now plan the sweepstakes, with proceeds going to the National Guard Educational Foundation, and other veteran charities.

The entry details can be found at corvetteheroes.com.

Adam Heller, the CEO of the company bearing his name, says "people flip when they see those cars. When you think of an American sports car, you automatically think of the Corvette." He adds that "they've always had tied to the military and armed forces. We always wanted to do something [for veterans]. It's a really good cause."