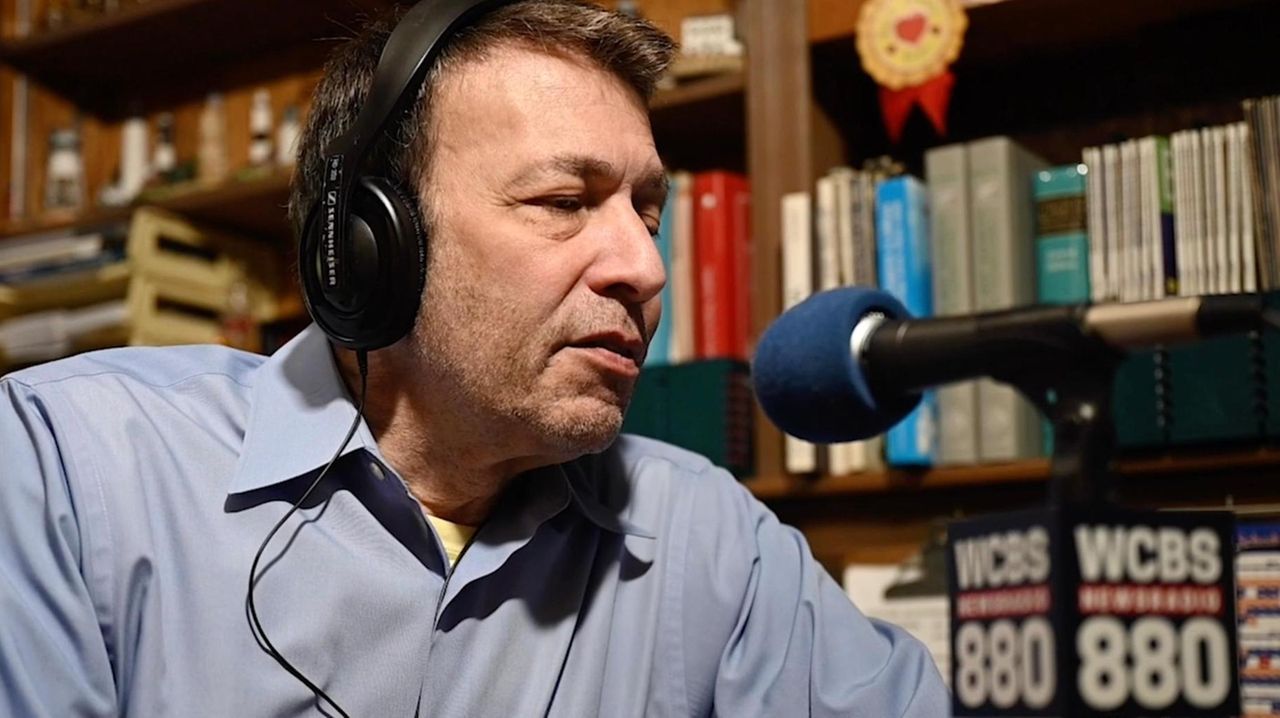 "Not sure whether to hide or go incognito," began Craig Allen's Facebook post on his forecast for Memorial Day weekend.

This being Facebook — and that particular weekend — the veteran meteorologist for WCBS Newsradio 880 was able to do both. Beneath his grim forecast, he added a couple of pictures. The first was of a cute puppy cowering under a bed. In the other, he virtually donned a platinum blond wig and pair of dark sunglasses. He looked like D.B. Cooper.

Professional radio weather forecasters don't make the weather, but by osmosis do become associated with it. Augur the wrong weather, and suffer the consequences with listeners. Get it right, and occasionally suffer those consequences, too.

Allen — 64 and at this predicting game almost his entire lifetime, or since middle school in Massapequa — didn't cause that miserable weekend. Nevertheless, we have to blame someone, or at least blame them subliminally. Allen knows that, too, hence the wig.

"That weekend I knew I was going to be right and knew it was going to ruin a lot of people's plans and be a tremendous setback to opening up again," said Allen a couple of days after the soaker. "I thought about Homer running away from the angry mob — I do a lot of stuff [on Facebook] with 'The Simpsons' and 'Family Guy' memes — [but] watching that system develop, I knew I had to go incognito."

Meteorologists are the infantry of the broadcast news trade. They earn respect, albeit grudgingly (see above), only to see that evaporate with a wrong call. They live in the future, a perilous place indeed, and yet must function in the moment. While you and I might briefly check the sky for clouds to see how our day will shape up, they must study the "models." Their worldview is framed by both a mesoscale one (local weather) and synoptic one (global), each impacting the other in inconceivably complex ways. Sorting through the numbers and models and scales, most of them usually get it right. But when they get it wrong — like so many did, for example, with the Nov. 15, 2018 snowstorm that shutdown the tristate area — they do indeed become the Homer Simpsons of that infantry, in full retreat.

And that is what has made Allen's longevity so unique. In April, he marked 40 years at 880, the longest tenure of any forecaster in New York City radio and the longest tenure of anyone at the station after the retirement of Rich Lamb in February. Over those four decades, he has also worked at WCBS/2, WNYW/5, "CBS This Morning," WPIX/11 and News 12. For years at a stretch, he was on the air seven days a week, on radio from 5 to 10 a.m., and 4 to 7 p.m., then on TV weekends or late nights.

Over most of this stretch — 30 years this month — he's reported for 880 from a home studio in Merrick. That's unique, too, and was unprecedented when he started it. Allen effectively set up a weather station in a ground floor studio, then added an observation deck next to the upstairs bedroom. From there, he got a view across to Norman Levy Park to the west and the Meadowbrook State Parkway drawbridge to the south. It's a perfect vantage point for a professional weather guy to study approaching systems and those all-important ocean breezes. Meanwhile, he's got a cot in the studio for long nights or naps between shifts. His son, Garrett, 29, who lives at home, and his wife, Cheryl, a veteran teacher, now semiretired, rarely see him during active weather days. An approaching hurricane? Forget about it.

Allen admits that he is both a survivor and weather geek. But there is honor in that, leavened with pragmatism. He knows how hard it is to survive in this particular line of work. Challenges loom like approaching thunderheads. You can pretty much check those challenges off yourself.

Drive-time radio listenership largely disappeared during the pandemic, but that might actually be the least of them. Weather information is everywhere now, much of it up to the minute. You can even become your own forecaster, thanks to the bounty of the internet. For those not DIY-inclined, there's always the phone. Siri would be happy to tell you when it's going to rain. Who needs a weather geek for that?

Levittown native Bruce Fixman, who created Phoenix-based WeatheRate.com, which verifies the accuracy of TV news forecasts at hundreds of stations around the country, says that stations "tell us time and again when they do research that accuracy comes out No. 1 of what's most important to the viewer. But after that, they want likable talent."

Accuracy, he adds, is the easy part. "The models now are incredibly accurate. What used to make an accurate one-day forecast 15 years ago is now three to five days with the same level of accuracy."

That leaves the likable part. It's the secret to the secret sauce — Allen's, and everyone else's — but it's also what keeps Siri and the rest of the wolves at bay.

"You have to be personable," explains Pat Pagano, who mentored Allen back in the '70s, and has been the meteorologist for WALK/97.5 FM for nearly half a century. "You can't sound like a computer or be like a robot. You have to relate to people just like you'd relate to family and friends."

Allen, he says, easily has that part down. "He's a real good forecaster, [but] knowledge is one thing, experience the other. He knows the New York metro area. Yes, we all have our pet [passions]. Some [meteorologists] get excited over hurricanes, but Craig is a fanatic for thunderstorms. He gets very excited over thunderstorms. That's his niche. Me? I like a good old-fashioned nor'easter. I can smell storms from one end to the other."

Siri can't smell storms yet, nor express opinions. She/he can't see the whitecaps in the distance off Point Lookout either, or know how the breezes causing that chop will affect snowfall totals nine miles to the north in Plainview. Allen can. That's why he's survived 40 years.

THE IMPACT OF GLOBAL WARMING

He also knows the past is not prologue. Far from it. Everything is changing and he must sprint just to stay even. The single biggest X-factor is global warming.

"There's no denying whatsoever that global warming is taking place," he says, "and that we're the cause." What makes this so manifestly difficult is "trying to decipher" what the weather will do as a result, he says.

Allen says part of the job now is telling viewers that warming simply doesn't mean warming, but rather a whole set of novel complications, many of them counterintuitive.

For example, "the oceans are a heat sink -- they're warming -- so you could still have massive storms from global change because you are now adding more moisture, more water vapor, to the atmosphere. And if you have the perfect ingredients — cold, high pressure to the north — you're going to end up with huge snowstorms more often."

Moreover, such warming raises the likelihood of more wrong forecasts because the past is no longer prologue with the weather either. Just before Superstorm Sandy hit in October 2012, Allen thought he had misread the trajectory of the approaching storm, in part because of conflicting data from the so-called North American and European models and he'd never before seen the path of the one that was predicted.

He caught up in a hurry, warning viewers of the approaching storm surge when he saw water coming up out of the storm drains near his home. He abandoned his studio although his home would barely avoid flooding. Many other homes on the street weren't so lucky.

A METEOROLOGIST IN THE MAKING

Allen had prepared his entire life for something like Sandy. Growing up a few miles away in Massapequa, he was weather-obsessed and the South Shore was the perfect place to stoke such an obsession. As a 13-year-old, he apprenticed with Pagano who gave him his first on-air stints; after college (Stony Brook), he launched a weather service with his mentor that fed weather information to radio stations around the country.

After "I fell in love with the idea of forecasting for the tristate area," Allen would be in luck. In 1979, 880 fired its longtime weatherman, Bob Harris, after learning he'd faked his credentials. A brief association with his successor, Norm McDonald, ended abruptly too. Allen applied for the job and started the day after McDonald left in 1981.

TV beckoned by 1989, but rather than make a lucrative full time jump there, Allen moonlighted. He joined "CBS This Morning" for a three-year run in the late '90s "but I wasn't ready for it. I didn't have nearly the personality for morning TV." Other part-time TV gigs followed, but "after 30 years in radio, what was I going to do? Drop that and go to TV for two- or three-year contracts? Not when I was in my 50s. I always knew radio was more enjoyable anyway. I always had more freedom to do what I wanted to do."

The secret to his longevity is that "he's very good at what he does," says Tim Scheld, 880's news director, "and in this line of work, you've got to be credible. You have to have consistency, a reputation, which is obviously critical, but he also speaks in a voice that people trust and he spent four decades building that trust."

Allen says the voice isn't going anywhere. "I'm actually relaxing a little bit on weekends now [but] I know I'm never going to give radio up — unless someone over there says we just can't do this anymore. I hope I never hear those words."