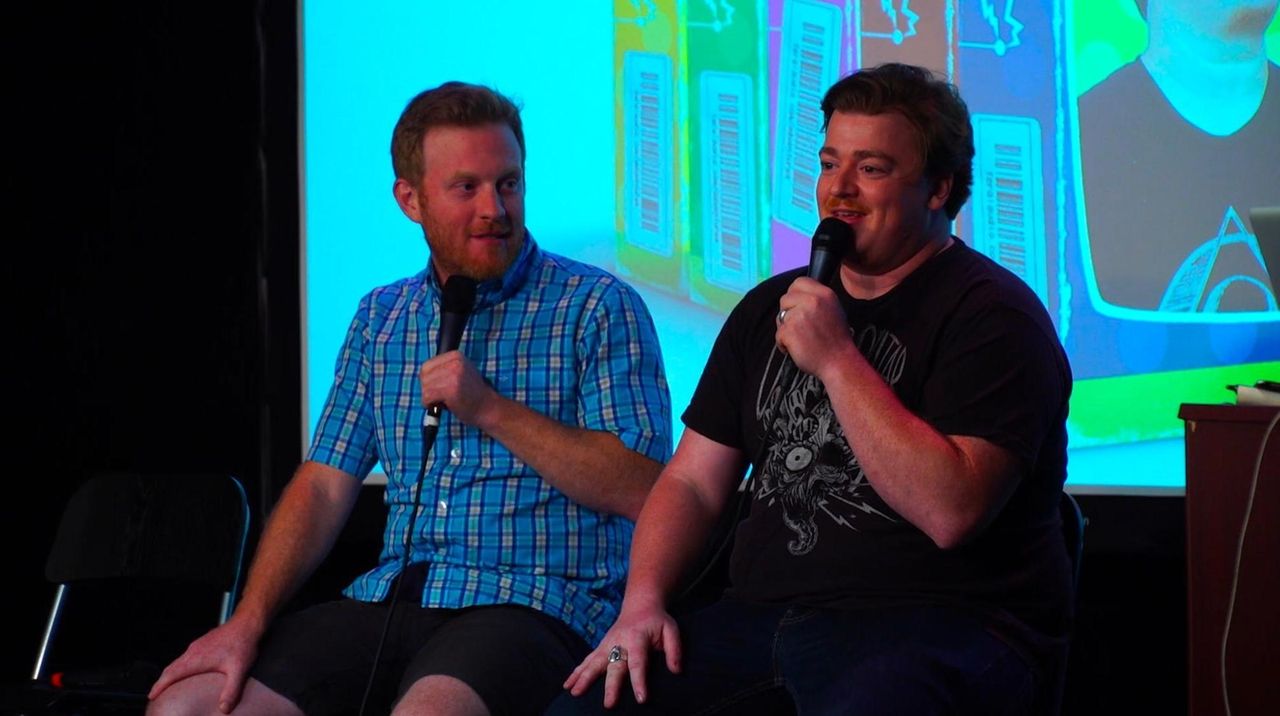 If you were watching Nickelodeon in the ‘90s, you know Danny Tamberelli. Probably best known for playing Little Pete on the offbeat kids’ sitcom “The Adventures of Pete & Pete,” he was also a cast member on Nick’s sketch comedy, “All That,” and the game show “Figure It Out.”

Now, Tamberelli, 37, is reuniting with fellow Nick star Lori Beth Denberg for an “All That” edition of his comedy stage tour, “Nostalgia Personified.” During the nine-city tour, kicking off at Great South Bay Brewery in Bay Shore on Tuesday, they’ll share video clips and behind-the-scenes stories from their Nick days, incorporating improv and an audience Q&A.

Newsday recently caught up with Tamberelli near his home in Brooklyn to talk about the comedy tour, his time growing up on TV and what every Millennial wants to know: what was that Nickelodeon slime made out of?

Here is an edited version of the conversation.

If you had to pick a favorite Nickelodeon show you were on, which one would it be and why?

That’s very tough. Those are three very different things. It’s like apples, oranges and nectarines… Well, I guess nectarines and oranges are similar; that’s a bad one. I would say “Pete & Pete,” I guess, because that’s kind of how I grew up and it was my introduction to being in the industry. It was a really cool moment, and Little Pete is such a cool little dude and I feel like I took some of his coolness with me that I didn’t have as an actual child and just kind of absorbed it.

Hit me with your favorite.
So, some of my favorite Little Pete insults are “Bite my scab, blowhole!” “Eat my turf, chrome dome!” – specifically to a bald man. I mean, you really wanna rib somebody who’s bald, you call them chrome dome. What else… “Suck chowder, jerk weed!” That might be my absolute favorite.

Maybe the most important question I ask you: What was it really like to get slimed?

[Cackles] Well, it was fun the first hundred times, and then it was kinda fun the next hundred times, and then it was mildly fun the other thousand times it happened to me. On “Figure It Out,” they were notorious for just finding any secret slime action that I might do, including “The person’s name is Danny.” I think we shot four episodes a day and they would slime me in at least three of them.

What did it taste like? Because on “Figure It Out,” you would put your head back and just kind of eat it.

Well, truth be told, we were working with vanilla and food coloring, and depending on how much water, you’d get the thickness and consistency. So it’s watered-down, sugary pudding. So depending on the consistency it’s very easy to put it in my mouth. You can see what it did 20 years later by looking at me. You can see it was probably not the best idea, but, you know, I was aiming to please the kids really. I wanted everyone to win stuff on that show. Unless the kid was snooty about it, thinking, “You’re not gonna guess what I did!” then I would go after them, I’d have to. They’re not gonna get a trip to Busch Gardens or go to Cape Canaveral or Smugglers’ Notch in Vermont. Those are the three that I remember. Also, just — Smuggler’s Notch just sounds dirty. I’m gonna go out there and say it.

Let’s talk about your comedy show, “Nostalgia Personified.” It started with a podcast with you and Mike [Maronna, who played Big Pete on “Pete & Pete”]. Did you and Mike always keep in touch, since way back?

Well, Mike and I have been friends since I was 7 years old, and since he’s four years older, we always had that sibling thing, like when I went to high school, he went to college. When I went to college, he moved back to New York. And then at some point, we found ourselves in Brooklyn together basically running into each other and rekindling the friendship that had taken maybe a six-, eight-year hiatus. And then we started doing these reunion shows for “The Adventures of Pete & Pete.” We did a bunch of cities and had a lot of fun doing that and we were kinda figuring out how we could keep the hang going, essentially. So, we decided to do a podcast. We’ve been doing that podcast, “The Adventures of Danny and Mike,” for about five years now.

I wanted to do something that was less talking heads and something that was more interactive for fans, and decided it would be fun to show some old clips of us or things we had done: old commercials from the ‘80s and ‘90s that we’d find online, and that turned into “Nostalgia Personified.”

So now we decided to change it up a little bit and do an “All That” version, and the first person I thought of was Lori Beth ‘cause she’s the best and so hilarious. Mike and I sort of have this real, sibling kind of relationship, and Lori Beth and I have a similar connection. I had a terrible mustache for a long time, and she ribbed me for years about it until I finally gave in. She said I had to cut that dirty ‘70s pornstache, I think is what she said, and I finally did. So that’s the kind of relationship we have and I think it suits the show very well because it’s a lot of ribbing back and forth and you gotta have thick skin, but it’s all in good fun

Is the show basically Lori Beth Denberg and Danny Tamberelli roasting each other?

Sure, there’ll be a little bit of roasting back and forth. There will also be some sketch-y, improv-y stuff that we do on the fly because she’s very good at improvising.  … We tell dirty secrets, which may be a couple stories from being on “All That” or “Figure It Out” that I may not have told anybody, or that LB hasn’t told anyone, that we give people an exclusive, hot, gossipy take on what was going on back in the ‘90s. And then we’ll share clips, talk about what was happening in that moment, make fun of each other for the clothes that we’re wearing mostly, like, “Look at that hairdo”—  I’m sorry, my wife just walked by [with their four-month-old son, Alfie] and derailed me so hard.

What if he (Alfie) in six years wanted to be on Nickelodeon?

Oooh, now you’re asking the good questions. If he wanted to, I would humor him. I don’t think there’s any reason not to. I think the problem for some people is that maybe they don’t necessarily want to do it and their parents might be more interested in pushing. As someone who’s been an actor since he was 6 years old and my parents were really good about making sure I was a normal kid — I went to public school, I played rec baseball and soccer.

If you could guess, thinking of Big Pete and Little Pete, what do you think they would be like as adults today?

Interesting. Well, I think Little Pete probably would’ve taken his band around, toured a little bit. Then he made enough money doing that that he bought his own little rock and roll club that he runs, maybe does sound. Maybe he’s the sound guy there. Big Pete, I would say he became a catalog model. He does all the L.L. Bean stuff. Those are his feet. That’s his slicker.

So there’s an “All That” reboot now…

Yeah it just started. It just happened right before this little boy (Alfie) was born [in June].

It seems there are more reboots and remakes now than ever. Do you think there are some things that shouldn’t be touched, we shouldn’t make another?

I would agree that there are some things that shouldn’t be touched. I think “Pete & Pete” is a perfect right place, right time show that couldn’t get the treatment that it deserves now, perhaps. It would be cool, but I feel like it was such a very specific moment in time where all of these things connected to make that show that I don’t know if you could do that again. Just my two cents. Just re-show it. Nickelodeon, just re-show it. Put it back on the air. You don’t have to reboot it, just rerun it.

“Nostalgia Personified: All That Edition” comes to Great South Bay Brewery in Bay Shore on Tuesday, Nov. 12 at 7 p.m. Get tickets at nostalgiapersonified.com. You can listen to “The Adventures of Danny and Mike” podcast at dannyandmike.com.