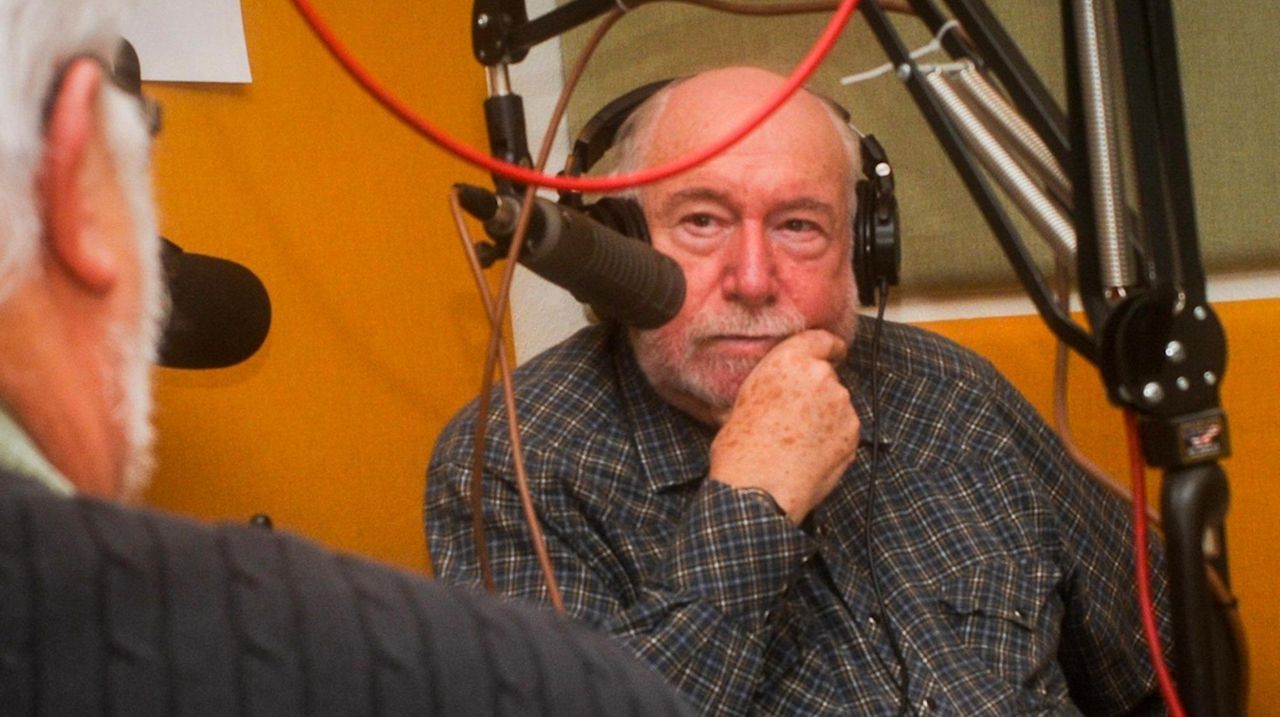 Dave Marash was looking out his office window the other day when he saw a long tail.

Soon, the rest of the mountain lion stepped into view.

From this you may reasonably infer that Marash a.) no longer lives in New York, where he was a radio reporter and WCBS/2 anchor for nearly 20 years, or b.) in Washington, where he was the globe-trotting "Nightline" correspondent for 16.

Home is Tijeras, New Mexico, on the leeward side of the Sandia Mountains outside Albuquerque. It's a long way from the world he once covered over a distinguished and varied 60-year career. These days, the world comes to Marash, 78, who produces a thrice-weekly podcast called "Here & There."

I recently spoke with the veteran newsman. An edited version of our chat:

You grew up in the south (Richmond, Virginia). How did that shape you?

My father was an active campaigner to desegregate Richmond [in the late '40s] and when we moved there my parents bought what I called the last house in the suburbs — on the other side of our back fence was one of six farms, the so-called 40-acres-and-a-mule ones — that had come to African Americans [after the Civil War]. One family, the Lamberts, would become my best friends, and their great-grandmother had been a slave. The fact that I knew somebody who had been a slave and that I could extrapolate what her life was like was something that has stayed with me for a long time.

You went to a fancy college (Williams), then fancy graduate program (Rutgers) to study English. Were you going to become a prof?

I guess [but] I had a fellowship that paid me $2,400 a year, which wasn't enough to live on, and so I got a job at the local radio station [then] an offer to become a freelance reporter for WINS [1010]. I asked if I could keep my teaching assistantship and the [department] chairman said nope, you've got to choose. From that point on — 1967 — I've been a full-time journalist.

I loved doing both [and] the morning drive news anchor there, Jim Gordon — who was a big star and also the broadcast voice of the Giants, Rangers and Knicks — said "just know what you're talking about … "

Why did you eventually stop covering sports?

My last job was anchoring "Baseball Tonight" on ESPN [in the mid-'90s] but by then, television sports had become much more promotional, much more tied to the product. After one year, ESPN and I both agreed we'd made a mistake.

A really fortunate learning experience because I'd never done television [and] got a crash course. But I've always been a union guy and PIX was an anti-union place …. I left a note on the bulletin board that said if you'd like to organize, call me. Thirty minutes later the vp of news did call, and said, "Don't let the door hit you in the butt when you leave."

Then back to radio?

How did Channel 2 get in the picture?

There had been talks for about a year between me and [Channel 2] about going over, always conditioned on the fact that they would only hire me if I would shave my beard … I kept turning them down.

Your coverage of the massacre of Israeli athletes by the Black September terrorist group at the '72 Munich Olympics then changed everything?

It was of course a landmark event in the history of terrorism and basically became my story [for 880]. When I came home, Channel 2 called and said, "All right, we'll take you and your bleeping beard."

Before we leave radio, what was it like being a street reporter in New York of the late '60s?

A wild, wild time … A time of great tensions, great poverty, unrelieved subsistence living in a lot of our ghettos [but] also the year of the Mets, when I first met [outfielder] Ron Swoboda who remains a very good friend. I also got to be Marv Albert's [play-by-play] backup [and] got to call the famous double-overtime game in which the Rangers beat the Blackhawks on a goal by Pete Stemkowski.

The Channel 2 run begins in '73, with you and Rolland Smith, while the 11 p.m. broadcast was to become the top-rated news broadcast in New York.

It was very competitive because [WABC's] "Eyewitness [News]" had Roger [Grimsby] and Bill [Beutel] and WNBC brought in Tom Snyder to try and make it a three-way race but that failed. Rolland and I are still good friends. He remains the incredibly gracious and kindly person that he always was.

You traveled internationally for Channel 2. Did that set you up to become the crusader with an interest in international affairs that you would become?

All of New York [TV news] was really conscious of being the global capital of ethnic diversity and one of our principles was that there were viewers with special interests in every part of the world. But I do think my local instincts helped me because — unlike the network people whose first job is to see sort of a trend and to fit that into a global or national context — the local news guy has to find the local story [and] build from the ground up.

I got to see much more of her co-anchor, Hugh Downs, who remains one of the best-kept secrets in broadcast [with] an incredibly brilliant mind and an incredibly adventurous spirit. I think he's 99 now.

You got a better offer to come back to Channel 2 in the early '80s?

Yes, for a two-year term and then went to WNBC for a really crazy period, in which I simultaneously did investigative reporting and a nightly commentary for the 11 … I was covering too many bases and it made me quite crazy.

Then it got wilder and crazier when you threatened to sue Ch. 4?

They had taken away my commentary and investigations and I contended that they had breached the letter of my contract. They were gonna fight me on this until [NBC owned-and-operated Washington station] WRC anchor Jim Vance admitted to a cocaine problem, went into rehab and they had a vacancy at 11 they had to fill.

So you go to Washington and eventually end up co-anchoring with Vance, right?

Jim Vance [who died in 2017] was one of the greatest news anchors in the history of local TV news and he briefly co-anchored with Sue Simmons there, too — as charismatic, glamorous and intelligent a pair of local anchors as you will ever see … I had almost four years co-anchoring with him, seven terrific years with Rolland, and loved every minute of them.

NBC ordered WRC to replace me with a woman because a man anchor team by then was obsolete … Ted Koppel read the stories of my departure, and said, "Would you like to come work for us [at 'Nightline?']" The beginning of 16 years of professional heaven.

I gotta say, researching this I came across a lot of headlines that said "Marash quits" or "Marash leaves" Is there a theme here?

Every piece I ever [produced] I had the comfort of knowing, "This is my story and I am in a position to answer all the questions viewers or my bosses might have." Obviously, this is a position that has built-in management-reporter tension.

Because network TV news — with certain exceptions — has long expected the on-air correspondent to rely on the producer who reports the story?

Yes [and] the single worst trend I can think of in broadcast journalism then began [in the '80s] when networks started to save money by not even sending reporters to cover stories but purchasing a video of the story from local sources … In the Third World, that local source was the state broadcaster which meant the video you were getting had a political purpose for the most part.

After I'd left 'Nightline' I was gonna make a trip to Russia [which] demanded that I list every country I had visited during the period of my passport. It was 39 countries. So yes, join 'Nightline,' see the world.

How'd you and Koppel get along?

Privately, Ted and I had virtually no relationship, but we both loved what the other did. Ted not only created one of the greatest news shows in television history [but] the greatest workplace …. One of his hard rules was, if it's your face and your byline you better have written every word of the story.

You got a lot of airtime.

As Ted anchored more and more programs, he realized that if he took the occasional night off [from interviewing] and turned it into a [reported news program] the world wouldn't stop. That created opportunities for correspondents [and] Ted would frequently give me the whole show [including] a full hour to document the manifold implications of HIV/AIDS in Zimbabwe, which had wiped out a generation.

Well, I'm proud to say, Ted and I left on the same day. I was told they were gonna go in a new direction and it was one I wouldn't be caught dead doing. I was quite happy to leave.

You join Al-Jazeera as its top American anchor, then split after a couple years. Your post-mortem?

It broke my heart because they were shooting themselves in the foot journalistically by assuming a kind of political position that didn't always apply and there was a tendency to view the United States as more corrupt … The exaggeration often got in the way of really informed reporting and I would call them out on this … In retrospect [going there] was a mistake and you could call it a career killer because people don't really want to hire alumni of Al-Jazeera [but] I don't regret going.

"Here and There," your podcast, seems like one of your proudest achievements. True?

I try to do stories that are of local and regional interest but also wider interest, which guarantees me that every week I'm going to have three really stimulating and somewhat demanding conversations.

It's a tremendously difficult moment for journalism — the "fake news" nonsense, the cutbacks, the challenge of covering two global crises. Yet great journalism informs and inspires. What most inspired you?

You get to deal with a lot of war criminals and truly awful people but you also get to meet some of the greatest people in the world, and Ibadete Thaqi [who as a girl lost both legs to a Serbian booby trap] was one of those. She went to the Hospital for Special Surgery in Manhattan where she was outfitted with prosthetics [and then] they trained her how to make and fit them. The hospital later hired her [and] she now has two beautiful children … She's a real New Yorker down to the core and to see her maneuver with her two canes onto a crowded subway is really a heart-lifting sight. That is probably my single favorite "Nightline" story.