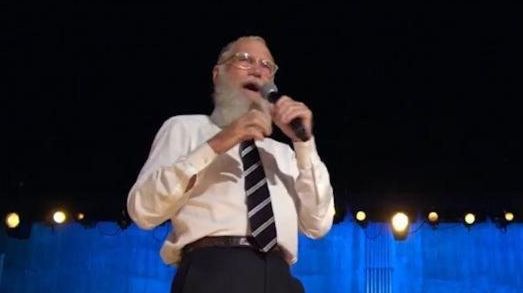 David Letterman’s much-anticipated return to talk television finally has a launch date: Next Friday, Jan. 12. Netflix confirmed Friday morning it will stream the first of six Letterman talk specials then, with former President Barack Obama as the first guest.

News of Letterman’s launch broke in a slightly unorthodox way –-- on an ad posted on Vanity Fair’s February e-edition, which went out to subscribers early Friday morning. In the ad, a beaming and bearded Letterman -- also in tie -- is standing next to a beaming and clean-shaven ex-president (no tie). “My next guest needs no introduction,” per the ad’s tagline.

TMZ reported last month that Yousafzai –- the Pakistani activist who has advocated on the rights of women to education and also the youngest Nobel Prize laureate (she is just 20) -- will be his second guest.

When Netflix announced the series last August, it said in a news release that the series will combine “two interests for which he is renowned: In-depth conversations with extraordinary people, and in-the-field segments expressing curiosity and humor.” Each episode will feature one interview with “a singular guest,” while Letterman will also “explore topics on his own, away from the studio.”

Letterman – who wrapped a 33-year late night career in 2015 – also appeared in a Nat Geo series in October 2016, “Years of Living Dangerously,” in which he traveled to India to explore the country’s efforts to bring electricity to millions without power. The Newsday review was positive — in the “bottom line” saying, “Former late-night talk show guy goes to India, reports on global warming, cracks occasional jokes. Also makes a plausible case for a second career act” — while further noting that while this was not a “full-fledged ‘second act’ just yet, for all we — or Letterman — know, this could just be the intermission.”

In an interview last summer with The New York Times, he indicated he wants to do more pedagogic-like TV in this vein.

As former colleagues know, Letterman has a serious side, with serious interests. Some speculated that retirement would be short-lived and that Letterman might turn up on radio in a Sirius-type interview program, or back on TV in a similar format.

In a statement when the deal was announced, Netflix’s chief content officer, Ted Sarandos, said, “Just meeting David Letterman was a thrill; imagine how exciting it is for me to announce that we will be working together. David Letterman is a true television icon, and I can’t wait to see him out in the wild, out from behind the desk and interviewing the people he finds most interesting. We’ll have to see if he keeps the beard.”