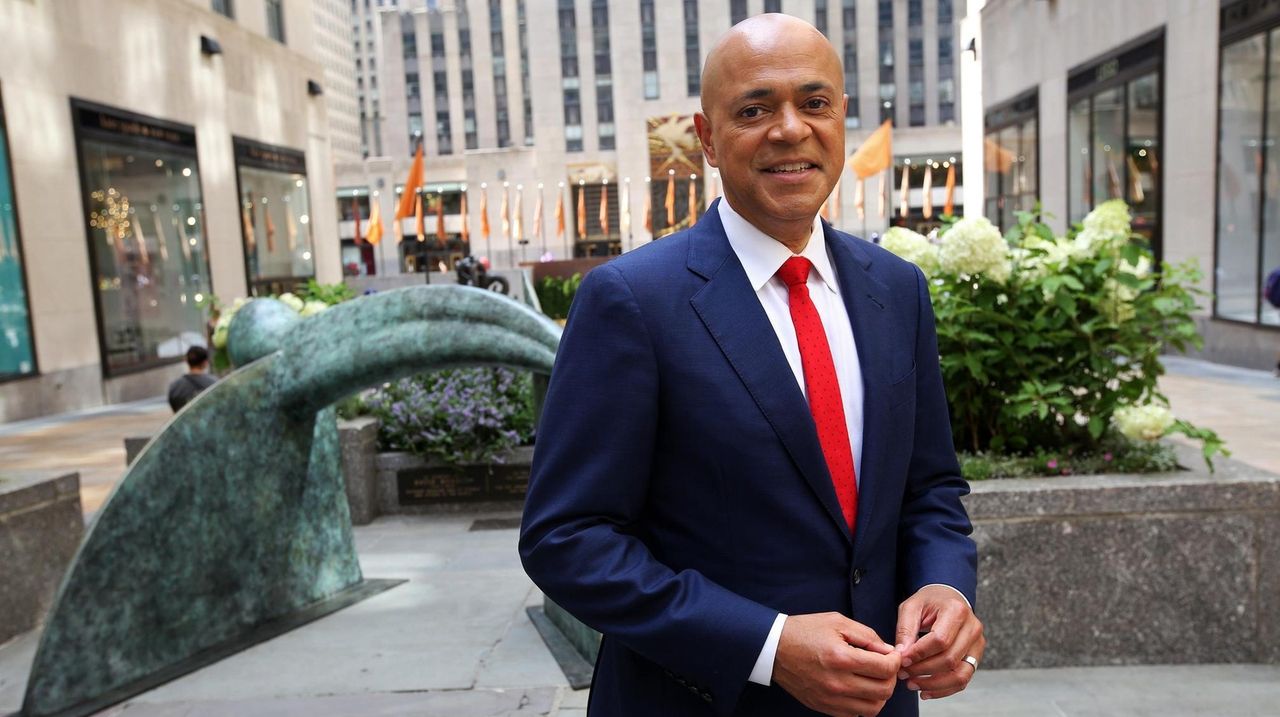 David Ushery will be co-anchoring the 4 p.m. and 11 p.m. editions of “News 4 New York.”  He will join co-anchor, Natalie Pasquarella, on both shows starting in early October. Credit: Bruce Gilbert ; Getty Images

What makes a first-rate TV news anchor? "Trust" and "experience" and "screen presence?" Or easier to point to someone as an example? If so, a lot of viewers have been pointing to David Ushery in recent years.

WNBC/4's Ushery has been on New York TV so long (nearly three decades) that this Hartford, CT. native almost seemed to have been born during a newscast. He did grow up on one, the Hartford edition of a nationally syndicated show ("KidsWorld") where he was named host at age eleven.

[Laughs] I graduated high school still hosting the show [and] I kind of went to them and said, you know I'm going to college [University of Connecticut] so maybe it's time I go …. In college, I didn't know what I wanted to do. Thought maybe politics, then picked up a couple of journalism classes [which] led to some print internships at the L.A. Times and Hartford Courant [then] got into a training program [at Hartford's WFSB].

I came down one week to interview a few days after the first World Trade Center bombing in 1993 … I was thrown in every corner of the five boroughs, every corner of Long Island, from Riverhead to Nassau, and got to learn these neighborhoods in a way that I treasure now on the anchor desk. [Station management later said,] 'we're going to start a local weekend Sunday morning show to combine with 'GMA,' and so my first co-anchor job was with someone I still work with today, Sarah Wallace. From there, it just kind of unfolded.

The run at Ch. 7 came abruptly to an end. What happened?

It was a gut check moment about a lot of things[but] I never thought of it as a bad breakup. There are evolutions in our business and [then] an opportunity [at Ch. 4] came up — the weekend 'Today in New York,' which was a totally different realm for me, and offered a lot of breadth. It just felt like a natural evolution for me to go here.

In mid-aughts the 5 p.m. broadcast you co-anchored with Sue Simmons was dropped for a soft infotainment show and you were suddenly anchor-without-portfolio. What happened?

It was a tumultuous period for the entire business and remember that everybody was trying to figure out how to make money [while management] thought this lifestyle show was maybe a way we can cut back news and make some bucks …. No anchor likes to lose his or her show [but] we all just had to endure and get through it but what's gratifying for some of us who lived through that is how the pendulum has swung back, and we got back to aggressive news gathering.

One of your early series was about kids and violence, which I believe, stemmed from your experience as a tutor teaching kids in Harlem?

That story was post-Rodney King, and we went into urban New Haven and other areas trying to get at some of the very same questions we're all asking ourselves today — trying to get at this disconnect between law enforcement and how some communities feel they are being unfairly targeted. But yeah, when I got here to the city I tutored at a church in Harlem [which was] so rewarding [and] I've looked for other opportunities like that along the way to stay connected.

You do spend a lot of time speaking to students, but at a keynote address to Black high school students some years ago told them they'll have to be "twice as good" to get around the impediments they will face in their lives and careers. Have you ever experienced racism in your own?

People may have shunned me when I tried to interview them. Perhaps it could have been because of race but I can't say that directly. In terms of systemic racism or systemic impediments and inherent biases, we just have to be honest about that. I know for example what it's like to be followed by security in a store or yellow cabs not stopping for me. I wanted to be honest with those students. We are all figuring out our way to confront things. You do not hear me saying I did not get this because of that. We all have to figure out how to navigate [racism] and confront it [but] what I can do at the end of the day is bring my effort, best work and follow through.

The symbolism of becoming co-anchor of one of New York's most important news sources cannot have escaped you. What does it mean on a personal level?

It's a big deal for me on many levels. I come at this with a 28-year-relationship with the New York viewer and for all those reasons I outlined earlier. [But] let's also acknowledge the times and it is a critical time for the nation — the reckoning, if you will, which is a word that we hear a lot, and it's not lost on me, in this perch at this time in this city. We've got to face some headwinds: COVID, community and cop relations but also commercial real estate and what it's gonna look like in this city going forward. Our schools, too. We're in for some challenging times and as a New Yorker and one who's been through a lot of those times, it's right where I want to be.