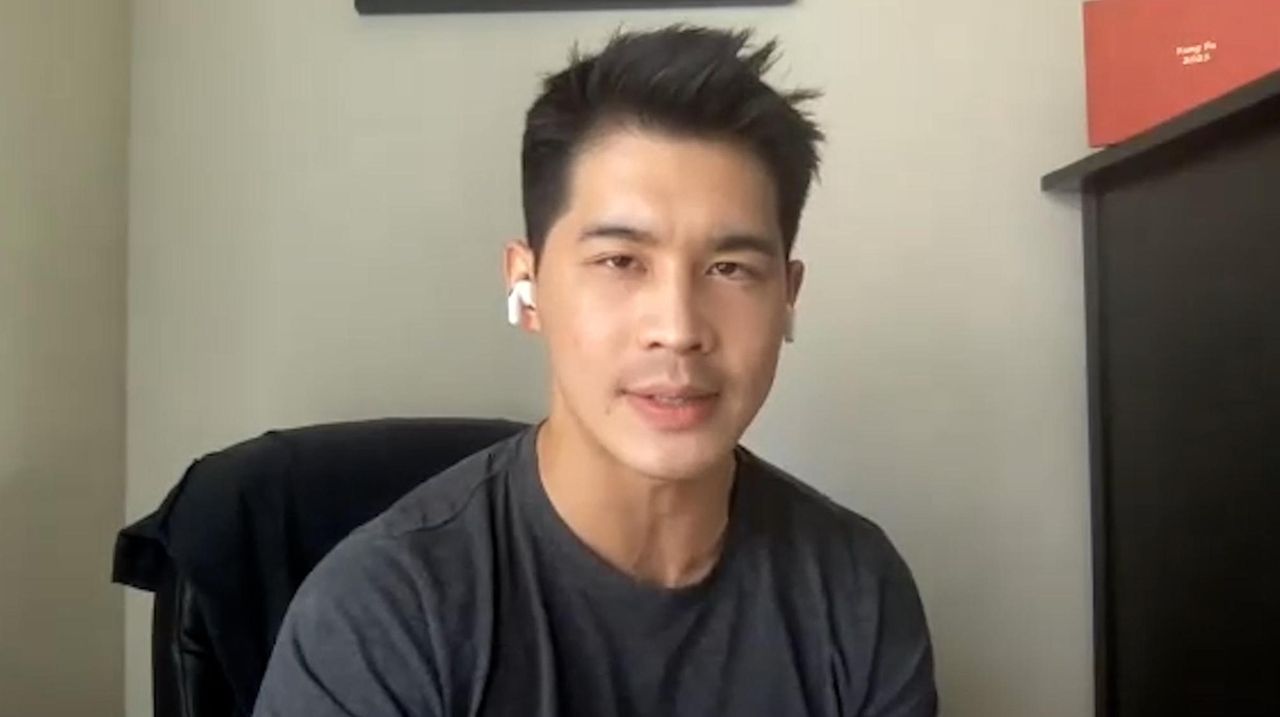 Commack native Eddie Liu stars as Henry Yan in The CW's "Kung Fu." Liu spoke with Newsday TV critic Verne Gay about how he got his start as an actor. Credit: Newsday / Verne Gay

To become a working actor is hard enough — but one who is the son of immigrants from China and who grew up in Commack? That has its own set of complications, indeed. Eddie Liu, 30, is that son and that actor, star of the CW freshman hit "Kung Fu" — a very loose reboot of the 1972 martial arts western starring David Carradine, which wraps its first season June 30.

Set in the present day, it stars Olivia Liang as Nicky, a law school dropout and vigilante whose love interest is Henry (Liu), also a martial arts (Tai Chi) expert.

Then, there is this: "Kung Fu '' is the first drama on a commercial network with an all-Asian cast.

Born in Queens, raised in Commack, Liu went to Hofstra, later studied acting at the William Esper, then got modeling gigs while working as a professional trainer near home. Then came Hollywood, where he booked guest spots on a few shows, including "NCIS: LA," and a three-episode arc on "Silicon Valley." Until "Kung Fu," the big break was Mindy Kaling's Netflix roman-a-clef, "Never Have I Ever."

Newsday's Verne Gay spoke with Liu recently about his journey from Commack into the TV history books.

What did mom and dad do job-wise? They ran a jewelry business together [Ideal Jewelry by Jasmes, in the Gateway Plaza Mall in Patchogue], still do, so I kind of grew up behind the counter a little bit [where] I just kind of learned how to talk to grown-ups, build rapport, gain simple people skills. It's actually really helped me along the way.

I was so busy and looking back it feels like a bit of a rat race. I think we were all caught up in the whirlwind of trying to be as impressive as you could be — to get into the best school, get the best job, succeed as much as you can. That's a very common experience for children of immigrants.

Any idea what you wanted to do at the time?

I really felt like I wanted to be a guidance counselor. I took career tests and a lot of results pointed towards either social or educational — either helping people or working specifically with people. Something like entertainment?! Nah, that's crazy …

At Hofstra you studied …?

Public relations. I had the gift of gab [but] I remember a sociology professor talking about authenticity and the take-away was, 'what does it mean to be authentic to yourself?' and that resonated [and] I definitely felt like 'OK, this is my window of opportunity to really explore find what I want to do …' Then by chance, someone recommended me to a nearby acting studio.

[Then] as graduation approached, I booked a P.C. Richard commercial. The Great Recession was happening and job prospects looked awful, but I just couldn't escape the thought that I wanted to be an actor — but it was also like, how do I justify this to my parents who are paying for school and I'm about to pull a 180 and flip everything on its head. I was terrified to tell them.

How did they react?

My mom was fully supportive but dad had trepidations. He was very very cognizant of the lack of Asian representation on the screen so he was really concerned for me.

Your dad is a wise man. There weren't many opportunities.

Very very little [but] at the time back then, people were telling me — including later my manager — 'hey, it's changing. Your time is coming. Just hang in there.'

That's a lot of pressure on you — from your parents' expectations and the simple fact that Hollywood had a long, long way to catch up. How did you navigate that in your head?

A friend gave me advice I'll never forget. She could tell it was laying down heavily on me and she was like, you know, 'if everybody you care about was gone tomorrow, what would be the first thing you did for yourself?' It sounds morbid but I also knew what she had been dealing with — the idea of mortality because she had just lost her mother to ovarian cancer. I realized I just didn't want to be the guy five years down the road who got the job he was supposed to get but deep down hated himself for not going after the thing he really wanted. I didn't want to carry that resentment.

OK, acting school, modeling, commercials, personal trainer...what was the Big Break when you finally got you out to L.A.? The first big thing was 'SIlicon Valley' -- just had a few speaking lines and it was recurring, but I got to [even] pitch a joke to the showrunner Mike Judge. I was like, holy [Jeez], I just collaborated with Mike Judge!

"Kung Fu" of course is a hit. What does it all mean — for you personally?

It's been an opportunity on so many levels — and of course Asian representation. I definitely felt that lack [of representation growing up] to the point that it was almost normal for me not to see myself [on TV]. We've had a white heteronormative male lens on the world because that's what's been presented to us and that has been ' normal' for as long as we've known, and to now change that and to have the chance to shift that paradigm and break the mold? It's such a gift.

Did you ever expect it to happen this quickly?

It's simultaneously surreal and yet it feels right. But there is a constant ebb and flow between having a hard time believing that this is a gift just to do this job and also being able to take that ball and run with it. Yes, we deserve to be here, yes, we belong and — by the way — yes, you should watch our show because you'll have fun watching.

But it's really given me the opportunity to reconnect with my heritage. I grew up in a white suburban town in Long Island, and the environment around me didn't make me feel safe to own that heritage. I can't say that's other people's fault, but I do regret not taking more of an initiative to take ownership myself — to be more prideful in who I am and where I came from.