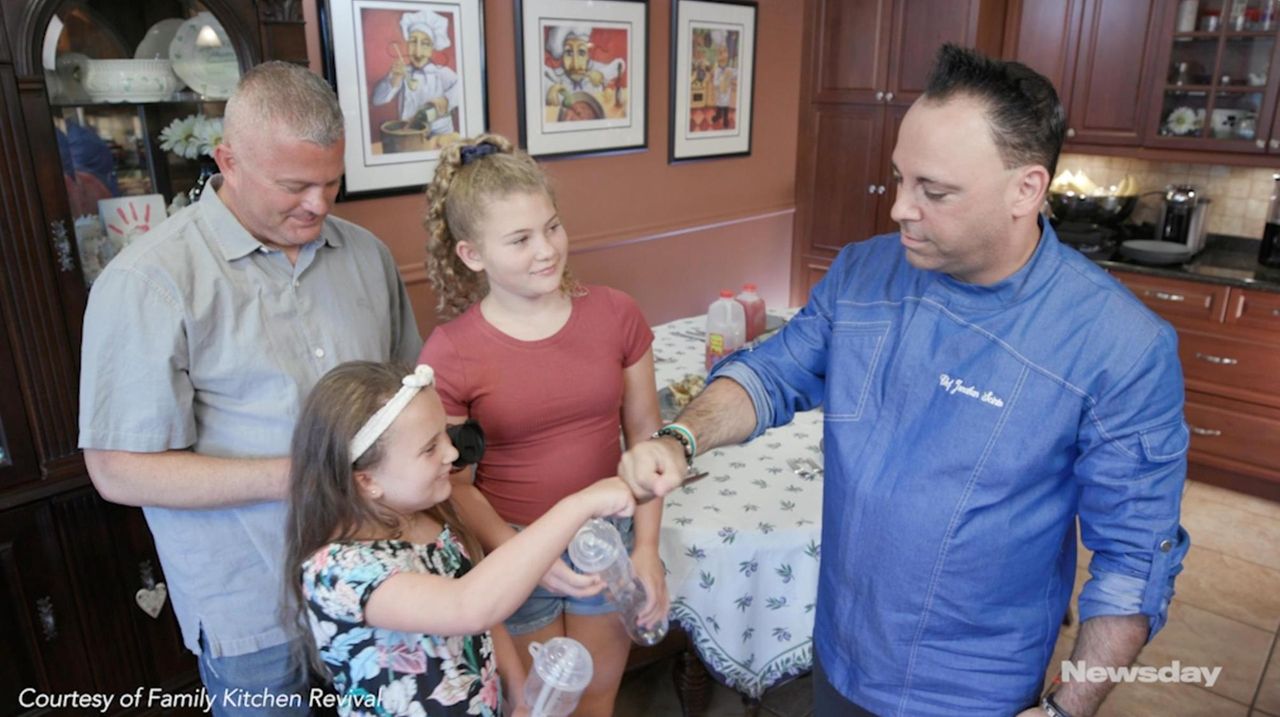 Jonathan Scinto, 44, of North Bellmore had an idea: What if food could ease someone's grief? Could a once-cherished recipe revive buried emotions? Summon memories? Offer solace? In whatever modest way possible, could food help?

And that is "Family Kitchen Revival," an eight-part series that launched on Amazon Prime in November. Each episode features a Long Island family, each suffering from loss, in some instances, unimaginable loss. Scinto, a celebrity TV chef, arrives at their door and listens to their story. Then, together they cook.

I spoke with Scinto, AKA "Chef," recently, but first, his story: Father to three daughters, married to AnnMarie, he's been a contestant on "Chopped" and "MasterChef," also a contestant on Walmart's World Food Championships (where he's finished third, and is also competing in 2020). A graduate of New York Institute of Technology in Old Westbury, he's catered across Long Island, and worked as a professional chef in Manhattan.

Then, there's this — "Chef" is a part time actor, too, and recently had a bit part in "The Irishman," credited simply as "cook."

Meanwhile, the families profiled: The Beadles, Bellmore; the Waldecks, Wading River; the Millers, Lindenhurst; the Cadmuses, Hauppauge; the Blums, Seaford; the Englands, Central Islip; the Needelmans, Valley Stream; and the Strianos, Riverhead.

Tell me a little bit more about you.

I was working in client services in the food industry in Manhattan [and] after 9/11, went to work for the Culinary Academy of Long Island [which closed in 2016] in Syosset. Five years ago, my wife, who knew I wasn't happy and knew a passion of mine was to be in front of the camera, saw 'MasterChef' was auditioning and said 'just do it'. I wasn't looking to get my fifteen seconds of fame and wanted to turn it into a brand-new career. I didn't last long on the show, but it was an opportunity to market myself and to get my vision out there.

And "Family Kitchen" is that vision?

I was thinking about the show for three years, then remember waking my wife up at two or three in the morning, and she's thinking, 'here we go again.' But my thought was, let's do this on Long Island. We don't have to do this in California, but in my own backyard. We could turn a light on Long Island communities where people come together and help each other."

I suspect there is a personal connection for you in all of this, correct?

My mother [Alison] passed away from an aortic aneurysm [in 2010]. I've also had some physical challenges myself [so] the connection to food became really strong for me. I had to watch what I eat and become a better cook as a result. My mom didn't like to cook. She used to just make a potted chicken and it was so much fun to make with her. [After her death] I started to think about a show — it's not just the food [but] about the person you cook with, who you spend time with. It shows how powerful the connection with food is.

How did you reach out to these families?

We started looking for people last July and had a website so people could go online and submit a video — a few minutes explaining their story and its connection to food. We got hundreds of submissions.

These are especially difficult stories of loss. How did you handle them?

Absolutely, and I was not prepared for some of them. I didn't have a clue until I got to their homes, sat down and started talking with them. I had to compose myself [and] my wife said, 'it's the first time I've seen you cry since we were married.' It was an amazing and humbling experience for me but I don't think it's tragic. It shows there is hope and how families and communities can come together. There are so many crazy things happening in the world now, so much anger and hate, and hopefully this will inspire others who are going through something like this — that there is hope.

What did you learn about grief while going through this?

That the power of food can heal when you're going through tough times, by using that food as a way to say that 'I'm cooking a meal for you, and giving back to you my love and passion …' They're giving back to people who helped them.