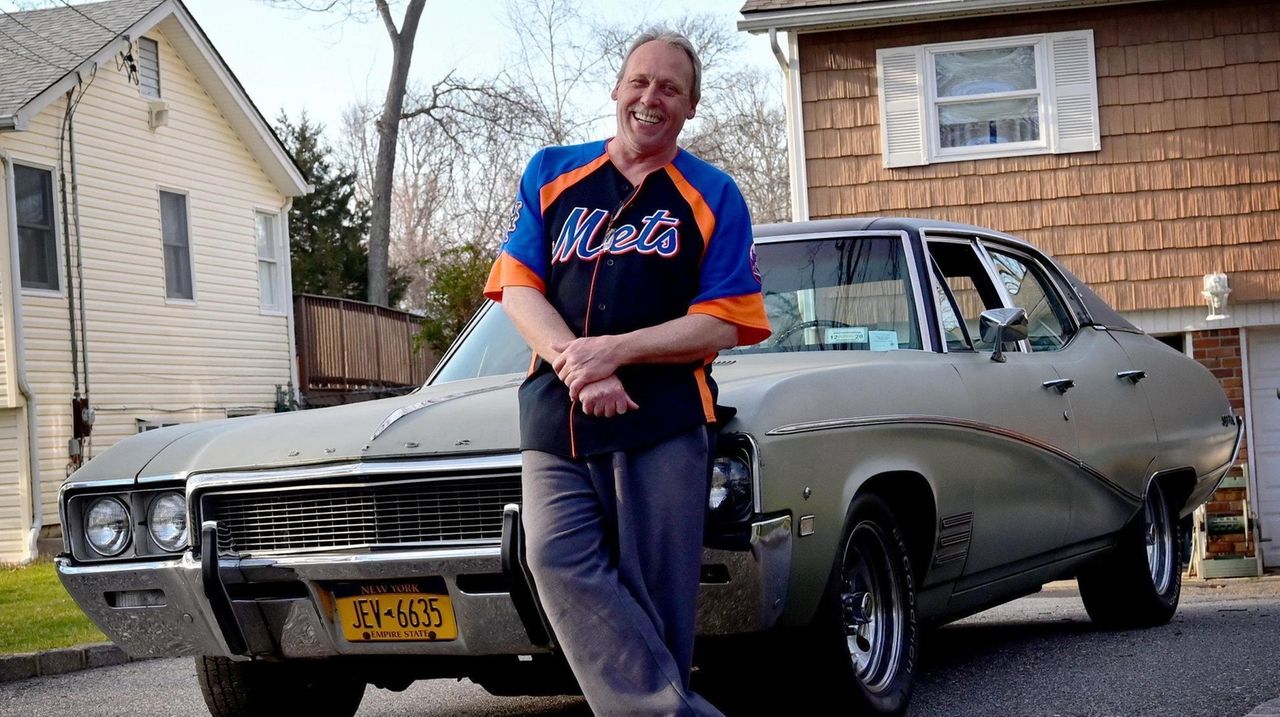 Tim McGovern of Selden was a contestant on the game show in 2005. Credit: Newsday / Thomas A. Ferrara

As Long Islanders have settled behind closed doors these past few weeks, many have held tightly to a TV comfort blanket. With so many to choose from, which one would that be?

The clues: It's TV's oldest genre, and most durable, with show titles that run in the hundreds, and retreads by the dozens. We might never have imagined a world like the one we now find ourselves in. We might have a harder time imagining one without this.

Why this primal devotion? Why this love affair? Why this comfort blanket?

Why do we love game shows so much?

ABCs  "Who Wants to be a Millionaire" returns Wednesday — the "20th anniversary edition," with Jimmy Kimmel as host and celebrities playing for charity over eight episodes. To celebrate this unsurprising (but admittedly welcome) return, I spoke with five Long Islanders who themselves were game show contestants.

They have the answers.

Jamie Vargese grew up in Philadelphia, where she became a die-hard "Family Feud" fan. She now lives in Woodbury with her husband Brian, an X-ray tech at NYU Winthrop in Mineola, and children Claire, 4, and Carter, 8., and may not have the devotion she once did, but when a casting call came to Philly, she and sister, Julie, along with cousins Jesu, Dhanya and Danny put a video together and applied.

Then waited some more. That's a common theme among applicants, by the way. They assume their application is lost, then the call comes when least expected. After they were accepted, they went to Atlanta where Steve Harvey's edition of "Feud" was taped in 2016. As she recalls, "The recording of the actual show" seemed to take hours, but was cut "down to 20 minutes." Producers were "always looking for a lot of interaction" between family members and host, yet when they later watched at home, "we said, 'why didn't they use the other answer or 'that would've been better.'"

That episode finally aired on Oct. 26, 2016 and only then did friends learn of the final outcome of her mysterious trip to Atlanta six months earlier: They'd won $20,000 and were eliminated in the second round.

Varghese says the experience takes on a whole new meaning right now: "Whether you watch ['Family Feud'] or not, it is a national show, and it is lighthearted and funny." She adds that it's "a bonding experience for families" because it was for hers.

Mary Ellen Krupa calls herself "the legacy of a game show contestant" winner.

Or half a winner. Her mother, Joan, won on "Concentration" in the mid-60s, but a stint on "Jeopardy!" decades later didn't end so well. On the cusp of victory, her mom missed the easiest of questions (Art Carney of "The Honeymooners." Answer: Who is Ed Norton?)

Krupa later submitted a video to "$100,000 Pyramid" as part of her application but belatedly realized that "I came across as [too] shy."   She then applied to "Wheel of Fortune" and that outcome was much better. Her appearance aired in 1986, while the three-day run culminated in $19,000 in winnings.

"Back then it was all prizes, no money," she recalls. "I won a boat but had to sell it for tax reasons but had a fun day in the city with the Gucci gift certificate."

Krupa, 60, had some serious health issues a few years ago which has left her disabled, and now works part time at Remember Yesteryears in Oakdale — "the largest antique store on the Island," she says.

But she still cherishes her game shows. They "keep the blood flowing through the brain" and are "timeless," she says. "Something about the thrill of participating in something even if good old Alex Trebek" doesn't know that she's out there in the viewing audience. But she is. Every night.

Tim McGovern is a big guy with a big personality who holds down a job where both are likely valued. As a lineman for the Metropolitan Transportation Authority, he's one of a couple dozen men needed to position rails on tracks that are deep under Manhattan and Brooklyn where he is based.

McGovern, in other words, does not seem like your Typical Game Show Fan.

In fact, this father of two proves another salient fact about game shows: There's no such thing as a "typical" fan but there are certainly memorable contestants. He's one of them.

After applying in 2005 to get on the syndicated version of "Who Wants to Be a Millionaire," hosted by Meredith Vieira, he later went through a battery of questions and an in-person meeting with a producer. "They want to get a feel, I guess, for your personality. 'Would he be alright for TV or just sit there like a dud?' They want people who are kinda lively."

On the day of his taping, he figured he'd have time to settle in. He figured wrong. When he went into the green room, the contestant immediately before him was "in there bawling her eyes out. She'd gone out on the first question."

McGovern was then summoned. With the camera rolling, he was asked: What ceramic material is often used to describe fair and flawless skin? a) Porcelain b) Stucco  c) Earthenware.

"I figured it had to be porcelain," he said, before remembering "that my wife had porcelain dolls at home and that some had developed some cracks on their faces, and then thought, 'well, maybe it's not porcelain, after all.'" He recalled that inconsolable contestant before him, and in a panic, turned to the audience for help.

"They voted '97 percent porcelain.' So that was a waste of a lifeline."

Nerves once settled, McGovern got into a groove and his inner comic came out too. Asked "where U.N. secretary-general Boutros Boutros-Ghali is from," he played to the room: "Good old Boutros. He's a good friend but he never told me where he was from."

Egypt, by the way.

Vanessa Verni of Medford  is a 6th grade social studies teacher at William Paca Middle School in Mastic Beach. That's by day (or was for the time being). By night, it's all game shows.

Not all night, perhaps but she is supremely skillful at them, thanks to a lifetime of practice. The 27-year-old who grew up in Brookhaven hamlet, "first started getting into the idea of doing a show while watching 'Wheel of Fortune' growing up. Then one day, the contestants were so bad that I started yelling at the screen. 'The strategy is not there!'"

"Passion" and "yelling at the screen" are essential personality traits of the true game show fan. They're big on "strategy" too.

Verni, who lives with her boyfriend, Joe Ganz, applied to "Wheel" three years ago and easily made the cut. Her episode, which was taped in early fall 2017, aired on Dec. 17 of that year. The episode theme was "Home for the Holidays."

"What are you wearing?" was the clue.

As she now recalls, the last word of the clue was "'-ittens,' or something to that effect," but the contestant before her called for a "k." The game show pro in her knew "that you can't wear a kitten" then called out the right letter — "m" — for "warm woolen mittens."

While official records are hard to come by, Verni may be — take a deep breath — the most successful single-day contestant on a game show in Long Island history. She won $58,000 in cash and prizes that day.

She is also one of the few to have appeared on two game shows: Fox's "Beat Shazam," with college friend Nicole Costanza, last year. They came in second place and split $11,000.

She calls game shows "everybody's guilty pleasure. I feel like some people don't advertise the fact but secretly they'll be watching reruns at two in the morning, especially now, while you're home and you can get into it and get to see people celebrating when there's not a lot of celebrating going on at the moment."

Laura Mogul, executive director of Landmark on Main Street in Port Washington where she lives, may the youngest adult "Jeopardy!" champion in show history.

"I was eighteen years old at the time, and had a lot more brain cells then I do now [and] people kept pressuring me to get on." She did, in 1973 when Art Fleming was host, and Don Pardo the announcer. The Barnard freshman then won — as an adult.

She may also be the only contestant to appear twice (not counting returning champions for special episodes or editions). The show was owned by Merv Griffin Enterprises when she first competed, and then she applied again in 2016 when it was a Sony property.

She appeared on a March 2016 episode where she went into a tiebreaker, with the category "Oscar winners." Mogul bet her entire pot of $11,000, and lost.

When the show finally aired, she says, she couldn't bear to watch. "I took my dog for a walk."

Nevertheless, "it was a great experience. I'm sorry I can never do it again."

Growing up in a "real, real serious 'Jeopardy!' household" in East Norwich, Mogul had watched the show since she was ten. Like all "Jeopardy!" lifers, she understands the intricacies and appeal of this singular franchise, or "gold standard," as she calls it.   "Timing, not just speed," is what counts," she says. "If you get to the buzzer too early, you get locked out."

She admits that she's thought a lot about this show's hold on her.

"I think it's that the people up there [on the screen] look like you and you could be them. They know things and you know some of those things. It's not like it's that esoteric. It's relatable, and when someone gets something wrong, you think 'how could they not know that?' You also develop this love/hate relationship with long term champions. You have intensely held opinions about them. It lets you feel smart when you know what they know."