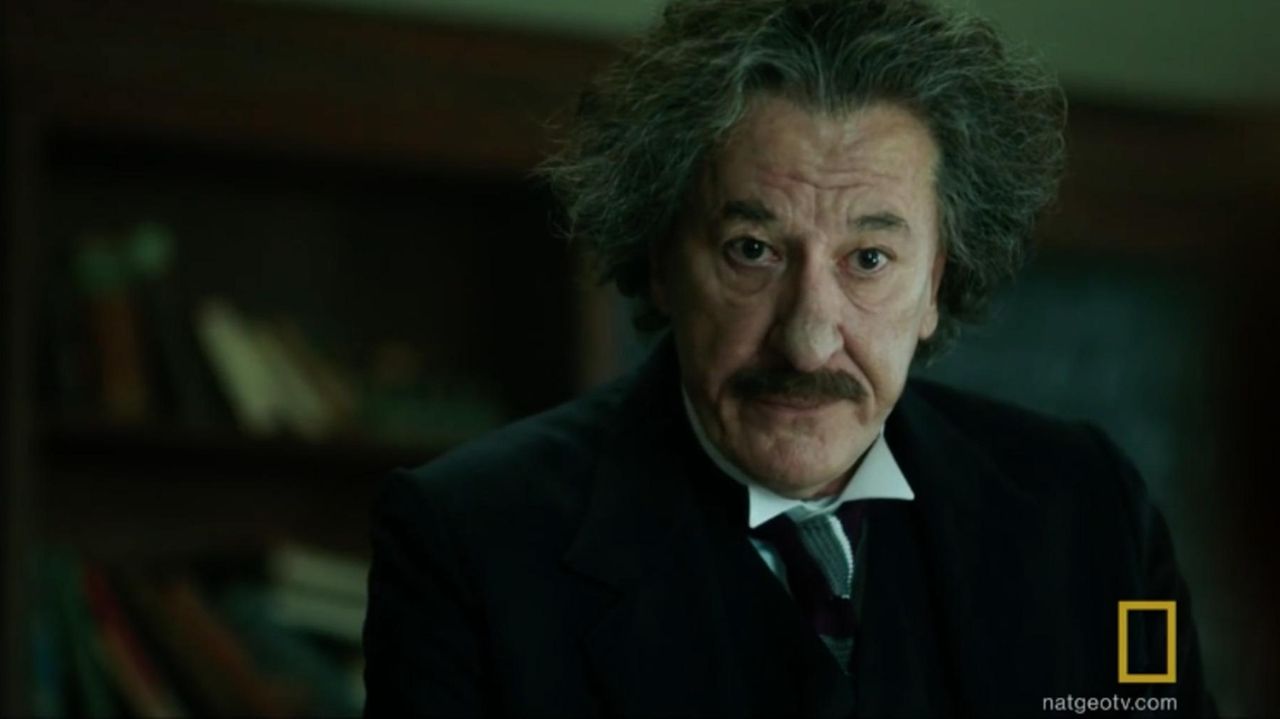 WHEN | WHERE Premieres Tuesday at 9 p.m. on National Geographic Channel

WHAT IT’S ABOUT National Geographic Channel’s first scripted series — 10 hours — is an adaptation of Walter Isaacson’s “Einstein: His Life and Universe” (2007), starring Geoffrey Rush as Albert Einstein. The first two hours toggle between the life of the younger Einstein (Johnny Flynn) and Einstein in 1922, just after the assassination of his friend Walther Rathenau, foreign minister of the Weimar Republic, murdered by right-wing proto-Nazi terrorists. Also starring Emily Watson as Einstein’s second wife (and first cousin), Elsa Löwenthal. This is a Brian Grazer and Ron Howard production.

MY SAY You know you’re in for a bumpy 10-hour ride through the space-time continuum of Einstein’s life when one of the first scenes reveals him grinding against his secretary.

Bumpier still when, as a callow lothario, he blandly dismisses the affections of a potential spouse with this line: “I’m not sure I want to spend life with someone who can’t carry on a compelling conversation on the nature of things.”

Ah, what nature of things would that be, Albert? We find out soon enough:

“I’m head over heels in love with your mind,” he tells future wife Mileva Maric (Samantha Colley), while both are under the sheets.

And with that, the bumpy ride comes in for a crash landing. “Genius” is idiotic.

Nat Geo sent reviewers copies of Isaacson’s “Einstein” — a nice gesture, also a mistake. The book is intelligent and briskly readable. “Genius” is unwatchable. Here’s at least one problem. On page 360, Isaacson writes, “throughout Einstein’s life, his relationship with women seemed subject to untamed forces.” And yes — the book certainly does touch on those untamed forces. “Genius” wallows in them.

Some viewers may want to see the — ahem — “human” side of Einstein, but those will also concede that the considerable intellectual accomplishments should be incorporated as well to some degree. For example, in 1900 Einstein was just about five years away from publishing the so-called annus mirabilis papers, which included the theories of special relativity and mass-energy equivalence. The Einstein of “Genius” that same year has the apparent intellectual heft of a gnat and the libido of a Don Juan. This Albert had better hurry up: He’s only got a few years to change the universe, and even he’ll agree that time moves pretty fast (especially when you’re having fun).

But “Genius” doesn’t just skate over the science, it ignores it. Yes, the science is hard. It’s also the only reason you should watch.

BOTTOM LINE Only the first couple of hours were available for review, so “Genius” could still grow a brain. However, early evidence suggests brainlessness will prevail.